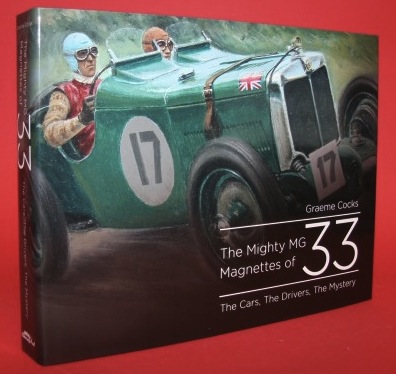 “Sources are contradictory, particularly when it comes to which car raced where and when. The various theories based on the available evidence are examined in the text and wherever possible the proponents of the theories are cited. Some researchers, however, preferred that their name was not attached to their ides. This has been respected.”

Hmm, people who know stuff but don’t want to go on record. Just how incendiary a story is this??

Just to get, and hold, the attention of non-MG folk let’s dispense with some preliminaries so as to establish this book’s relevance for anyone dealing with universal questions regarding the authentication of important automobiles. This is becoming an ever more pressing issue, especially in regards to race cars whose value is in large measure affected by their competition history. Almost 2/5th of this book examine in detail the forensic challenges attached to one particularly important MG K3, chassis K3003, that may or may not have a clone (possibly sold that way by the company itself, no less!) and that has kept the cognoscenti on their toes: “For 50 years, the story of this car’s history has been debated in MG circles; or perhaps, more correctly, this MG debate has gone around in circles.” Fifty years is a long time, and even after this supremely thorough book, a definitive resolution remains elusive—as elusive as the actual, physical mystery car or, for that matter, the existence of its driver during the period in question—although author Cocks makes a good case for one particular reading of the facts.

The five Mighty Magnette team cars on which this truly mighty book focuses were the first batch of a total of 33 six-cylinder supercharged competition cars produced 1933/34. It takes some effort to think of MG as “the largest and most progressive motor manufacturers of the time” especially in view of the fact that it was ERA who quickly assumed the mantle of dominant contender in the small-displacement class in which MG’s now legendary 1100 cc K cars swept the leader board for the first few months of 1933, beating even Maserati on their home turf, the Mille Miglia (with big-time drivers Earl Howe, Tim Birkin, George Eyston, Count Lurani, Bernard Rubin and Hugh Hamilton elbowing each other on the podium) before Tazio Nuvolari took a K3 to victory at the Ulster Tourist Trials. All these folk and others, along with designers and mechanics are profiled here.

Of the two prototypes and three team cars discussed, four survive (their stories traced here to the current day) but none of the people who once built and drove them do. This makes writing a definitive historical book all the harder, especially as Cocks is committed to do some major housekeeping in the MG literature and exorcise the kinds of sloppy mistakes that stem from one author mindlessly parroting another by regurgitating secondary sources instead of going back to primary, original sources. Cocks has done this, as he has before in other books of his, consulting race reports, period publications, and a host of marque and restoration experts in Europe, North America, and Australia. While this does make the world a better place, the reader who will struggle the most with the nuanced new bits is the one who already has internalized the MG canon and now has to spot in the new text those crucial bits that need to be unlearned.

The book is very well written and organized. An accomplished Australian motoring historian, Cocks presides over his own publishing house and has the skills and resources to produce high-level, all-round impressive work. Among the hundreds of illustrations are a few colored photos from the 1930s, very much a rarity. Period and modern-day photos of the cars are augmented by ads, technical drawings, fine art, and assorted ephemera. All are splendidly reproduced and printed on substantial paper held together by properly sturdy cover boards, and the book is nicely designed and typeset with only few, minor typos.

To return once more to K3003: owned since 1984 by Australian collector Peter Briggs who commissioned this research, the car has been taken to bare metal twice during his custody and the process documented photographically. The forensic efforts, though, predate Briggs, involving at one point even Scotland Yard experts. Appended are several thoughtful treatises on the question of provenance, the practical and philosophical implications of keeping a racecar original as it is being repaired/rebuilt repeatedly, and the sleuthing a seller, buyer, restorer or auctioneer has to engage in to establish with certainty what they have in hand. Other Appendices deal with K3003 specifics pertaining to ownership and restoration as well as race results. Alas, no Index. 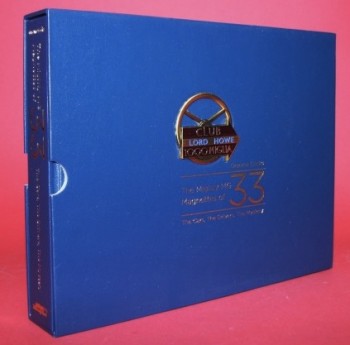 In the unlikely event that none of the above rings your bell but you are a well-read enthusiast of British racing of that period, know that the book offers a few new insights into Tim Birkin and Australian driver Bernard Rubin.

Also available in a premium leather-bound, slipcased edition limited to 150 numbered copies at $450/£295.

Motoring Past Vintage Publishing, 2014   [in US: Dalton Watson]