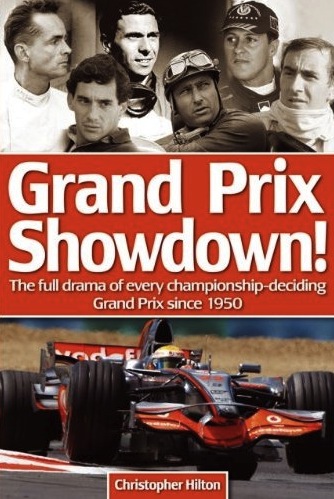 The Full Drama of Every Championship-Deciding Grand Prix Since 1950

A nail-biter! You do not have to be a petrol head or F1 groupie to become totally engrossed in this book! But you do have to have a sufficiently long attention span to follow the written word, not skip ahead, and take time to savor the drama the author so purposefully built into his story arc. A book like this is kind of the counterpoint to “A picture is worth a thousand words.” Here, it takes a thousand words—figuratively—to paint a picture but, unlike a picture, the author can control, by his carefully considered choice of words, the impact his pacing and tension have on the reader.

Motorsport historian Hilton has a long string of racing books to his credit and especially his best-selling biographies of Ayrton Senna, Michael Schumacher, and Clay Regazzoni show his aptitude for combining the personal with the technical.

First published in 1992 this book is a revision of the earlier text and updated with the 16 racing seasons since then and 2008. It chronicles in the form of race commentary the one race in each F1 season since 1950 that settled that year’s world championship. The focus is on the men (alas, no women yet!)—thirty champions from fourteen countries and five continents—not the machinery. Hilton describes the key events in each race that played a role: weather, tires, strategy, circumstance, accidents, etc. in blow-by-blow chronological order.

The Preface recounts the absolutely epic last race of the 2008 season in which Lewis Hamilton who finished fifth almost accidentally snatched the championship from a devastated race winner Felipe Massa. If by the second page you don’t have sweaty palms, this book is wasted on you. And if you watched the race on TV, reading this story will make you relive the full rollercoaster of human emotion you felt that day. You couldn’t make up a more gripping story if you tried and Hilton tells it with full command of the nuances. Not every year was that turbulent but each year, and each man, has its own drama. Many big-name F1 protagonists have contributed insights and recollections to this book and the narrative is peppered with often extensive quotes and excerpts from a variety of race reports, biographies, and statistical reference works.

Things to consider for a third edition: 1, clearly state which race in the season we’re talking about. It says something about the dominance of a driver or team to know if the championship was decided early or late in a season. 2, list the winner of the constructor’s championship. This would speak to the quality of the competitors. 3, show layouts of the circuits. The text makes extensive references to specific locations, the relevance of which is lost on the reader who cannot visualize the circuit. 4, list the winner’s grid position at the start. Winning from pole is a different achievement than clawing your way through the field

The photos are in typical Haynes fashion bundled into two stand-alone four-page sections. But they seem a bit of an afterthought. They do not show every world champion or every year and are rather unremarkable in selection (sometimes merely random shots of a random moment in the race) and composition.

One Appendix lists each world champion (by year, with career statistics), another the championship-deciding race by year/circuit/country/no. of laps/average speed, the six top finishers in order of time (the top finisher not necessarily being the world champion) and by team and time, and the three highest-ranking drivers that season by total points. The Index lists people only.

If you are an F1 aficionado, Hilton’s writing style will grab you by the lapels and leave you breathless. Moreover, he gives you a thorough sense of context and better sense of appreciation for the different challenges each driver and especially each generation faced. If you are a reader in the US and new to F1 what better way to find out what all the hubbub is about, especially given the recent surprise announcement of a return of F1 to the US in 2012 for a 10-year engagement on a brand-new purpose-built track in Austin, Texas.

Alpine & Renault, The Sports Prototypes »
« The Battle of Britain