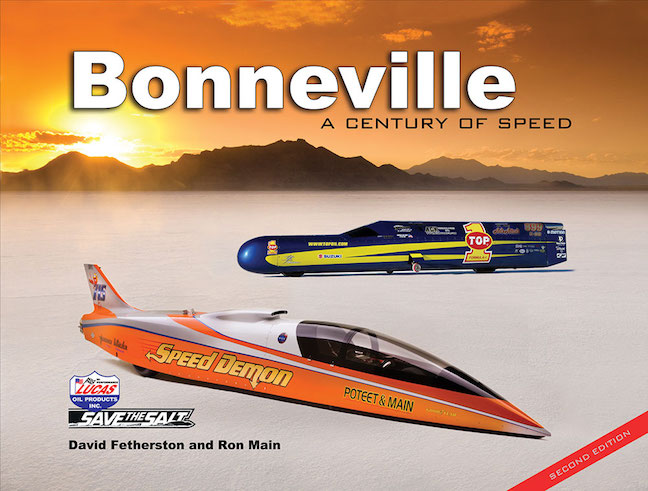 Great intentions do not always result in great work, and so it is with this book. The first edition had the dual purpose of covering a century of Bonneville speed trials history, as well as raising funds for the Save the Salt Foundation, a nonprofit U.S. 501(c)(3) organization whose mission is to protect the Bonneville Salt Flats and promote its history and motorsports legacy. The latter purpose raised $40,000 for the foundation. This second edition, an expanded reprint, was created (same ISBN) with 26 more pages and 65 more photos, covering the 2014 season.

The book is organized into nine chronological sections, from 1899 to 2013, with the first section talking about land speed racing in other parts of the world. There are seven additional sections focusing on various aspects of the sport.

The best aspect is the photography, with color images that most would have only seen in black and white when originally published in magazines “back in the day.” Fetherston is to be congratulated for including photo credits in the captions rather than burying this information in a mind-numbing list in the back that only the most die-hard ever really parse.

However, while a good job is done identifying the cars, the people pictured often are not. The layout can be characterized as “scrapbook,” with minimal effort devoted to graphic design in deference to quick assembly, although the large typeface will be welcomed by older eyes.

The body copy is written with the presumption that the reader comes to the text with a familiarity of motorsport nomenclature as it is sparsely explained. Unfortunately, factual errors are rampant, making this reviewer wonder if any fact-checking was done at all. Here are a few examples:

Page eight begins the salt’s century tale, but the date of the very first race, the very first record is wrong—although well-recorded as August 12, 1914. The authors would have readers believe speed record-setting began in July.

Page 10 says the Lincoln Highway grand opening was in 1926 whereas it was the Victory Highway that opened on June 13, 1925 with Ab Jenkins winning a $250 bet and not the paltry $10 stated.

Breedlove is credited with breaking Tom Green’s 413 mph record when in fact it was Art Arfons with a 434 mph new mark in 1964. Breedlove also gets false credit for being “the first person to exceed 400, 500 & 600 mph.” He was, instead, the first American to set records above these marks; it was Britain’s John Cobb who exceeded 400 mph in 1947, followed by hot rodder Mickey Thompson in 1960.

On page 150 it says that Rollie Free set his first US National speed record in 1949 after Speed Week. But Free got into the history books by riding stretched out prone, wearing only his bathing suit on September 13, 1948. There are many more such errors, but with 146 more pages and 33 years to go, this reviewer gave up cursory fact checking on page 151.

With its altruistic goals of supporting a very noble cause—the book has succeeded in being quite effective. In context of where this book belongs in telling this chapter of automotive history, at best, the photos carry the weight whereas the text should be regarded with great caution. One can only hope that a third edition will be thoroughly vetted.

This review appears courtesy of the SAH in whose Journal 271 it was first printed.