Legends of the Open Road: The History, Technology and Future of Automobile Design 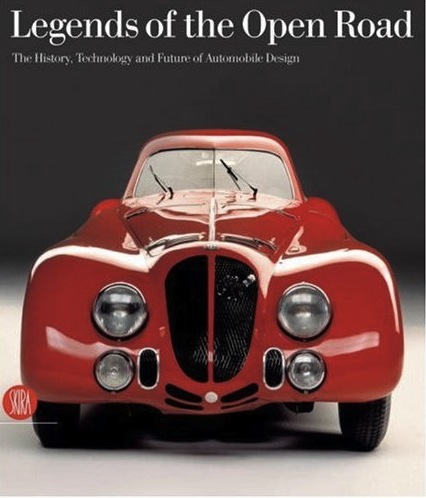 “A century of history has not sufficed to understand the phenomenon of the car, which never appears with a single facet, but changes constantly with the changing of the economic and cultural state of our society.”

The “Mart” (Museo di Arte Moderna e Contemporanea) logo on the title page and the following three pages of densely printed names of staff, collectors and donors etc. are your first clue that this book might have something do to with a museum show. And so it does, the 2006/07 exhibit “Mitomacchina, Motor Car Design: History, Technology and Future” which sought to explore this most iconic manifestation of the progress of civilization—the motorcar—in the context of its influence on and being influenced by culture and society.

Far more than merely a catalog of the show, the book is a fully fleshed-out, high-level, even brilliant scholarly reflection upon an item that by and large has become so commonplace as to have become an appliance—no longer deemed worthy of reflection by the very masses who use it daily, unthinkingly.

From the outside this massive 6-pound, 2” thick rectangular silver slab looks like the very embodiment of the coffee table book. Not that this is in and of itself a desirable or useful attribute—but it brings with it certain expectations. Often enough such books simply become part of the décor, never to be touched again except when you dust, and their main purpose is to make a “statement” about the person who put it on display. This book, on the other hand, with a diminutive title arranged in a highly stylized manner on the perfectly flat spine, will first draw and then hold the eye of anyone who bothers to open it, regardless of their predisposition towards matters automotive. And it isn’t just because of the 1000 photos; in fact, it’ll take you over 100 pages to even get to the serious eye-candy.

Unlike so many museum catalogs in which museum functionaries struggle to rope in a subject matter that often enough is outside their area of expertise, the people who collaborated on this book know their cars and history. Beginning with museum director Gabriella Belli’s Foreword in which she poses the question, “Are not economic production and artistic creation, today as yesterday, the two faces of a single problem?” the first three essays explore social, economic, and anthropological facets of the place of the car in the life of Man. Skip these bits at your own peril! They are brimming with Deep Thought and worthy of considered attention. A host of other voices of various culture, design, and automobile specialists joins in along the way and the many strands of inquiry are far too complex to be adequately summarized here.

Even in the very nice English translation it helps to have an ear for the rather elaborate Italian syntax. Paragraph-length, nested sentences may require several attempts before they yield their insights. Essays about and by car designers (Pininfarina, Giugiaro) examine the key theme, the swinging of the pendulum between form on the one end and function on the other. Individual sections cover the basic genesis of the automobile beginning with Cugnot’s 1769 steam wagon, car design from the carriage days to the 1940s and from then to the 1973 oil crisis. Already in this choice of topics you see the many factors outside of mere esthetics that can and do affect car design. Other sections cover the evolution and nomenclature of body styles, today’s and tomorrow’s dream cars and up and coming designers, the relationship between cars and cities—some 100 of the book’s 560 pages are devoted to such theoretical exercises before some 71 specific cars are put under the microscope and in front of the camera’s lens.

Divided by type of car, and within that chronologically, each model is presented in 4–6 pages of which about half a page is text and the rest photos. The text, written by a number of contributors who each are identified by their initials so that you can look them up in list of contributors, gives basic context for the marque, designer and model, and highlights technical, construction, and most especially design features. This is done in uncommonly competent manner and the only reason to single out just two of the writers is that their work should be quite well known outside of Italy, Raffaele Gazzi and Adolfo Orsi. Make, model, year, specs, current owner, and photographer or photo source are stated for each car. There are no photo captions but a “Summary of Items” section at the end shows each featured car, in page order, along with other pertinent artifacts from the exhibition that are captioned. These serve a documentary, not an illustrative purpose which accounts for the fact that, say, construction drawings are so small as to be utterly illegible at the matchbook-size they are shown here. A final section presents 38 1-page mini bios; there is no Index.

It is as true as it is redundant to say that the cars are mostly European. Remember that the displays for a museum show have to come from somewhere—and the closer the cars the simpler the logistics. While this diminishes the scope of the show it does not undermine its observations and the narrative makes plenty of reference to, for instance, relevant American designs and designers.

We mentioned the flat spine earlier; while there is in this case an undeniable esthetic appeal to the angularity of the binding, a book this thick really would have befitted from a rounded spine so as to increase its longevity. As befitting a book by art publisher Skira, paper and photo reproduction are top-notch.

Last but not least, professional museum folks too ought to be interested in this book because director Belli has useful things to say about curatorial issues and her museum’s mission and methods. In that regard a few words about the Mart itself are in order. Built in 2002 by Swiss architect Mario Botta it was envisioned to become one of the significant museums of modern art in Europe—in a town (Rovereto, in Italy’s Trentino Alto Adige region) of a mere 35,000 inhabitants and with little or no tourist infrastructure. And it has succeeded, thanks to intelligent stewardship and exhibits like this.