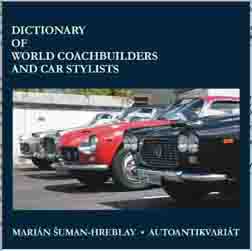 Originally published as a book but now only available in CD ROM form, this impressive reference work lists all of the well known—and numerous not-so-well known—car coachbuilders and stylists in the world. The 3174 car coachbuilding companies and design centers, and 1161 car stylists and related personalities from the end of the 19th century to the present that the book covered are increased on the CD to 4000 and 1550 respectively. Who knew there are this many!? “Car” is here meant to refer to companies that use[d] passenger car chassis, or in some later cases platforms, for their bodywork creations, some of which were not necessarily designed for passenger transportation. Suman-Hreblay is a member of the Society of Automotive Historians and a widely published automotive writer who lives in Slovakia. This book is similar in concept to his 2000 compendium Automobile Manufacturers Worldwide Registry. Both these works are eminently useful reference sources even if one can’t very well say that they make bedtime, or cover-to-cover reading.

Following an initial short glossary on body style terms the book lists clearly and concisely, in alphabetical order, cross-referenced entries stating the main name of the company followed by the full company name, country of origin, active period, and location. Brief historical comments are made, often listing marques and models that have been bodied or re-bodied. The better-known coachbuilders receive in many cases fairly extensive and useful information.

Mixed into the alphabetical order, in italics, are a considerable number of car stylists’ names with, again, additional information in many cases. This reviewer finds it intriguing to learn, e.g., that the artist Geo Ham styled automobile coachwork in the 1930s. Apart from building complete bodies for cars it is interesting to note how many companies specialized in hardtops, sunroofs and other bodywork components. Some, like Budd, or Ambi-Budd in Germany, delivered complete pressed steel bodies for series production cars.

The dictionary, with all its complicated entries in numerous languages, is remarkable for containing hardly any misspellings. This reviewer would, however, have expected cross-references in a few cases, cf., under “Barclay” there is no reference to James Young, Gurney Nutting or Ranalah.

Unless you have a very specialized interest in these subjects, this is the kind of book that you may perhaps not think you will ever need—until, of course, you do! Like a professor friend of mine once said: “Unless I have my literature around me I do not know what I know.” The Bibliography is comprehensive.

Copyright 2010, Lennart Haajanen (speedreaders.info)
(Haajanen is a retired technical writer, secretary of the Swedish Bugatti club, and author of several books, among which the excellent Illustrated Dictionary of Automobile Body Styles)

Driving Forces: The Grand Prix Racing World Caught in the Maelstrom of the Third Reich »
« Alpine and Renault: The Development of the Revolutionary Turbo F1 Car 1968 to 1979