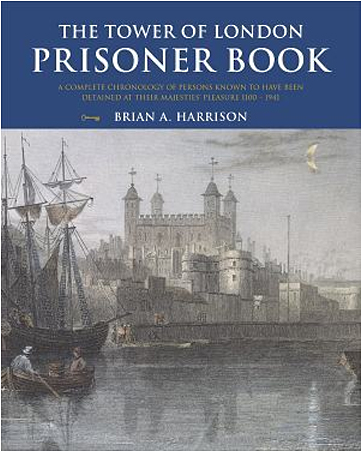 “If it should ever befall that the Tower of London is called upon to perform its traditional role as a state prison once more, this author advances this plaintive appeal for more diligent record keeping, be it only for the sake of posterity.”

The only way to find oneself imprisoned at the Tower garrison these days is as a member of the active military who has committed some sort of infraction. (In which case you should not expect to find your name in a future edition of this book as it only lists state prisoners.) Author Harrison has been to the Tower, at the Tower, in the Tower: he lived there as a warden, which, nowadays, means tourist not prisoner duty!

If your birthday falls on an August 15th you may want to give a thought to the curious circumstance that the Tower’s first and last prisoners were processed on that date—841 years apart. The first one, a bishop, escaped (which was just as well because six years later he was “restored to favor” which wouldn’t have done him any good if he were dead), the last one, a German prisoner of war, was executed.

It’s hard to say just who would “need” this sort of book but, clearly, people want it. In fact, it owes its publication to the fact that visitors to the Tower who found the wardens consulting their little black books in order to answer questions about prisoners became “aggressive” when told that this was only for internal use and not available for sale. Author Harrison is the man behind that briefing book, he calls it a précis, which saw three “editions” in very small numbers.

It was already in his first year as a Yeoman Warder, after a 23-year stint in the Army, that Harrison overheard a guest of the Royal party during the Tower’s 900th anniversary celebrations ask about the number of people imprisoned here over time—and not be able to get an answer! It is really rather shocking that for all these hundreds of years no one in this important and notorious institution paid any mind to history and took the small trouble to record such particulars. (The Tower does have a Book of Prisoners, actually a series of books, kept under lock and key at Beauchamp Tower, but it is incomplete and inconsistent.) Harrison right away determined to apply himself to that task and within only a few days happened to connect a date he had come across in one place with a name he had chanced upon in another. He gave himself 10 years to do the job; 30 years later he’s still not done and it was, in fact, with misgivings that he let himself be talked into publication of this book which first appeared in 2004. 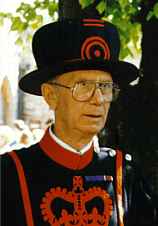 To appreciate how far Harrison has come consider that his digest contains over 8000 case histories whereas the last-known attempt at an “official” list in the 1950s contained 1,826. By the time he retired from the Tower in 1998 after 21 years of service Harrison had become its honorary archivist. He has searched far and wide to put this puzzle together and, often, the search is as random today as when he started: a name here matches an alias there and a verdict there. Lots of paper shuffling and a good memory are the keys and also the reason why this is a never-ending task. To tame all this randomness, Harrison has organized his book into columns listing in uniform manner the year, prisoner’s name, reason for imprisonment, and outcome. An introductory chapter explains the methodology (don’t skip it!). A quarter of the book is given to Appendices: bulk committals (i.e. more than one prisoner committed at one time and treated the same way), inscriptions (by prisoners, on walls etc.), an annotated map of the fairly large facility, a very wide-ranging glossary, a long bibliography, and a very thorough index including alternate spellings.

No matter how reluctant you might be at first, once you start turning the pages there’s no stopping!

A bit of trivia: erstwhile Maryland insurance broker and latterly prolific US writer of military/science-themed novels Tom Clancy is an Honorary Yeoman Warder.