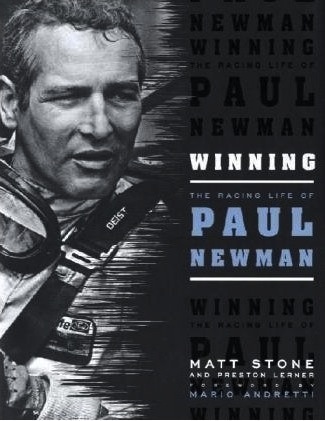 by Matt Stone and Preston Lerner

The terms actor, philanthropist, and racer combine to describe only one man, Paul Newman. Although he didn’t begin his driving career until age 47, he developed quickly and competed into his eighties, eons beyond other competitive drivers. Written around the time of his 2008 death, this book focuses sharply on his racing career, wisely leaving his acting, philanthropic, and family lives for other authors and readers.

To many longtime racing fans, Newman seemed ageless, as if he had discovered some magic elixir that rejuvenated him every time he strapped into a race car. He drove mainly on road courses, everywhere from Nelson Ledges to Le Mans, but also on dirt ovals. He drove not only professionally prepared Porsches (the wicked 935), and Fords in the great endurance races but also karts and sprint cars, often just for grins. For multiple generations of American males, he was a hero. He may have been a Hollywood star, but at the track his humble “one-of-us” attitude meant that he was accepted by racers, who were unimpressed by other forms of fame.

One gripe. The book’s designer unfortunately chose to set the text in a sans-serif typeface then screened it slightly, so the resulting slightly gray type can be subtly difficult to read. Luckily, the sidebars are in 100-percent black ink. In balance, the photography is excellent, and the personal race record and index make the book much more useful.

Author Matt Stone, who also wrote McQueen’s Machines, makes the inevitable comparison between the two as drivers and describes Newman’s work on several racing videos. Apart from Newman’s own (pun intended) long career of competition driving, the book details his many years as a team owner, his voice-over work on the movie Cars, and even his souped-up personal cars. What comes through most clearly, though, are Newman’s true dedication to and faithful love of racing, along with the valuable assistance that he gave, through his teams, to young professional drivers who would be around long after PLN left us.

Porsche: Brochures and Sales Literature, A Source Book 1948–1965 »
« Two in Celebration of the Porsche Speedster