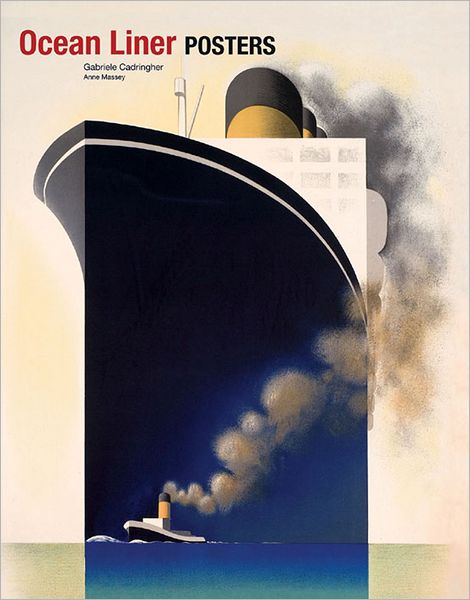 Ocean-crossing passenger ships did not make the world a global village but they were, especially when steam replaced (or augmented) sail which allowed them to overcome the capriciousness of wind and current, the first and for quite a long time only means of personal transport to different parts of the planet on a more or less repeatable and predictable basis. Their place in the history of mobility is thus singular, both in terms of technology and social impact.

Just as today’s commercial airliner is not normally owned by individuals, ocean liners were owned by companies and it is the communications tool these shipping companies used to advertise their services—the graphic poster—that is presented here. While regular transoceanic passenger service was first offered in the early 1800s, it is the “golden age” of ocean liners that makes up the bulk of this well-rounded book. This era, from the end of the 19th century to the early post-World War Two years, was marked by strong demand, robust competition, and ever faster and larger ships delivering greater and greater levels of comfort. And while it is the glamour aspect that both the poster artist and the well-heeled customer are drawn to, the book does not fail to touch upon the colonists and emigrants for whom the voyage was decidedly less picturesque.

As Cadringher rightly says in her Preface, the posters “recount artistic, cultural, social and industrial history” and it is with the artistic aspect that she begins the book by giving a brief history of the technology that made large-size posters possible: lithography, specifically chromolithography, more specifically the pioneering work of French artist Jules Chéret (1836–1932), “father of the modern poster.” If nothing else, this serves as an interesting example of convergence because, clearly, this new-found ability to use hand-drawn lettering and combining it with artwork immeasurably broadened the range for this form of advertising thus drawing big-name artists like Toulouse-Lautrec and Dali to the genre which in turn elevated the art form further—giving rise to L’Affichomanie, the poster craze of the 1880s and onward—with all the attending repercussions (the examination of which is outside this book’s scope) in terms of the role and impact of advertising and the public’s relationship to that which is being advertised.

As is true of this publisher’s companion book Railway Posters (ISBN-13: 978-1851496723) the text that introduces the various eras is rather short but here contains references to specific posters, and not just the ones in their respective chapters, so don’t skip this material. Cadringher, it should be explained, developed an interest in ocean liners when living in the Italian port city of Genoa and now collects and restores memorabilia—among which an extensive poster collection—and furniture from the storied ships; co-author Anne Massey is currently Professor of Design History at Kingston University and has widely published in the field of interior design (under the surname Welleans a 2006 book related to this topic but rather bland: Designing Liners, A History of Interior Design Afloat, ISBN-13: 978-0415374682).

Each chapter is introduced by 4–6 pages that give a good summary of the evolution of travel, the technology that made it possible, the economics that made it feasible, and specific ships/passages and lines. One item that a newbie reader may well have benefited from is an explanation of the differences between, say, a cruise ship or a tramp steamer and an ocean liner because its specs and construction have a direct bearing on where his type of ship can and cannot go which, at least indirectly, relates to what is shown on these posters.

In chronological order, divided principally by decade, the posters are reproduced in the main at full-page size and in very good quality on high-grade paper. Captions list some or all of the following: title or description, shipping line, artist, year, size, name of ship, printer, and source. The art history-minded reader will naturally be cognizant of the different styles throughout the decades but it is even more instructive to observe the different styles of artists working at the same time, and also to compare shipping posters to their contemporary railroad and airplane posters in terms of composition, type style, graphics, and “dynamics.” (There’s a book in this… Anyone?)

A closing section presents basic info on 58 poster designers, in some cases as little as their dates (why?? Spot-checking them revealed easy-to-find data!). No Index.

The book’s high production values—paper, printing, substantial binding, printed cover boards—are most appealing and a lot of book for the money.

First published in French in 2008.

Posted Under: Art, Artists and Design, Maritime | Author: Charly Baumann | No comments yet