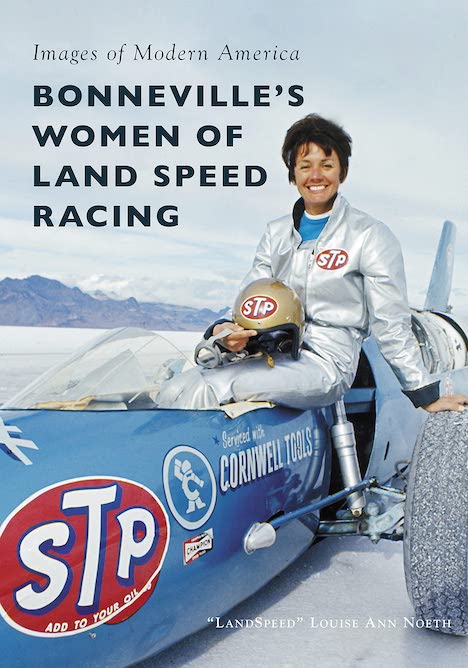 Even as author Louise Ann Noeth was putting the finishing touches on the Bonneville Salt Flats photo history we previously reviewed on this site, she had conceived of another quite different theme for another Bonneville photo history and Arcadia had enthusiastically agreed to publish. That book has now been released and brings into sharp focus Bonneville’s Women of Land Speed Racing.

The book opens with Veda Orr as, once racing resumed after World War II, she was one of the earliest ladies to take up the challenge of setting land speed records. Prior to the war she had already spent several years as a successful (read winning) drag racer. The book proceeds to document approximately 103 additional ladies from then right up to current days.

As the chapter titles convey, Noeth chose to group the women by the type of machine each raced. First is “Fast Females on Four Wheels” followed by “Lady Wranglers of Jet- and Rocket-Powered Cars”. Then comes “Women Riders” with their two wheeled rides—as in motorcycles—and lastly “Unsung Heroines” where you see and meet those volunteers who have been, and are, instrumental in making each year’s meet happen.

Author Noeth is no stranger to the salt. She’s attended annually for enough years they now amount to decades, crewed on efforts such as those spearheaded by Craig Breedlove and Steve Fossett, been a strong volunteer for the Save the Salt campaign, and driven there too in addition to writing about and photographing activities there. All of which earned her the “LandSpeed Louise” moniker.

While the book has no index, it does have a bibliography. And, it does have several appendix-like pages (they just aren’t specifically called appendices) on which are listings in alphabetical order of “Land Speed Ladies”. A reader could easily make page number notations after any or all names while going through the book and, voilá, an index. 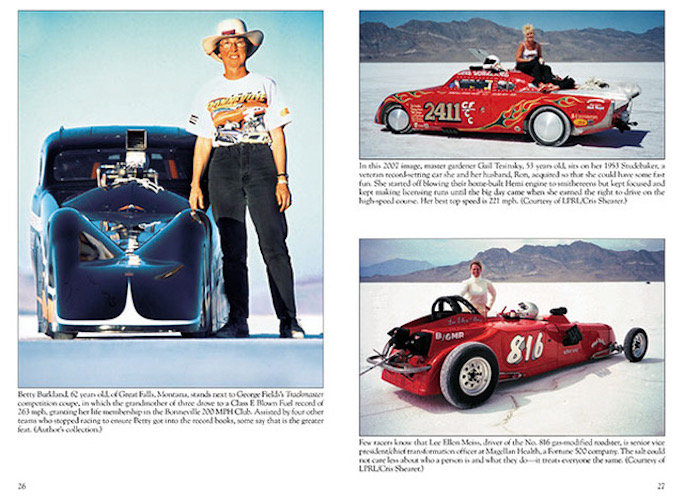 Three with very different rides and all attesting that LSR runners come from all strata and backgrounds of life. On left is Betty Burkland with her Class E  blown fuel competition coupe with which she achieved membership in the 200 MPH Club recording 263 mph. Top right is Gail Tesinsky atop her ’53 Studebaker and who, when she’s not trying to best her own 221 mph top speed, is a master gardener. And when Lee Ellen Meiss, bottom right, isn’t on the salt in her gas-modified roadster, she’s a senior vice president and chief transformation officer at Fortune 500 company Magellan Health.

As likely won’t surprise, there are a few familiar names and faces like that of the lady on the cover, Paula Murphy. Inside also is stunt-woman extraordinaire who was Lynda “Wonder Woman” Carter’s stunt double and salt racer, the late Kitty O’Neil; super pilot and racer Betty Skelton, also passed; as well as the very much alive and still racing, albeit now behind the wheel of vintage race cars, Lyn St James.

Among those who are not generally so well known are the ladies of the Klock Werks team based in Mitchell, South Dakota. It consists of mom Laura Klock, her two daughters Erika and Karlee Cobb, and friend Michelle Mielke. All ride motorcycles and all have set records on the salt. Oh, and all are “lookers”. 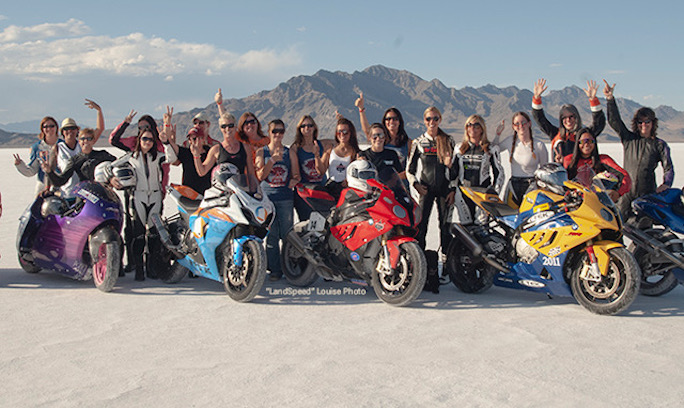 Memorable are the septuagenarians and octogenarians who are hooked on making speed on the salt. In her 70s Connie Sulu Beavers-Nicolaides rode her Suzuki Hayabusa into the record books going in excess of 200 mph. Judy Sights would knit as she worked her way forward in the staging lane in her street roadster and then it was pedal to the medal for this grandma, now in her 80s—that is she knit if she wasn’t otherwise engaged in scrutinizing the safety equipment of other entries as part of tech inspection.

And there are more—lots more—but you get the idea. This is a most enjoyable and edifying photo history book dedicated to covering and celebrating Bonneville’s Women of Land Speed Racing.

Now I Get It! Every Driver’s Handbook »
« Big Wings: The Largest Aeroplanes Ever Built