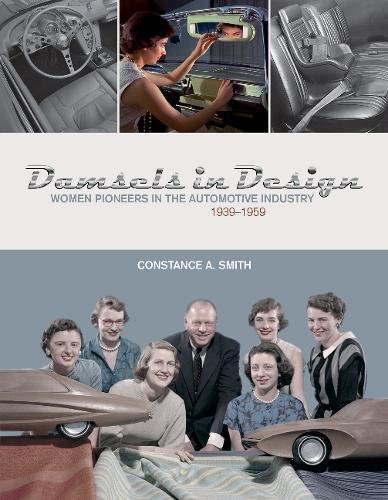 “Many of these women, missing from our history books, were the most accomplished artists of mid-century America. With an emphasis on safety, others proposed products that continue to save lives. Their design skills touched tens of millions of car owners.”

The reader is treated to the careers of twenty women in the mid-1950s who succeeded in a nearly male dominated industry where competition was fierce for everyone. You learn not only what institutions they attended but also the profiles of some of their lecturers and mentors. The Pratt Institute in Brooklyn appears to have been the primary source of these lady designers.

Author Constance Smith was one of only two women studying in the graduate Industrial Design Department at Pratt and earned a Master’s Degree in Industrial Design (MID) there in the 1970s. She was recruited into General Motors Design by Charles Jordan using a portfolio of safety models and the first idea of a heated/cooled storage or glove compartment. In GM’s Advanced Studios she was involved in state-of-the-art electronics and airbags after studying electronics at GM’s Management Training Program. Smith has also studied engine mechanics at Chrysler’s Motech and worked for automobile franchises, schools, industrial designer Charles Randolph Pollock (not to be confused with Charles Cecil P., brother of painter Jackson P.) and at present the Dealertrack Division of multi-brand conglomerate Cox Automotive. There is little doubt that this book gives us a detailed insight to the design of automobiles from an insider. 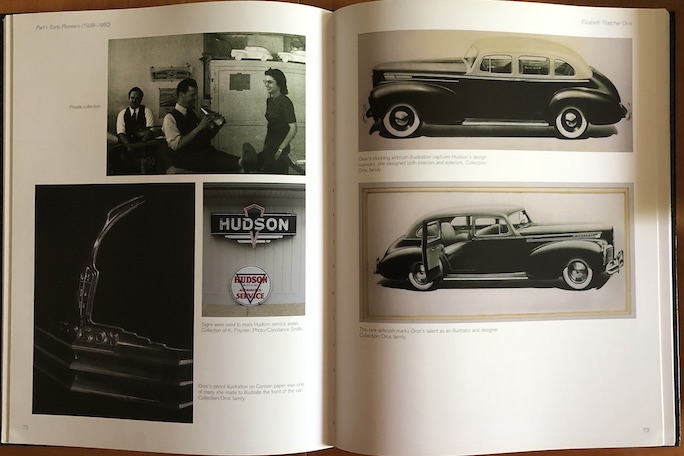 Forewords are provided by both Mary Beth Vander Schaaf, Managing Editor of Automotive News, and Elizabeth Wetzel, Director of Design, User Experience Studio, General Motors Global Design, who has been inducted into the Automotive and Michigan Women’s Hall of Fame. This is a clear indication that within the industry this book has attracted significant attention. 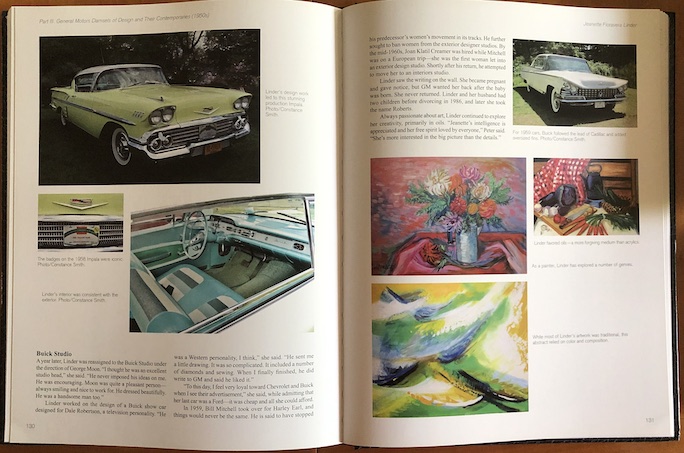 GM’s Harley Earl soon realized that women had the ideal appreciation for interior upholstery materials and designs. This respect began in 1942 with the hiring of a single mother, Helene Rother, who hailed from Europe. Contrary to what the cover may indicate Earl was not the only person hiring women; they were also found at Ford, Lincoln, Packard, and Hudson. Independent industrial designers were keen to apply women in their projects that included the automotive industry as well as other forms of designing. Studebaker’s innovative designs are an example of female input via independent industrial design houses. 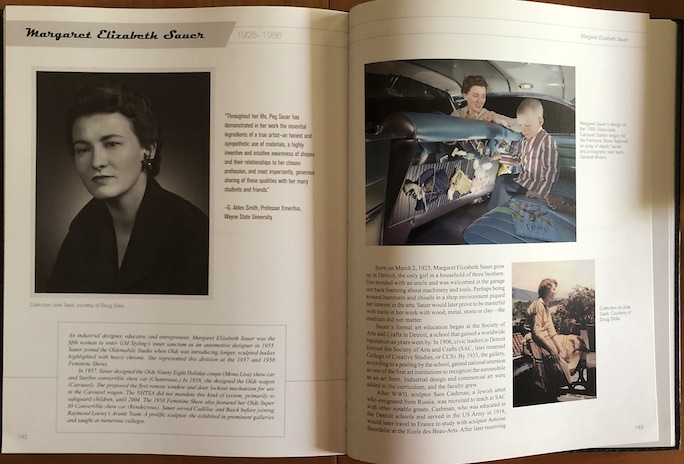 As a practitioner herself Smith may have forgotten that the jargon and terminology that have become second nature to her may may not be fully understood by all readers, but their use does give the inquiring reader insight into styling and modelling practices. Many of these women became lecturers following their automotive careers while others formed their own industrial design companies. The book includes photography of all forms of creative design—furniture, pottery, architecture—all to illustrate the varied skills. 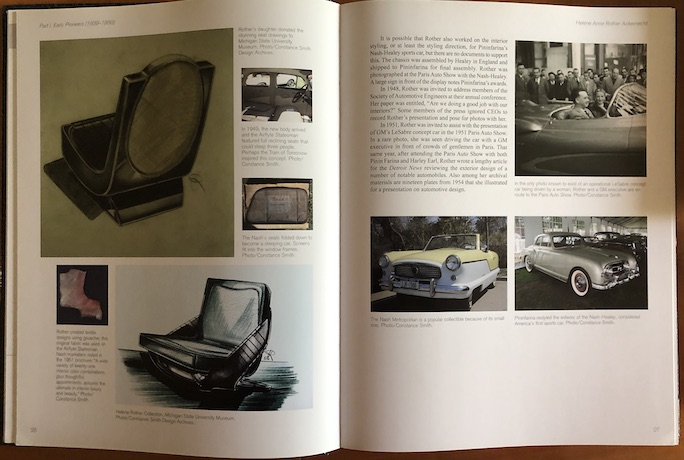 The nurturing natures of women made them ideal designers of safety applications from infant seats to air bags and dash designs with safety controls. Ruth Glennie pioneered something that still feels novel today, the Heads Up Display, and also such now ubiquitous features as seat belt retractors, and door lamps. Patents were secured for helmet designs and lumbar adjustment. 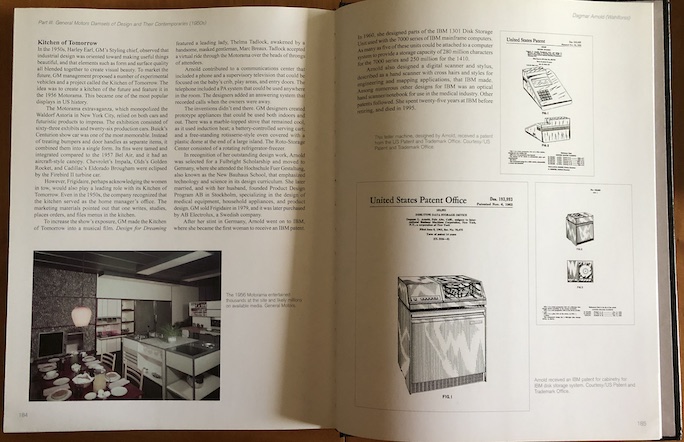 With GM’s involvement with Frigidaire, women played a major role in appliance designs. Many of the flamboyant Motorama display stands were the work of these women, as part of GM’s Product and Exhibit Design department. Their creative nature found them in many artistic endeavors, with many images recorded in this book. Most of these women participated in concept designs of one source or another. 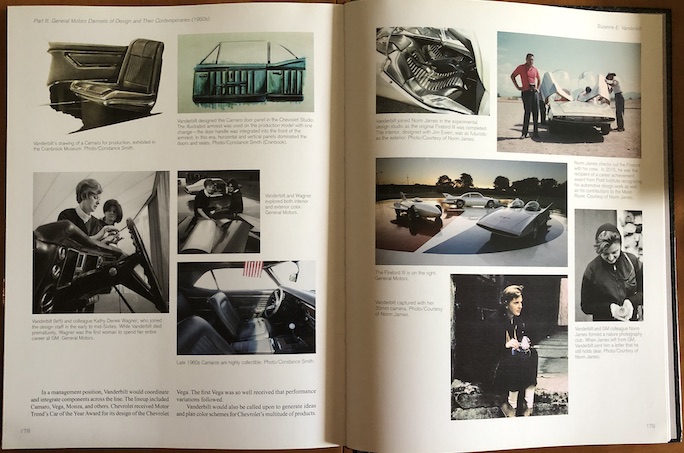 There are many books on automotive styling but none that this reviewer knows reflecting the unique roles played by women. This book also has many photographs of automotive interiors, a subject not common in the automotive literature. There are a few dating errors but in every other respect this book is unique, refreshing, and most informative. It is highly recommended.

Chapter notes, bibliography, index. There is talk of a documentary film or TV movie about this subject.

This review appears courtesy of the SAH in whose January / February 2019 Journal #296 it was first printed in substantially similar form.

Damsels in Design: Women Pioneers in the Automotive Industry, 1939–1959

by Constance A. Smith
Schiffer Publishing, 2018

Posted Under: Art, Artists and Design, Automobiles | Author: Other | No comments yet