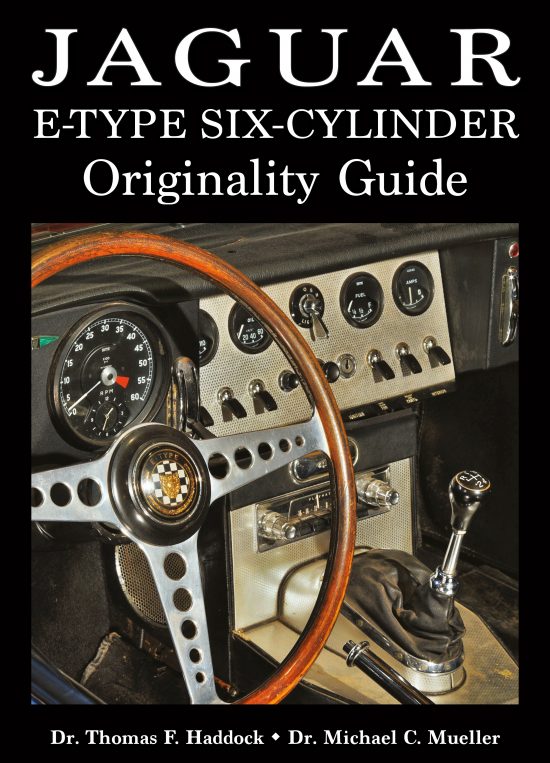 “It is true many factory records of various types are available, for example . . .. One would expect these official records could merely be transcribed to yield a listing of the detail configuration changes of the cars as production progressed. However, through decades of study it has become very apparent that many changes were not reported in the official literature well, if at all.”

Verily, verily, you cannot keep or make an E-Type original without a Haddock in the house.

If you’re in the habit of starting arguments over whether E-Types came factory-issued with, say, bumper guards you’ll want to memorize this book first (or at least p. 414. Spoiler alert: there is some evidence that some were, so proceed with caution.)

Before you make out the $125 check for this book, realize that it is not a how-to, step by step restoration manual but an originality guide. This misconception plagued Haddock’s earlier book (Motorbooks, ISBN 978-0879385163) that had basically the same title—except it included the word “Restoration,” hence the confusion. That 1991 book, long out of print, sorely missed and hard to find at anything resembling a “polite” price, is conceptually similar to the new book but pales in comparison on every count. Not least, the new book is in color which adds a really crucial dimension to the topic of originality. 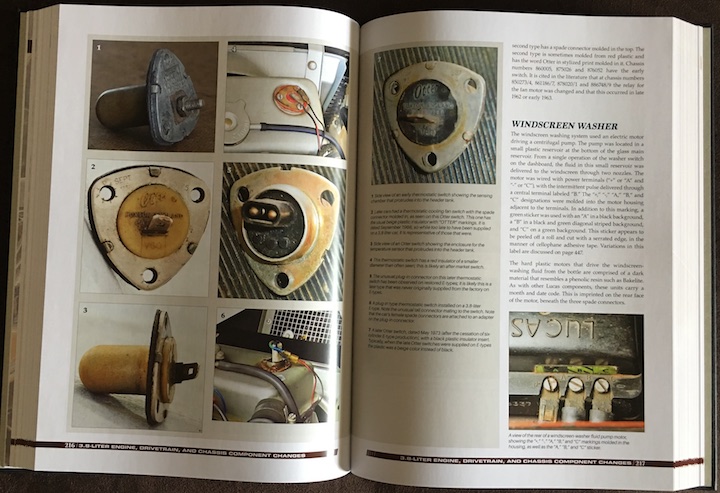 Haddock already started writing about the technical side of E-Types back when the cars were still newish and his 1976 “Notes on the First 500 E-Types” in The E-Jag News was one of the earliest methodical discussions in print (there were earlier British ones but of more limited scope). Both he and Mueller have long been and still are active on the US Jaguar club scene. Their professional backgrounds (economist, heart surgeon) have commonalities that lend themselves to writing data-intensive reference-style books. 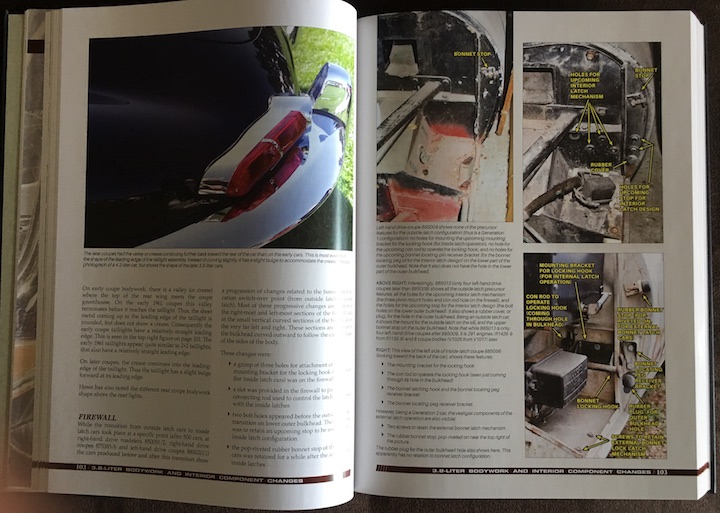 The quote at the top gives a good flavor of the way this book goes about its business. That the Foreword is by none other than mechanic/restorer/journalist par excellence Peter Egan who heaps praise upon Haddock, a fellow Wisconsinite, could end the review right here. If the book saved Egan when he cobbled together his ‘67, what better recommendation do you need? 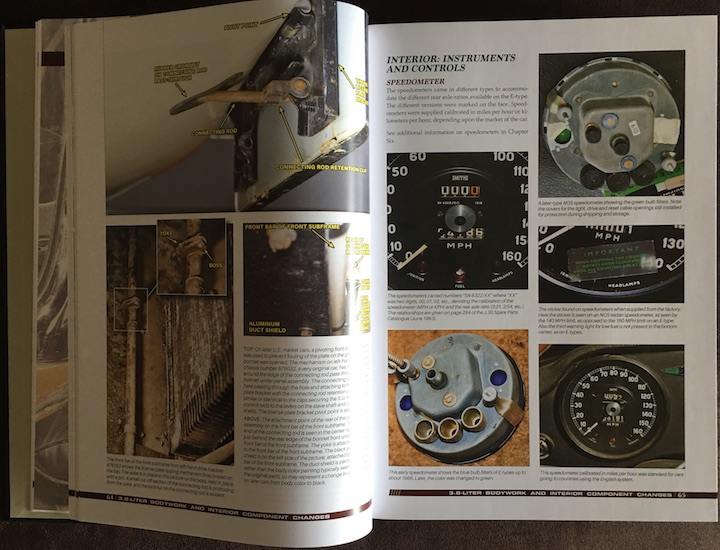 It is not meant in a derogatory way but simply to establish that this is a no-nonsense, heavy-duty book to say that the Introduction alone is enough to make one put that bottle of aspirin within arm’s reach. You really do have to stay sharp at all times, read everything and, within a section, in order. Without considering the caveats, references, nomenclature, and modus operandi the authors take pains to lay out so as to calibrate the reader’s expectations it would be easy for hasty folk to begin carping about this or that being overlooked. There is one thing that is not expressly stated: while there are text references to right hand drive cars, most of the photos show left hand versions. 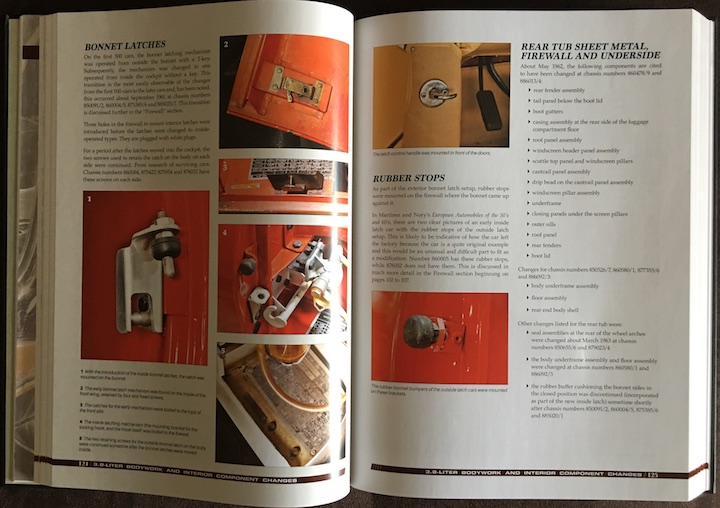 Speaking of photos (all by Haddock, collected over decades), they are not only a primary source for the statements and conclusions this book makes/draws, they are also the one thing that no other of the many, many E-Type resto books has. That’s because coauthor Mueller is a Jag parts purveyor and has dozens and dozens of unrestored E-Types and piles of parts in various stages of disassembly—the perfect proof for documenting the cars “configured as they left the factory (or dealerships).” Coupled with primary sources such as factory literature and in-period write-ups, and leavened with “carefully vetted” later/current sources including restored cars, all this lends itself to establishing a solid baseline for originality (that word itself is being put under the microscope and is used in a very specific way, excluding, for instance, NOS parts that for all practical purposes are “correct” but are not the ones a car left the factory with). 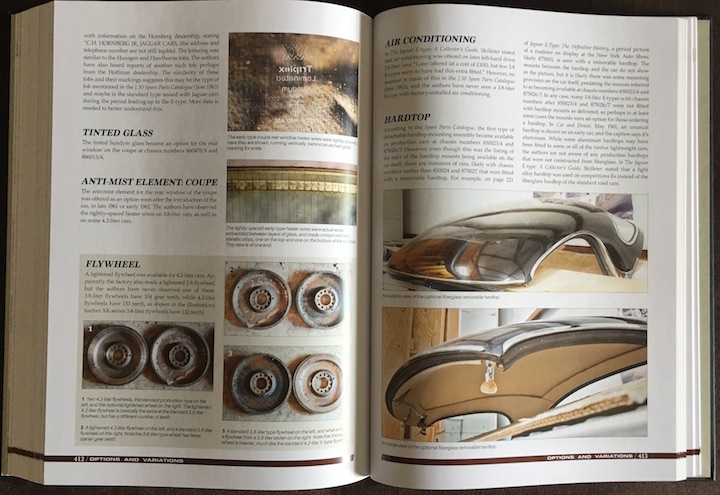 To ease the reader into the subject—easing being a relative term—the book begins with an overview of the four distinct models and their subgroups, beginning with the launch in 1961. The meat of the book are the discussions of, first, bodywork and interior features and then engine, drivetrain, and chassis components divided by model and organized by function or location rather than chassis or serial number (again, read the author’s explanations!) While it should not give anyone palpitations, realize that the authors focus on the what and not the why, meaning the “underlying engineering motivations for any change” are outside the scope of this book because much of that is covered elsewhere anyway (and the authors have no compunction about directing the reader to those sources). 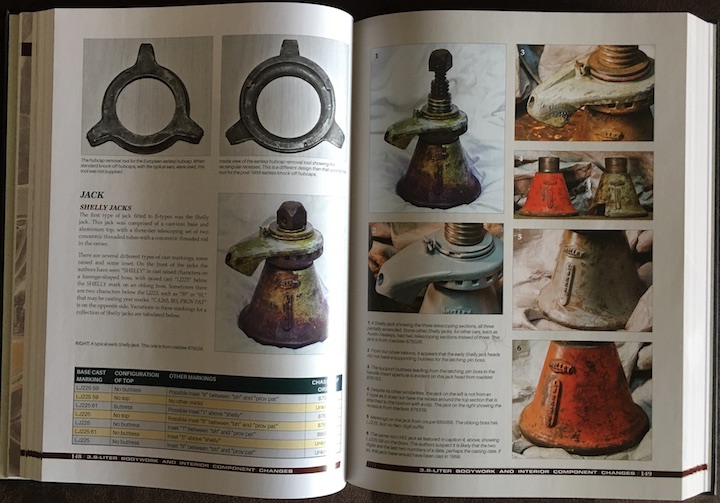 Even NOS parts and their packaging is discussed in detail, a comprehensive Bibliography is offered as well as a very good Index that even includes books by the page number on which they are mentioned here. Production changes by serial numbers are appended. 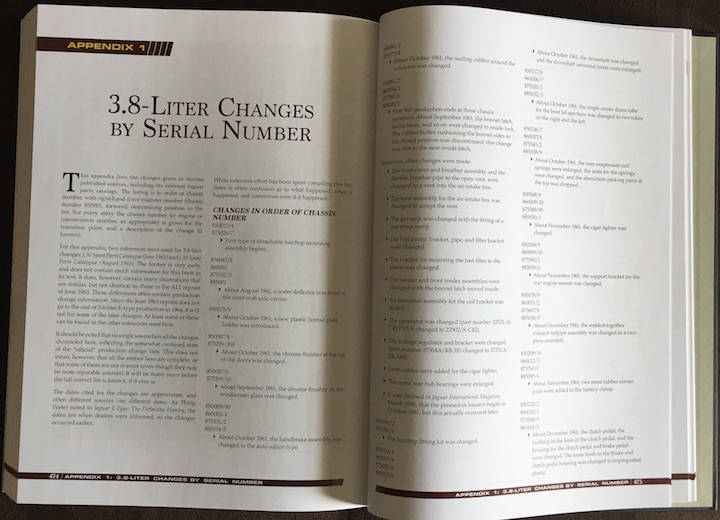 If you think of books as tools, this one is a precision tool. Use it in the manner intended and you will get the job done.