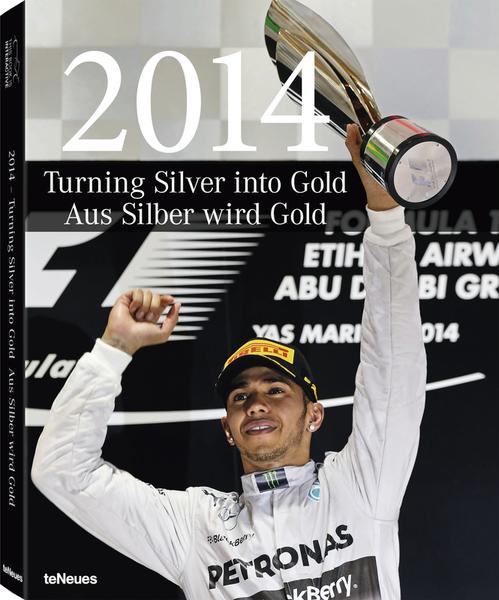 (English-German, side by side) We could have reviewed this book right after it came out but instead waited a few weeks to see if the first race of the new season would bear out the impression given by winter testing. It did: Mercedes is still the quickest, which adds quite a bit of punch to this book which celebrates Mercedes’ supremely successful 2014 season, winning both the constructors’ and the drivers’ championships—as well as Motorsport Team of the Year, Race Car of the Year, Powertrain of the Year, and Engineer of the Year. As long as the firm’s active role in motorsports is, this is actually the first-ever F1 title for the works team. 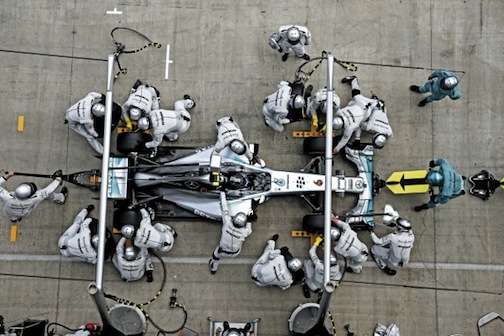 That long participation in motorsports is why Daimler Chairman Dieter Zetsche can say in his Foreword without fear of contradiction that a Mercedes presence in F1 is not a marketing gimmick but in the firm’s DNA. This book, on the other hand, toes a fine if not precarious line between marketing spin and objective reporting, not just in regard to F1 in general or this particular (and particularly boring!) 2014 season but even internal Mercedes history.

The book wasn’t just commissioned by Mercedes but Daimler AG is listed as Editor and shared copyright holder (with publisher teNeues) so it should not come as a surprise that it looks at the world through Mercedes-colored glasses. 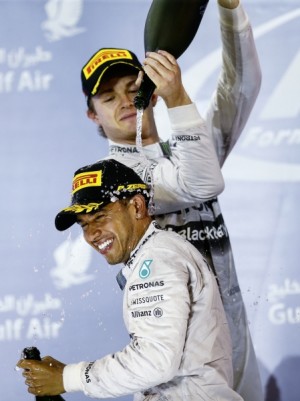 This does not have to mean that there is bias, especially with a name like Lehbrink’s as lead author but readers with a good grasp on the doings of the Mercedes AMG Petronas team on and off the track will have frequent occasion to wonder if we’re all living in the same universe. Non-Executive Chairman of the Board Niki Lauda, for instance, says in his Foreword “There is never any animosity between us . . . Lewis and Nicky are the best possible pairing from the current crop of F1 drivers.” Did Hamilton and Rosberg get that memo?? Lauda and his erstwhile arch nemesis James Hunt were never on the same team but he of all people should not be ignorant of the friction among drivers. We shall return to the question of spin later.

The above notwithstanding, this oversize, lavish book offers superlative photography, behind-the scenes material, and the sort of impressive bookmaking 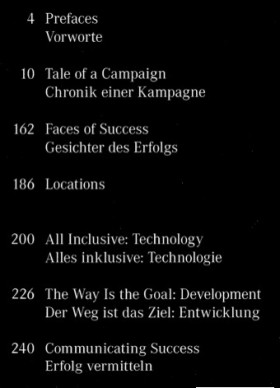 craft this publisher is known for. Each race of the season is presented with about a half a page of text and several pages of well-captured and -selected photos. This is augmented with several multi-page sidebars that take the reader to winter testing in Jerez, inside the various R+D and assembly facilities, inside the drivers’ minds before a race, and into a pre-race week of activity. Elsewhere car components, the wind tunnel, racing lubricants, and competitors’ Mercedes-powered F1 cars are examined. In-season modifications are sketched out by Giorgia Piola in the style of his excellent F1 books. A “Heritage” chapter looks at the seminal years 1914, 1934 and 1954 and takes a closer look at the W25 and W196R racecars (and revisits the question of whether the Silver Arrows were silver . . . or white or silver gray or a silvery white). This is juxtaposed with forward-looking commentary on the always-present question of whether racing does improve the breed, i.e. if and how road cars benefit from trickle-down racing technology. The basic specs of the old and the new racecars are contrasted in a table at the end. 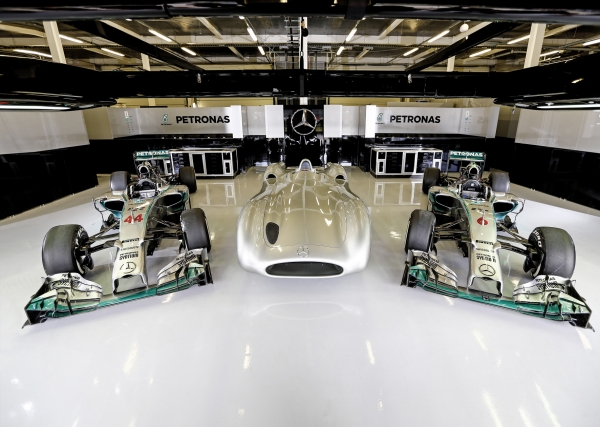 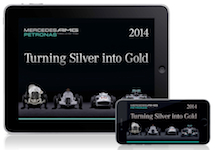 Oh, and there’s one feature that is still very much a novelty in a conventional book: it’s interactive! First, download a free app on your smartphone and then look in the book for little green racecar icons and scan them to download more photos and videos, interviews etc.

But we must return to the question of objectivity once more. The racing community is notorious for living in the present so as to be fully able to concentrate on the moment, undistracted by the noise that is the past. Surely, whoever signed the paychecks for the people working on this book had a reason to exclude any mention of two people who are no longer the flavor of the day but whose contribution to Mercedes and to racing should have spared them such ignominy: genius engineer and team boss Ross Brawn who retired at the end of the very season this book celebrates (after taking the team to 5th in 2012 and 2nd in 2013 in the constructors standings without which the 2014 wins would have been unattainable) and that Champion of Champions, Michael Schumacher who came out of retirement after earning seven world championships to “give back” to the brand that got him started. That he had no success and the car was marginal and he left the team at the end of 2012 is not a pretty story but if you never knew he existed, this book wouldn’t tell you otherwise. (To be scrupulously fair, though, each name is visible in a photo of a multiple-choice quiz for Head of M-B Motorsport Toto Wolff near the end of the book.)