The Duplicata, Catch Me If You Can 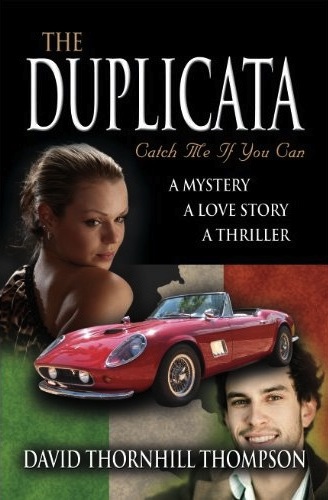 The subtitle promises “A Mystery, A Love Story, A Thriller” and the book delivers all that—with varying degrees of success.

The plot: Ned, the black sheep of a patrician family of investment bankers, an auto racer for hire, a respected contributor to the automotive press, is lured by a favorite aunt into investigating the suspicious death of his white-sheep cousin Willie who drove off a cliff in his swb Ferrari 250GT California Spyder. Various subplots spring from this.

In the real world the swb 250 is among the most expensive collector cars. (The author calls it a $15 million car but thankfully prices have not actually risen that far!) Fakes are known to exist. Now take another look at the title and you can speculate where this novel is going.

This is Thompson’s first novel but by no means his first attempt at writing. Prior to his retirement he ran an international ad agency with travel-related clients. “Painting a picture” and “making the pitch” should be second nature to someone who earned his living by creating compelling, irresistible scenarios. Add to that his automotive interests (amateur racer who “has won several championships” and “set track records at 7 major US racetracks,” safety trainer for teenage drivers etc.) and you’d think he has the winning formula for a gripping, clever novel. Other people certainly think so: “Can’t put it down.”  “Well written.”  “An exciting mystery tour.”  “Enthralling from start to finish.” 4.4 out of 5 stars so far on Amazon’s Customer Reviews. I am sorry, but I cannot agree. In fact, I struggled to finish the book—and I used to “do” literature for a living.

I like mysteries. My high water mark is Elizabeth George, and as for the others, I find them less than George to terrible. Now, Duplicata is not terrible but it has weaknesses in concept (plausibility and detail) and execution (writing style and dialogue) that only the inattentive reader would not consider problematic. Before giving examples, let me first of all say that I applaud anyone who has the drive and perseverance to give birth to any book. This is an apt picture: a book—fact or fiction—is never just a “product” but a part of the writer’s inner self, now all exposed and vulnerable. Anyone who has done it knows how difficult it is to look upon one’s own work with detachment. That’s where a good editor and copyeditor (not at all the same thing!) come in. This book, incidentally, is self-published.

So, consider some examples for yourself:

Prose. Not exactly scintillating: “It wasn’t exactly a crocodile smile, but it was full of meaning nonetheless. “  “If she was hoping not to be noticed, she must have been sorely disappointed.”  “Jennifer just giggled.”

Technique. Thompson uses the first person singular, a difficult choice in terms of writing craft, especially for someone new to fiction. An “outside” narrator can develop characters, background, motivation and plot by simply describing them but this is limiting when the speaker is the “agent”—unlike a cartoon, you can’t use thought bubbles in a novel. Also, Ned’s interior monologues are more distracting than illuminating. He is neither strong enough nor appealing enough to sustain the intense focus that this point of view generates. Ned comes off somewhere between coyly self-deprecating and unnecessarily self-congratulatory, sometimes off-putting.

No one in Ned’s position, not James Bond, not Thomas Lynley, not Matthew McConaughey, the Lincoln Lawyer, finding himself across the table from a beautiful woman, would think “Oh Pooh.”  And how convincing, really, is “Hayzoos Kreestos . . . you’ve got to get a grip on yourself.  This woman is fogging your goggles”?

Plot density. Willie’s widow not only invites Ned into the investigation, the spark of romance between her and him ignites immediately which is hardly convincing.  Unconvincing too are the supporting characters. It is as if they were drawn from the usual suspects—friends, relatives, businesswomen, lawyers, entrepreneurs—found, for example, in any of the Columbo murder cases, necessary, sometimes amusing, but never developed, never quite believable. In a 47-minute TV show, such “cardboard” archetypes are essential for achieving brevity. A full-length novel must rise above caricature. Nor is Ned fleshed out, possessing neither Lieutenant Colombo’s wit, charm, understatement, or drollery nor, say, the acerbic taciturnity and sharp intelligence of Colin Dexter’s Inspector Morse character.

Speaking of Morse, and to finally get back to cars, Morse’s trademark ride is a Jaguar Mark II, a bona-fide classic, a car guy’s car. Ned was introduced as a race driver, an automotive journalist, presumably someone who lives and breathes automobiles. Now follow Ned into his deceased cousin’s barn with state of the art climate and access controls, filled with an array of high-end collectables. Would a car guy really only notice two of the cars? “My God, he’s got a GTO!” and, “Look, there’s a Daytona Spyder!” Would you be so myopic? or such a snob?

Thompson himself plays up the car aspect as the key draw. So why doesn’t he “sell” that angle? For instance, elsewhere in the book Ned and Jennifer visit Rodney Walker Evans. Thompson gives him a back story and renders this scion of the uppermost tier of the automotive auction world with more care and believability than any of the other characters, but even here the world of buying and selling, wheeling and dealing, storing and restoring fine motorcars is given short shrift.  If Thompson wants to induce—seduce?—car buffs into reading Duplicata, why doesn’t he explore and expand such obvious automotive building blocks further?

Again, I admire Thompson’s effort, but I wish that he had worked a little harder or secured better editorial advice.  As said, Duplicata is not terrible, but if Thompson had learned more from the masters he lists in the Acknowledgements, had taken more time to realize his characters, and had been blessed with a finer literary ear, his book would have been so much the better, better for him and better for us. And better for Ned, whose future depends on whether or not this first novel is successful.

The Duplicata, Catch Me If You Can