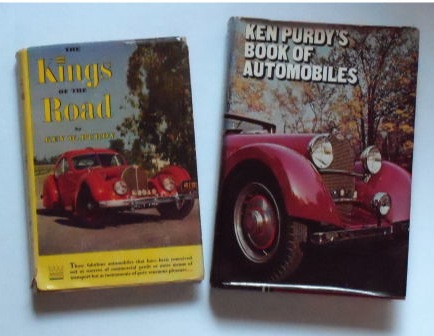 Two anthologies of automotive writings by one of the masters.

Ken Purdy was a prolific freelance writer during the 1940s-1970s. He edited magazines directed toward men including True and Argosy, writing authoritatively on many subjects, but is remembered primarily for his car related articles and short stories. It is no accident that the award For Excellence in Automotive Journalism given by the International Motor Press Association is named The Ken Purdy Award.

The Kings of the Road is a very important book in the field of automotive literature, and in my own life as a ‘car guy’. It was one of the few automobile related volumes available at the time, and my copy dates from 1952 when the red Bugatti Atlantic on the dust jacket lured me into parting with five hard earned dollars, a fortune for a ten year old boy. I’ve never regretted that purchase, and must not be alone as the book stayed in print continuously for seventeen years. This landmark volume opened the eyes of postwar Americans to the cars we now call Classics, and likely served as an inspiration to the writers whose works continue to celebrate the automobile.

In the author’s own words: “It is about cars that herald their coming for a mile and break your neck as you try to watch them pass. We will treat, in these pages, of automobiles designed to run for 20 years, and of the men who built them and drove them. We sing here of motorcars beautiful as sunsets, strong as bank vaults, desirable as dark-eyed houris never were, and safe as churches. Let us consider the fabulous Bugatti, prince of motors. Imagine a string-straight, poplar-lined Route Nationale in France on a summer’s day. That growing dot in the middle distance is a sky-blue Bugatti coupé, rasping down from Paris to Nice at 110 miles an hour….”

Purdy went on to wax eloquent about the Bugatti, the Rolls-Royce, the Duesenberg and Bentley. He wrote of his own discovery and restoration of a Mercer Raceabout, and his stories were always not so much about the machinery, but of the way the great cars made one feel when in their presence. Ken understood the need of men to race, and introduced us to the great Nuvolari, the Bentley Boys at Le Mans, and the heroic figures that competed for the Vanderbilt Cup. Purdy occasionally got his facts wrong – the Stanley steamer did not go 197 miles an hour in 1906 and, despite the name, no royal personage owned a Bugatti Royale. He also predicted that the Volkswagen “will never sell here in great quantity” and that the gas-turbine would soon replace the reciprocating engine. What he did accomplish was to introduce a generation to the excitement of automobiles whose purpose exceeded mundane transportation. I must also admit that his writing is directly responsible for my lifelong interest in Bugatti, and that I have a photograph of myself at the wheel of that very Atlantic, taken at a concours d’elegance a half century after it graced the cover of The Kings of the Road. Such is the lasting power of an influential book.

Ken Purdy’s Book of Automobiles came along in 1972, when Ken was solidly established as Playboy Magazine’s automotive editor. I can say in all honesty that I was one of many young men who subscribed to Playboy in the 1960s for Ken’s monthly contribution, the pretty girls were just a bonus. The magazine thought highly enough of his work to publish this anthology containing more than forty Purdy articles. Fewer than half originally saw print in Playboy, with the rest coming from such diverse sources as Boy’s Life,Ford Times, The Saturday Evening Post, Sports Illustrated, and The Atlantic Monthly. They range from short stories, including the classic Change of Plan, to personality pieces on Stirling Moss, Masten Gregory, Fon de Portago, Jackie Stewart, and Dan Gurney. Purdy was very good with interviews, probing his subjects for their innermost thoughts and gaining insight as to what made them so different from you and me. There are short histories of the Morgan, Frazer Nash, Porsche, Jaguar, and Ferrari, as well as brief biographies of Henry Leland (Cadillac and Lincoln), the Brothers Chevrolet, Charles Rolls and Henry Royce. Purdy wrote on many aspects of the car hobby itself, including pieces on the collecting of Classics, the craftsmen who produce scratchbuilt scale models of incredible detail, and the restorers who breathe life back into long neglected barn-finds.

Many of the pieces in this book will be familiar to long time readers, but some are from publications outside the usual, including a delightful tale fromHoliday, published in 1970 and titled “The Day They Dug Up Babs.” The last of the aero-engined monsters created by Chitty Chitty Bang Bang builder Count Louis Zborowski, this car passed to Welshman Parry Thomas on Zborowski’s death and was rechristened “Babs”, although it has never been established which lady named Barbara was the inspiration for the name. Brooklands racer Thomas took the 27 liter, Liberty engined racer to the beach at Pendine in Wales, setting an official land speed record of just over 171 miles an hour in 1926. The following year, Thomas returned to the Pendine Sands in an attempt to improve his speed. During the run, a drive chain broke and hit Thomas in the head, killing him instantly. His friends buried the car right there on the beach and it lay undisturbed for 42 years until exhumed by locals to be restored for exhibit—thus the title of the article.

Both of these volumes are common and inexpensive today, and either would be a nice introduction for a youngster keen on cars. I do wonder how the video game generation will respond to these books and hope that a reader just discovering Purdy will post a comment. Good writing always stands the test of time, but automotive technology advances may have dimmed the impact that Purdy’s articles had on those of us who discovered him in the middle of the last century.