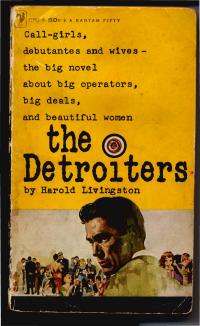 Pulp fiction. After Quentin Tarantino’s 1994 acclaimed film, it is probable that this phrase conjures images that go far beyond the scope of its original essence—who can forget the indelible images of Vincent Vega and Jules Winnfield? And although Harold Livingston’s The Detroiters has been described as pulp fiction, it really is not in the same league as the sexy crime thrillers and the heroic adventure novels of the early twentieth century—but in some ways it is close to being so. And, you might ask, what is a review of this 1958 nearly-pulp novel doing here on SpeedReaders? An honest answer is that it belongs here only peripherally, but those of us interested in the world of automobiles may want a break from more conventional automotive literature and find in this book a welcome diversion.

The book deals with the American automotive world of the mid-1950s, specifically the advertising end of it; and in so doing, we are reminded that in the mid-1950s the automotive world was predominantly American and that advertising—and all that it represents—was a predominant shaper of what a then-contemporary automobile should be: longer, lower, larger, two- or three- toned, gleamingly chromed, high-finned, dashing, svelte, powerful, romantic and ultimately desirable. In the novel, set in 1956, the featured car is the fictional Coronado.

The story revolves around one Dave Manning, an up-and-coming ad man who lands a job at Edson Smith Company, ESCO, whose chief account is The Coronado Motors Corporation—and the Coronado is “the fourth largest selling car in the country, pressing hard on Buick, pulling away fast from Plymouth.” The company is run by its president and general manager, Orrin Victor Sanders. Sanders is one to be appeased and flattered as “twenty-four million dollars of Coronado advertising” is annually placed through ESCO—1956 dollars, remember. Sanders is a strident and powerful man who is never quite pleased with ESCO’s efforts, despite the fact that he continues to keep his account there. He continually wants more oomph in the magazine ads, the TV commercials and the rest. Is Sanders a believable character? Is he representative of the true-life movers and shakers of 1956 Detroit? Probably not—but this makes for a more enjoyable reading experience.

We find too that Manning, a bachelor, becomes involved with one Jackie Fowler—and isn’t it quite a surprise when he brings her to a party at Sander’s house only to find that she has had a past? “They used to pay me . . . do you understand that?” So we have a touch of mid-1950s salaciousness. There are other sexual encounters in The Detroiters to spice it up, call girls and adultery. We also find corporate in-fighting, maneuvering, back-stabbing, betrayal and greed. We watch as Manning faces and overcomes his moral dilemma —wouldn’t it be better to leave the hypocrisy and dishonesty of ESCO and create an agency of his own, one with honesty, openness and truth? And so he does in the end. But all of this is just icing on the cake; for automotive buffs, the novel offers insight into the world of Detroit when that city was the absolute king of the automotive hill.

One example of this is the following explanation of the financial relationship among the manufactures, the dealerships, the advertising agencies and the consumer: “The dealers would pay more than eighty-five per cent of the cost. Out of ten million dollars, the dealers contributed more than eight. If the total advertising cost per unit was $40, the dealer paid almost $35. And in the end, who paid the bill? The consumer. The factory put it on the dealer’s invoice, but the dealer seldom put it on the consumer’s. It was merely an added charge absorbed by the consumer.” Or consider this reminder of what 1950s car ad artwork was like: “‘Do something about that picture,’ Vic said. ‘The Special doesn’t look long enough. . . .’ ‘We’ve stretched it out as much as possible, Vic. The wheels are almost oval now.’” There is more of this sprinkled throughout the book.

Is Livingston another Austin, Brontë or Dickens? Of course not—but I recommend the book to those interested in the automotive world. It is a fast, fun and informative read.

Note: The cover image is from the paperback edition.