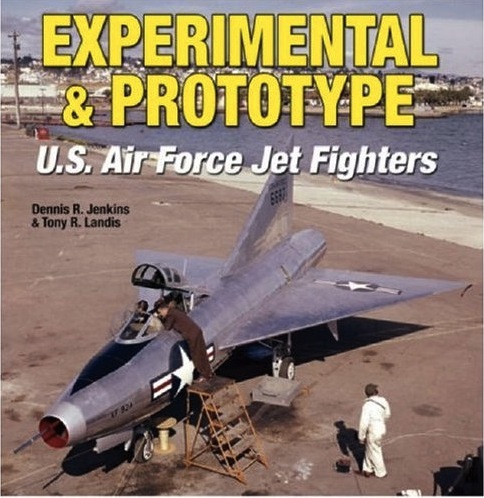 “. . . Indeed, the U.S. aircraft manufacturers fell so far behind the Europeans that no American fighter design saw combat during World War I.”

The only American aircraft in WW I that rose, as it were, to the occasion was Glenn Curtiss’ JN-4 trainer, the Jenny, and even that had European roots, its design having been commissioned by Curtiss from ex-Sopwith Aviation man Benjamin D. Thomas. And European readers, especially those who hold with Gabriel Voisin that the Wright brothers’ flyer was merely a glider that could not launch itself, will probably bristle at the sentence preceding the above quote that says: “Despite the U.S. claiming the first controlled powered flight . . .” At any rate, the US had ground to cover and this they did, comprehensively.

This book covers all those Air Force jet fighters that made it beyond the drawing board, from the Airacomet to the Joint Strike Fighter, with a pre-history of the transitional piston-engine prototypes thrown in for context along with a discussion of engine parameters and the somewhat arbitrary naming conventions and project designations.

Aviation books with the names Jenkins and/or Landis on them are usually a good bet. Most definitely so is this one—one look at the Acknowledgements and you know the company they keep—except that this book goes about what it covers and how in a way that has certain expectations of the reader. Namely that the reader can fill in gaps the authors knowingly left. The reason for this is that Jenkins and Landis initially gathered the material presented here sort of as a photo scrapbook to introduce new visuals into the record. Both have published widely, come from aerospace backgrounds, and if anyone knows what all has been written already it is them. Researching new images in turn led to the discovery of new data that then required far more narrative than originally envisioned. But rather than rehashing what is already recorded, in their own work or elsewhere, the authors here offer only that which is new or particularly important. As they write in the Preface, “This is not intended to be the ultimate or final history.” Ergo, some models the specialist reader might expect to find in a comprehensive source book are skipped altogether and some that would seem to fall outside the scope of the book are included simply because the authors found them interesting. Long story short, to get the full picture a reader would have to have a pretty good grasp of the existing literature, but note our emphasis on the word “specialist.” Anyone else will find this an all-around solid survey.

Even with the above caveats, and a host of others enumerated in the Preface, this is in fact an important book for both the student of aircraft design and the operational air force. New findings flesh out the existing record and in some cases even correct conclusions or assumptions, or remove discrepancies. The data come mostly from official, declassified Air Force records that heretofore may have been scattered across various archives. Even if this is a level of detail beyond your immediate interests, the book gives a cohesive overall account of the nature of the Air Force’s needs and how the prototypes sought to address them. Descriptions of the flight-test programs reveal what worked and what didn’t.

Divided roughly by an aircraft’s application or role, each of the book’s 12 chapters approaches its subject chronologically. The level of magnification varies considerably; see explanation above. Appended are brief company histories, Chapter Notes, and a nice Index—the latter two in tiny type. The photos are very well chosen and captioned (and each is credited), and remarkably well photographed and reproduced.