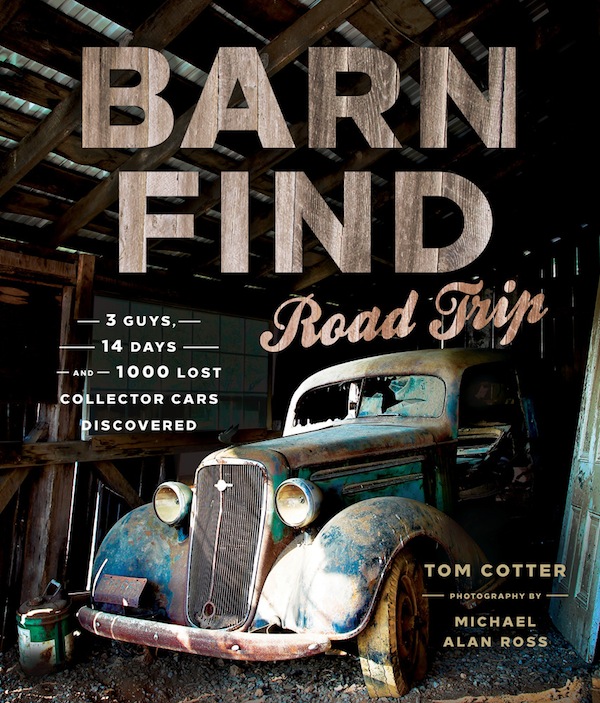 “People comment to me all the time that there are no old cars remaining; that they were all discovered 10 or 20 years ago. Baloney, I say. I can’t drive to the local pizza place without finding an interesting vehicle.”

A thousand cars in two weeks? C’mon. Actually . . . Cotter and friends came across more than 1500, even if that number includes motorcycles, trucks, and the occasional commercial vehicle. But the devil is always in the detail: half or more of that number were concentrated in three or four locations, one amounting to 350 in one spot! And the very first day, a mere 90 minutes into the trip, they espied from the freeway a Ford Farm that alone accounted for 60 cars right there.

Still, the premise is valid: cars can be found, here and there and everywhere. And Cotter has himself added half a dozen Barn Find books recording his quests to the piles of similar books that have sprouted in recent years. If you know those books, realize that this new one is different because it has a different impetus. Cotter, rightly, takes a dim view of the current proliferation of reality TV car shows that make buying, flipping, collecting, restoring look not only doable but lucrative. He points out, again rightly, that such shows are staged and scripted (“vetted by producers, weeks before the camera crews arrive”) and the outcomes massaged to be “on message.” This book, says the press release, is meant to be “the antidote.” 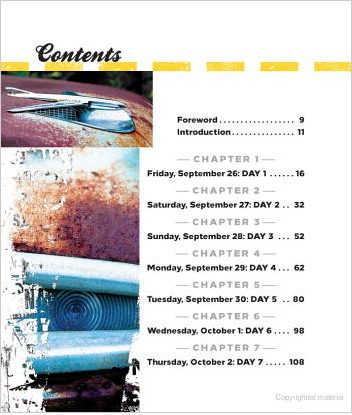 It is, certainly in spirit and in intent, but Cotter too had to resort to preplanning. He did not just throw a dart at the map and boldly went where no man had gone before. Early on in the book he credits one Zach Strait with managing the social media aspects of the trip. Innocuous enough; but if you have an attention span you will recall throughout much of 2014 on the Almighty Interweb calls for leads on squirreled-away cars that were to be sent to email addresses or hashtags that had the book title in them. (While the trip was underway there was even a hashtag #BeACotterSpotter inviting people to post pics of Cotter & Co. en route.) Later on, on p. 80, a photo caption lets on that Strait had “lined up several cars for us to see.” Nothing nefarious about that but if the point of the book is to embolden ordinary mortals to hit the pavement on their own it is disingenuous not to say that a little help from your friends is essential. But let’s not make too much of this: Cotter did have a set timeframe in which to meet the goal so every day had to yield something. “Luck favors the prepared!” . . . 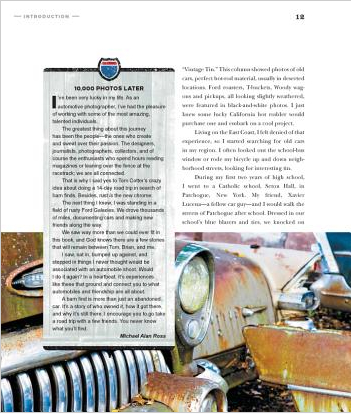 Speaking of friends, Cotter’s and photographer Ross’ names are the only ones on the cover but there’s a Third Amigo, Brian Barr, here merely identified as “a gearhead.” He is that, with years and years in various aspects of motorsports and as a concours judge and car wrangler. But he is also Owner Principal of Barr Marketing which consults on business development and strategic planning in the automotive, entertainment, and beverage industries. All three are honest to goodness car guys who bleed motor oil and have undeniable street cred. Also, the book is dedicated to Peter Egan, the patron saint of all that is good and clever and reliable in the automotive writing and wrenching realms.

To the list of stats in the subtitle should be added “2300 miles” and “4 states,” those being Virginia, West Virginia, Maryland, and Pennsylvania. Cotter purposely skipped North Carolina so as to avoid the inevitable criticism of having a home-turf advantage although several of the folks he looked up on this trip are ones whose shops, garages, or collections he already knew. Still, many if not most of the encounters seem to have been unplanned and the result of talking to the local citizenry or spotting a heap of rust on his own. And speaking of rust, many of his finds are SBDs—Seen Better Days—or tree cars (no explanation needed, right?). The whole point of this exercise was, after all, to find that which is to be found, whatever it is, simply to prove that stuff is out there.

Amelia Island Concours impresario Bill Warner says in his very nice Foreword: “Maybe this book will influence you to hit the road with the same goal. If you don’t, Tom will beat you to that lost Cobra, Ferrari, Duesenberg, or Bugatti.” He may, and he certainly has already some serious iron in his own garage, but none of the relics in this book (i.e. not considering the various very much not-for-sale cars included here, such as Lola T-70 at VIR) rise to that level. A Fiat 850 Spider is about as “exotic” as it gets and other than the occasional pedigreed race or show car or big-name hot rod most of the cars in this book are best left to continue to rot. The journey, the hunt is everything, Cotter would say, not the deal, not the buying and hording, not the restoration, not the concours circuit. Get your hands dirty, don’t be one of the “fluffers & buffers” which is Cotter-speak for the “nouveau car guys—recently retired, spare cash, who chase cars from their youth.” 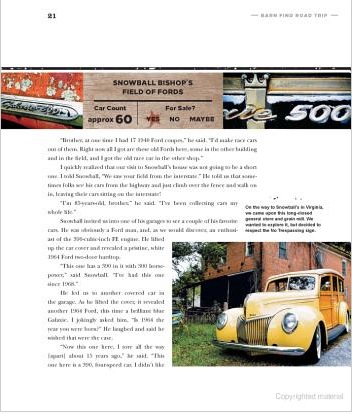 To keep things real, the book ends with a “best of” list of highlights of this trip (including a “best barmaid”!) and also the Top 10 Rules of Barn-Find Hunting which expounds the obvious (make friends with delivery people; they get to look into shops, compounds, yards) and the less obvious (make friends with lawyers; they handle estate sales) and the just-possibly-true (always search the wrong side of town). One thing was definitely a stroke of genius: Cotter traveled in his hopped-up 1939 Ford Woody (right)—a barn find, dontchaknow! It even obliged by breaking down a few times which also helps to make friends.

One look at the cover demonstrates that this book is designed with intent and with affinity for the subject matter. Just look at that wood-look lettering! This is a fun book about what was surely a fun trip. Nicely printed and bound, even an Index. The on-site photography could not have been easy but Ross has made the best of available light and space and what and how he captured it fights the book just right.