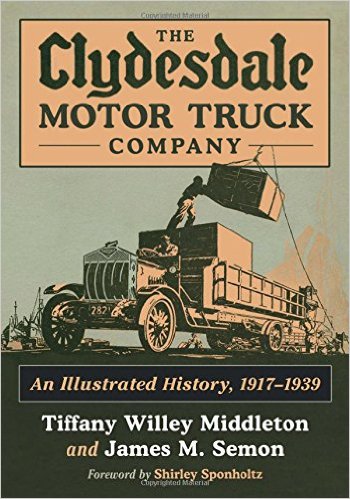 This work contains a surpassing array of detailed information related to automotive history beyond its titled subject, the Clydesdale Motor Truck Company. Even as a long-term specialist in the history of commercial motor vehicles, I was only partially aware of some of the major points covered in this history of Clydesdale truck, Clyde, Ohio.

While the Clydesdale operation existed during the 1917–1939 period, its factory had previously been the home of the Elmore bicycle and automobile, as well as Krebs motor trucks. A review of the major topics covered in this history will show how so many areas of automotive innovation have been tied to each other in one way or another.

The Elmore Manufacturing Company had switched from bicycles to gasoline cars in the early 1900s, building a successful 2-cycle automobile. This operation was taken over by Billy Durant in 1909 when forming General Motors, and then moved to Detroit in 1912. The plant manager, Louis Krebs, had left the Elmore operation after the Durant takeover and was building the Krebs commercial car in the former Elmore plant by 1913. The fascinating thing about the new Krebs was the new engine “governor.”

The Krebs were basically light-duty trucks with Renault-style sloping hoods, which were built between 1913 and 1916. Krebs advertising and sales material boasted of a unique engine governor, which was actually a device to control vehicle speed, not just the engine’s crankshaft revolutions. In advertising the Krebs was billed as, “The Car That Thinks.” The device was invented by two engineers associated with Krebs, with the patent being granted in 1914. When the new and heavier line of Clydesdale truck was developed and then introduced in 1917, the “governor,” or actually, “controller,” became the pride of the new product line. Advertising then referred to the device as “the driver under the hood.” Its basic function was to maintain the truck’s speed set by the driver, as in today’s cruise control.

The actual history of the Clydesdale truck is related in five chapters: I) Founding, 1917–1919; II) Detailed description of truck; III) Early years, 1919–1922; IV) Later life, 1922–1932; and V) Final production, 1932–1939. There are other sections, including details of the “governor” patent, model specifications, chapter reference notes, bibliography and index.

The authors obviously put a great amount of research into this history, which runs almost 300 pages. Ms. Middleton, the basic writer, is a native of Clyde and works in the legal field in Chicago. Mr. Semon, who owns a restored Clydesdale truck, is basically a rail fan, having done several books on mid-western railroads.

While there is a great deal of information about the Clydesdale truck, as well as the developmental days of motor truck use during World War I and the early 1920s, much of the text contains full quotations of product promotional descriptions. There are over 30 full-page ad reproductions covering the 1917–1920 period, many of which repeat the same selling points, such as “the driver under the hood.” There are also a great many good half-page size photos of Clydesdale trucks, including the last diesel-powered units built in the late 1930s.

As a whole, the book tends to be a nostalgic look at a product and period that might be overlooked by many automotive historians as well as local history buffs.

This review appears courtesy of the SAH in whose Journal 269 it was first printed.