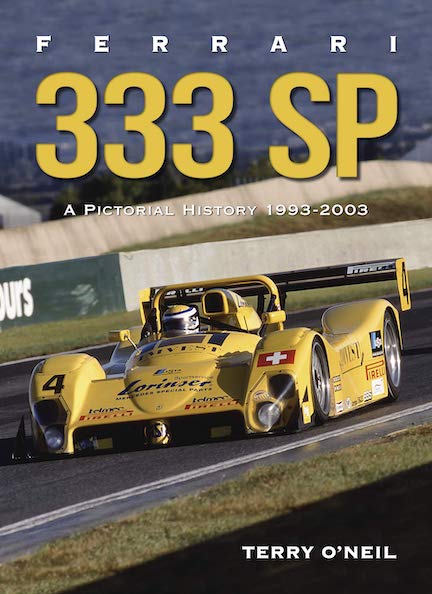 “As news of the new series seeped into the public domain the rumors started, based on remarks made to the press that a particular company was interested in running a Ferrari in 1994. That rumor alone was enough to stir the imagination of the racing fraternity.”

850 illustrations . . . and not a single decibel—what this book is missing is a soundtrack! That normally aspirated V12 in the 333 has a very distinctive bark when you stab the throttle.

For a car that did Ferrari very proud and had a really uncommonly long run, the 333 SP (for Sports Prototype) is not as widely known as it deserves, even in Ferrari circles. There are not a lot of books and certainly none that plumb the photographic depths as much as this one.

British author Terry O’Neil has made a solid name for himself as the chronicler of all manner of US sports car racing. But he is really a Ferrari man, and this latest book sort of draws on both these strengths. The 333 was specifically developed because of new IMSA rules for the 1994 WSC series. Early on O’Neil makes an interesting point, almost in passing, and the hasty reader may well miss its importance: so interested was IMSA in bringing Ferrari back after a 20-year absence that they went to Maranello for discussions while Ferrari was still uncommitted. One outcome was that IMSA agreed to modify their rules requiring the use of either 2- or 4-valve motors to make it possible for Ferrari to retain the 5-valve motors they used in the stock F50 road car. 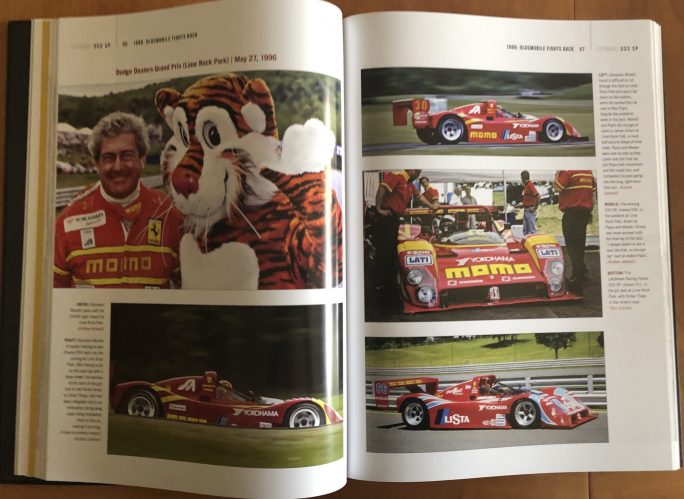 If you don’t know who the fellows top left are you’ll need to read this book just for a general motorsports education.

The rules, in fact, for the various racing series and the various years are vastly complex and the book could certainly have developed more background. For instance, summary statements such as the reasons for Ferrari, and other manufacturers, getting out of certain types of racing (too expensive) and then the solutions the organizing bodies put in place for 1994 and beyond to curb costs really don’t offer a lot meat. But, no book of this type is meant to stand entirely on its own—and there is a reason O’Neil calls his a Pictorial History. 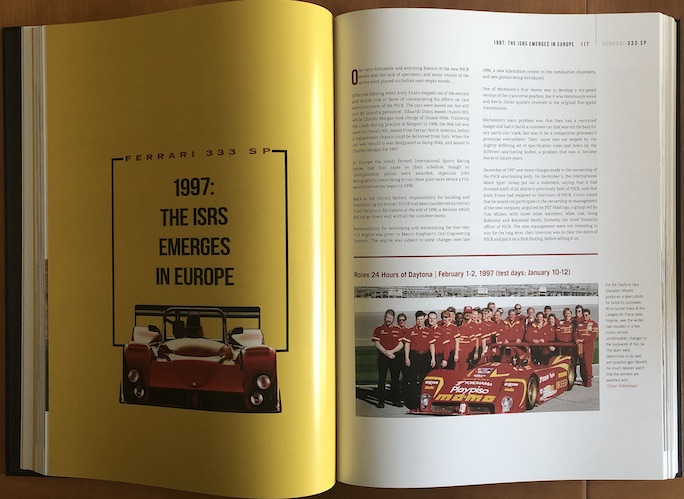 And even that could have a finer point: a pictorial history of only those cars that actually raced, meaning 27 chassis out of 40 built. Which brings us back to why the literature on this car is so thin: it is a complicated story to pin down because the 333 was from the beginning solely intended to be campaigned by customers (individuals or teams) albeit with quite comprehensive factory support. And private owners tend to come and go, or rebrand themselves or find different sponsors, all of which resulting in name changes that make the reconstruction of a car’s racing life difficult at a later time. Come to think of it, in a few cases it’s not just the car or team owner that is in question but the identity of a specific chassis. Not to worry, O’Neil is a seasoned researcher and reliable sifter of material, having cut his teeth during a professional life in sales and marketing at the Rootes Group and British Leyland each of which no stranger to convoluted history. 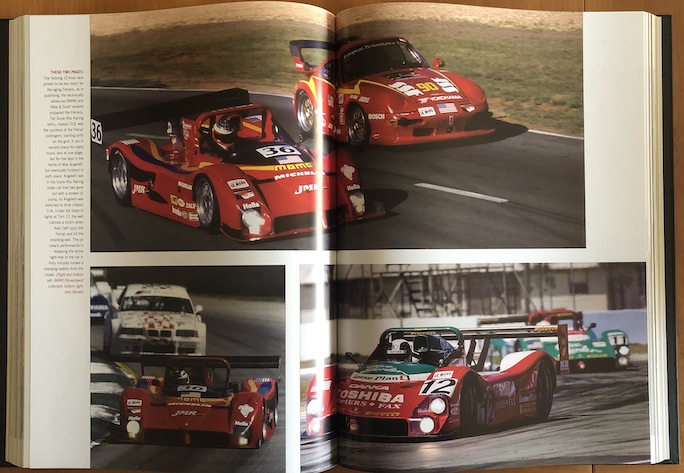 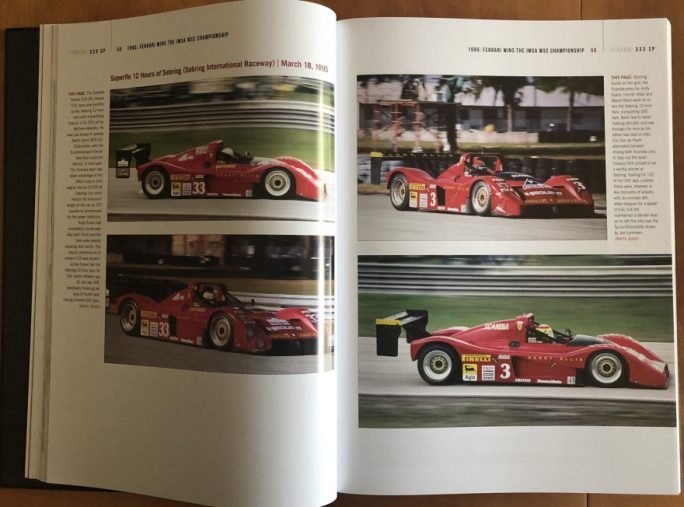 Now, realistically, some readers’ eyes may glaze over upon seeing pages and pages and pages of basically similar-looking cars—but you can’t fault the book for it! That is its core purpose and the 333 is after all the most successful Ferrari in Prototype racing.

Obviously, the very few people who own or restore a 333 today will benefit from seeing this plethora of period photos, although, those probably are the very people who supplied many of the photos in this book. (Incidentally, if you aspire to ownership of a 333, which cost ca. $900,000 including spares when new, they do come to auction, every few years. Chassis 006, which is not in this book—this is a test: why is it not? [it was not raced]—was offered in 2014 for a cool €2,800,000–3,300,000. 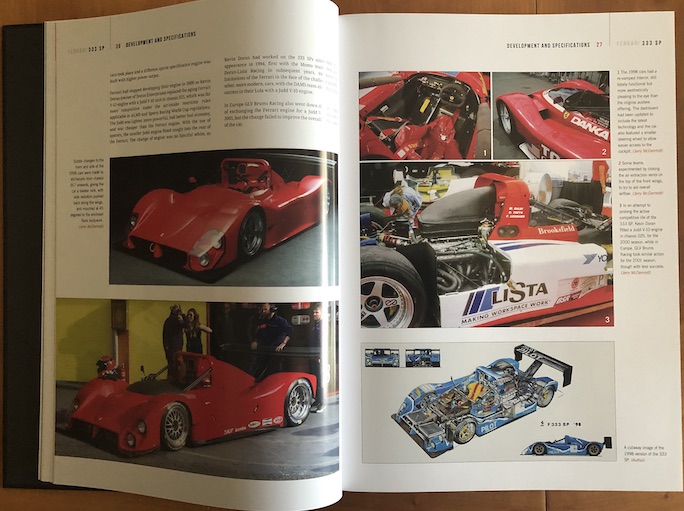 If you are not an owner or broker there’s another item you may have never clapped your eyes on: Ferrari Classiche paperwork, i.e. the Certificate of Authenticity. Not possessing one is a serious defect for a classic Ferrari. O’Neil shows a complete, almost 40-page COA (for chassis 040) so the reader can appreciate the type of detail that is required to authenticate a car.

The Index is admirably detailed, consisting of separate sections for chassis, races/circuits, teams, and proper names. One Appendix lists in tabular form race entries/results by chassis. 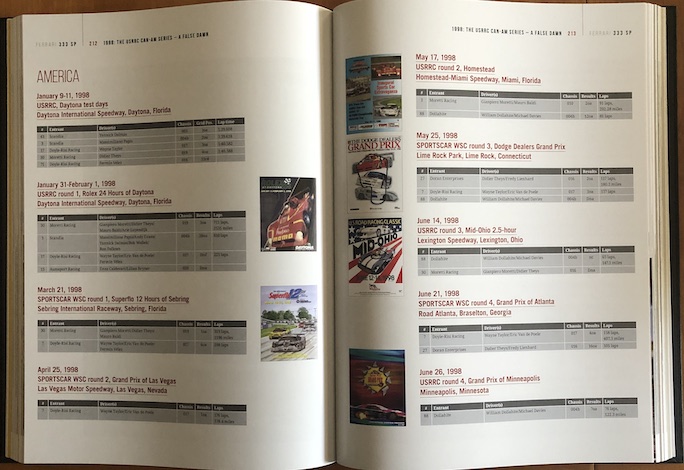 Now that O’Neil has put this stake in the ground, maybe someone else will add to the record the histories of the unraced cars, just so that we can all sleep better.