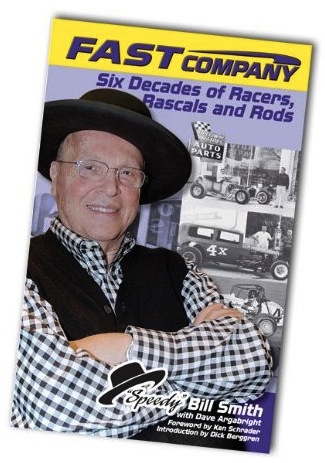 By the time you’ve walked this earth for 80 years, you’ve seen (and maybe even learned) a thing or two. And if you’re fortunate enough to still be actively engaged in your 80th-plus year at what you love doing, more power to you. Even better (for us) is if you’ve a story to tell and the ability to do that telling.

If you personally are acquainted with—or know of—D William (Speedy Bill) Smith, you also know that he and Joyce, the lady who has shared his life and work for 60 years, have a story worth telling in print. And thus you don’t need to know about the nearly-invisible intercession of Dave Argabright helping Bill tell his life story of Six Decades of Racers, Rascals and Rods in the hardbound book Fast Company. You already have the book, and have read it.

But to those who may not instantly recognize or clearly know about Speedy Bill, or of his place in the automotive firmament, read on. This review’s for you.

Request a catalog today (a decade into the 2000s) from Speedway Motors and the USPS will land one or both of the 350-plus page catalogs in your mailbox. One version is devoted to street and hot rods, the other has an even faster focus as it is all racing and oval track offerings. Oh, there’s also a smaller (not quite 200 pages) catalog dedicated to the needs of owners of sprint and midget cars.

Catalogs like these, and the business behind them, don’t bloom overnight. But twist the dial on the time machine back a few decades, key in the coordinates for middle America, and see a young man, like so many others, fascinated with cars before he is old enough to drive, much less own one. However, unlike those “so many others” young Bill Smith in a display of what would become a trait, namely his tenacity, set about learning not merely the ins and outs of a car’s workings but how to improve on it. Hot rodding it was called then. Gradually he learned and would best his buddies in street competitions, then in more formal settings (racetracks), and eventually decide that his fun was also to be his business—all without leaving his Lincoln, Nebraska hometown. He opened Speedway Motors April of 1952, all 400 square feet of it

The book, of course, relates the adventures, perils, successes and catastrophes that ensued over the following years. What’s refreshing is that the experiences are all told by Bill himself in spite of—actually because of—Dave Argabright. As is common practice for most all good biographers, Dave told me that he began “by interviewing and taping (some 35-plus hours worth, over a couple of years time), then transcribing and building the narrative. However, I don’t add words much. Bill and Joyce and I went back through the story together and Bill filled in with his own words as needed. The biggest challenge is, knowing you cannot possibly use all of the conversation, and having to winnow it down to get to a size that is feasible for publishing.”

Just as Bill’s life spans the history of hot rodding and racing from the 1940s to today, so does the book. Not only do you read about events—which cover the full spectrum—you also get a dose of Bill’s thinking and philosophy. For instance (and appropriate given the economic “events” of 2009), “Growing at a proper pace is harder than simply gaining market share. All my life I’ve (been) completely adverse to borrowing.” Speedy Bill acknowledges that he missed some opportunities because he simply didn’t have the funds and refused to incur debt—even though it likely would have paid off in the long run.

One lesson he learned early—both in real-time and as a parable too—was “You can’t put .060-over pistons in without boring the cylinders.” You may laugh at reading this today, but pause just a moment. Bill observes it is “hard to describe to somebody younger (who has) never had an engine apart…with literally not one shred of outside knowledge to help you. It seems impossible to someone today; because the world we live in (now) is information-intensive.”

Bill is still actively engaged in problem solving, clearly recognizing that the challenges have changed with the times, “Almost everything technical I was taught 60 years ago is irrelevant today. We have discovered better ways to do nearly everything, and technology has moved so quickly…and that factors into (attracting) younger people.” As Bill admonishes, “Don’t get so caught up in “the way it used to be”…change with the times.” Strong words from a man who’s seen, experienced—and accomplished—much.

Fast Company is a story worth reading, about a man worth knowing.