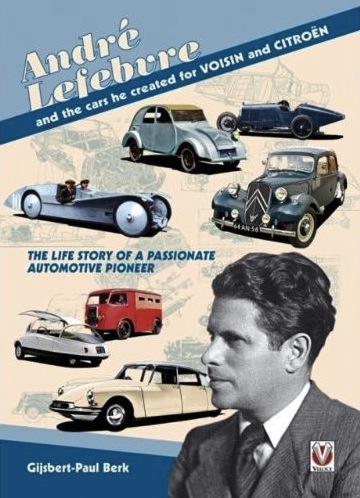 I admit to being heretofore unaware of the importance of André Lefebvre (1894–1964). There are two reasons I knew so little about this brilliant and accomplished French engineer. According to the author the first is that engineers, particularly in France, work more or less incognito. The second is that in 1958, Lefebvre suffered a stroke which prevented him from writing his memoirs. And he wasn’t one for self promotion anyway. For an American audience there is surely a third: few people today are cognizant of any type of French car let alone the people behind them.

Berk has gone to considerable lengths to bring us Lefebvre’s very interesting story. In addition to his work at Voisin, Lefebvre was in large part responsible for the Citroën Traction Avant, the H series trucks and vans, the 2CV and the DS—to have been responsible for just one of these cars would be worthy of nomination to the Engineering Hall of Fame! (Berk refrains from hero worship and gives plenty of credit and ink to the many engineers and managers who were as instrumental as Lefebvre.)

Attempting to write a biography of someone who departed our world in 1964 and left few diaries or personal notes, was not included in many contemporary articles and whose peers are also long gone, is not an easy task. But as the author points out, two books, long out of print and never translated into English, were essential for the biographer: Roger Brioult-Edifree’s 1987 two-volume history Citroën, l’histoire et les secrets de son Bureau d’Etudes which provided much needed anecdotes and insights, and Gabriel Voisin’s (Lefebvre’s first employer and who considered him his “spiritual son”) 1962 autobiography Mes mille et une voitures. In addition, Lefebvre’s sons (and daughter-in-law) all contributed stories, anecdotes, recollections and most of all the many personal photographs which serve this book so very well. Therefore Berk rarely resorts to speculation for fill-in, though it does occur at times.

Born into an upper middle class environment, young André was interested in math and mechanics, particularly if associated with those new flying machines and entered, at 17, a new college that trained aeronautic engineers. Spared by rheumatic fever and his father getting him a job with Gabriel Voisin (1880–1973) in the newfangled aero industry he avoided being drafted into the military upon outbreak of WWI. Aside from a brief and unhappy period at Renault (he and the old man did not see eye to eye, especially over front wheel drive which Renault resisted until 1961), Lefebvre would be employed by only Voisin, until 1930, and Citroën (1934–1958).

About 1/3 of the book covers the Voisin years but exactly what Lefebvre was responsible for there is not certain. By 1922 he was deeply involved in the creation of the Knight-engined (and therefore out of serious contention) C6 Course, that ugly but efficient Tours Grand Prix racecar. Lefebvre, too, entered the race and placed fifth, the only C6 to finish. It was a salient point in the young man’s career and from then on his star was ascendant. Already at Voisin Lefebvre developed an appreciation for lightweight materials and front wheel drive, factors that would influence most of his subsequent work.

A few minor criticisms: this is a slim volume, 10 x 7″ with only 144 pages, very well illustrated throughout. The font, refreshingly large, uses an italic version for the long captions and even though it is in a different color, there is often not enough visual separation. This is a design problem, not the author’s doing. A few topics did not need to constitute a separate chapter if that means a chapter is then all of one page long (c.f. Ch. 5, the Depression in France). The book is not footnoted, though references are usually clear and in the text. It does have a small Index, and the Appendices include a Bibliography.

An interesting, somewhat tragic and ironic story: First, the man who hired Lefebvre, André Citroën died of a heart attack shortly after the Traction Avant—that saved his company—was introduced. Michelin steps in, and Citroën is headed by Pierre Michelin, who got on well with Lefebvre, allowing him to fulfill the promise of the TA. In December of 1937, Michelin went off the road and was killed, driving a TA. Upon his death, Pierre Boulanger took the reins of the company, created the concept of the 2CV, and began to plan the DS along with Lefebvre. But in November of 1950, Boulanger was killed in a road accident—driving a TA. These losses, both occurring with the Lefebvre-designed car, hit the designer very hard. It was almost too much to bear. Nevertheless, even after the success of the DS, Lefebvre pursued the car that would eventually displace the now beloved 2CV. Called the “Coccinelle” (ladybug) project, the planned replacement was shaped like a teardrop, ultra light, very aerodynamic, a four-seater with plenty of room for luggage. “This concept was so advanced that it exceeded everything Lefebvre had created before,” writes Berk. For the first time the famous artist and designer Flaminio Bertoni, who had perfected the TA and DS, was not involved as it was too streamlined. Ten prototypes were said to have been built and the C10 remains. Lefebvre’s illness in 1958 effectively put an end to the project. Perhaps all for the better. Times were changing, and the management at Citroën was no longer willing to take on the huge risks associated with such an advanced car as the Coccinelle. The 2CV was eventually replaced by the much more conventional Ami 6. — Rest in Peace, André Lefebvre.

Copyright 2010, Pete Vack (speedreaders.info)
(As Publisher and Editor of VeloceToday.com, which specializes in Italian and French cars, Pete Vack provides a forum for keeping interest these cars and the people behind them alive.)

The Book of Air Shows »
« Hitler’s Motor Racing Battles: The Silver Arrows under the Swastika