A Lap of the Globe: Behind the Wheel of a Vintage Mercedes in the World’s Longest Auto Race 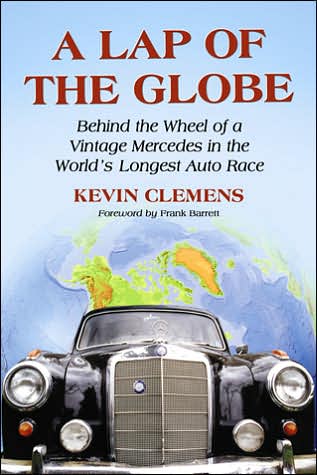 Inspired, obviously, by the Jules Verne novel of the same title, the “Around the World in 80 Days” Motor Challenge attempted—and did—just that, go around the globe. And, again as in Verne, it began and ended in London. It was, and still is, the first-ever complete around-the-world auto tour. Whereas the event took place in 2000, this book didn’t appear until six years later, possibly because it took that long to recover from 21,000 miles of hard driving.

The Lap is the brainchild of organizer Phillip Young, the man behind any number of epic modern-day endurance rallies, and is open to pre–1960 cars. Forgoing the romance of taking his 1920 Chrysler Model 70 Roadster, the author opted for a more practical 1959 Mercedes-Benz 220S sedan, bought just for this trip and well-seasoned with already 140K miles on the clock. Clemens’ combination of talents is rather unusual (journalist, mechanic, engineer, restorer, racer, publisher, and latterly holder of an LSR for electric motorcycles) and thus makes for an uncommonly well-rounded tale.

The book goes into some detail regarding the two-year-long preparation phase, selecting a car, and finding a co-driver and sponsorship (the trip would run over $100,000, with $77K just in starting fees). Each of these factors is absolutely crucial—unless you are a checkbook adventurer who has “people” to do your bidding. This sort of thing is often skipped in similar books and anyone contemplating this sort of undertaking will find the information useful.

The trip itself is described in great and entertaining detail but with only occasional reference to other competitors. Appended are routes, schedules, results. Index.

A Lap of the Globe

Posted Under: Racing, Rally | Author: Charly Baumann | No comments yet