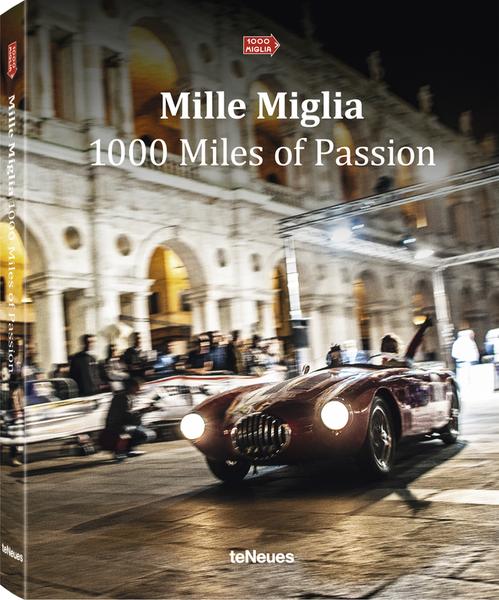 “The races that were held between 1950 and 1957 are by far the best known—due in large part to the media coverage. In those eight years, the most famous inter-
national champions lined up to compete at the start on the Viale Venezia, and the race cars, which sped off under the checkered flag of Renzo Castagneto, were extremely sophis-
ticated models. In those years, the Mille Miglia played a significant role in restoring the road network in Italy and in advancing technical progress. . . .

At the time, Enzo Ferrari described the race as ‘the most beautiful car race in the world.’”

(English, German, Italian) It is certainly true that media coverage in the general press gave the Mille visibility and, importantly, was itself visible without any effort on the part of the enthusiast. Pick up your village newspaper, and there it was. Not so much today where the very overabundance of coverage leads to ever more compartmentalization. A book like this goes a long way towards attracting eyeballs—or could go, if it weren’t, and we mean this in the most neutral way, such a mixed bag.

When all is said and done, this is a very nice book! But it takes some parsing to arrive at that impression. The book looks at the 2014 Mille (some 50 pages at the end address past events), mainly in the form of photos, primarily by the renowned René Staud team. Cars and people in motion. Blurred photos. Divided into four days. Angles and perspectives and compositions that convey a palpable “you are here” quality—the sort of thing that less imaginative folk might consider outtakes. The sparse text often has a reportage-like feel. If you have a spark of imagination, the book will draw you in. 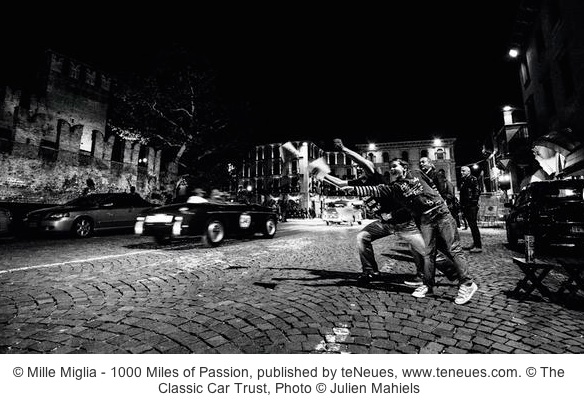 As always it helps to understand who’s behind a project, especially in this case where there is no author of record but several people are credited for what little text it contains. The Classic Car Trust (of Liechtenstein and Switzerland) is listed on the Impressum as “editor” but Trust chairman Fritz Kaiser in one of the Forewords refers to his organization as the publisher. For our purposes this distinction is immaterial because what matters is that the Trust is a lead sponsor 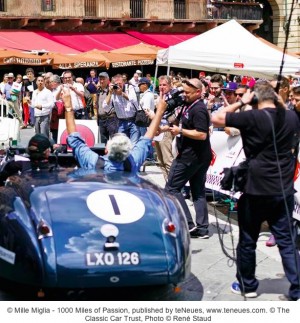 of the Mille and fields several cars, usually driven by assorted celebrities. Both feature prominently in this book but, except Kaiser’s Cisitalia 202, the cars are not identified thusly and only people with a decent attention span might notice that the same handful of cars are shown an awful lot. And that is its Achilles heel; Kaiser writes “as the publisher of this book, we want to draw on the perspective of leading photographers to show you how more than 400 teams master these very special 1,000 miles . . .” but all the book does is give a selective sampling. Very pretty, but far from a full picture.

Even the text is not overly concerned with broader context. If the point of the book is to get people interested in the Mille, why only say, “At 6 p.m. on Thursday, May 15, the first car—an OM as tradition dictates—crosses the starting line” without explaining why the start always (except the first running) is at night or why an OM has to be first? Both of these stories would illustrate the anachronisms that can both distinguish and hobble reenactments such as this. The Mille, in fact, is the only event in which the number of reenactments is larger than that of original events (disregarding, for brevity’s sake, the difference between “speed” and “rally” editions). 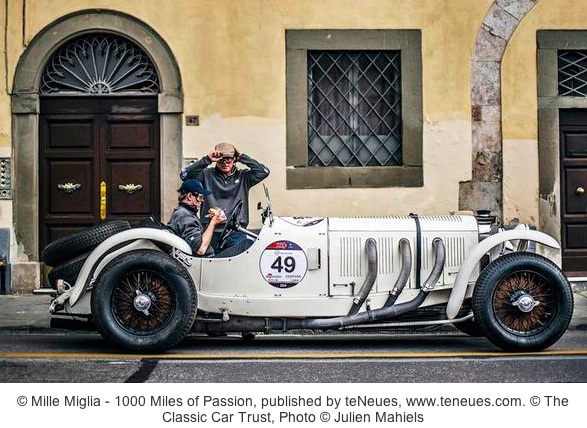 As there are not a lot of words there are hardly any mistakes but one deserves to be made fun of: a photo caption (p. 84) of a 1952 Mercedes 300 SL points out “a breaking spoiler on the roof” when an air brake is meant, a radical piece of kit that was tested for the first time on that car. Hardcore car folk will not only lament such lack of detail, as stat chasers will grumble that there is no list of all contenders, but may decide they have no practical use for this book. 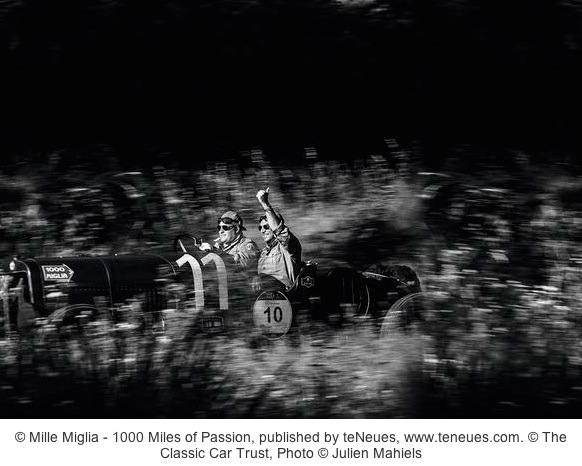 The 50-odd pages in the “History” chapter are, however, quite refreshing. (Here, too, [p. 234] the aforementioned OM theme is at last picked up again but still doesn’t say that their 1, 2, 3 sweep in 1927 is the reason for being given pride of place on subsequent starting grids. That’s what happens when then there is no real editor to cobble together all the separate writers’ pieces!) Key people and events are portrayed in brief, a nod is given to female drivers, and portraits of 1927–57 winners and rally routes are shown. The period illustrations are as lovely and plentiful as elsewhere in the book.

The book closes with a commentary on the modern Mille. If readers only knew that it costs less than $10,000 to start—which includes two Chopard wristwatches, four hotel nights, assorted meals, and buckets of swag—more might turn from armchair rallyists into actual ones. But, as it is, way more people register than will be invited anyway.

Under the Spotlight »
« Lime Rock Park