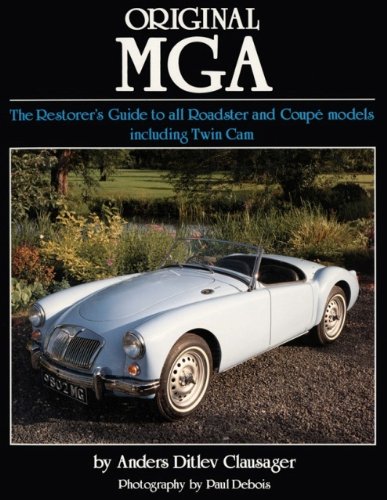 The 1955–62 MGA is not at all an uncommon sight on today’s roads. Strong mechanicals, easy parts availability, decent top speed, and good looks account for this model’s desirability. Add to that healthy auction prices and you have a car you’ll want to keep at or restore to the top of its game.

If you don’t already know this Original series of books, realize that the words “Restorer’s Guide” do not imply the sort of how-to technical/mechanical manual or repair guide you’d be looking for when you are actually bolting a car together. Rather, this is a visual primer, a lexicon of correct original parts and finishes.

Based on factory records, original parts catalogs, and the input from restorers and owners all over the world (in this book mainly UK, USA, and Denmark) the author describes in words and pictures what the car would have looked like when it was originally built.

Clausager is singularly well equipped to know just what that baseline should be because as archivist (1979–2000) of the British Motor Industry Heritage Trust (BMIHT) he had access to the original records. With dry humor he observes, “it is my privilege to act as custodian of more records than any sensible person would ever wish to accumulate.” Also, Clausager has been enamored with the model since seeing his first one at the impressionable age of six. It is also worth noting that this book is already in its fifth edition since its 1993 first printing. This, if nothing else should instill a measure of confidence—books that are fluff and are rejected by the very people it is written for simply don’t get reprinted. Given what this book does and how it goes about it, it is not likely that the coffee table book-crowd are the primary users. Mind you, it’s pretty enough to just be laying around and entertaining enough to just be randomly picked up but the primary user is without doubt the owner, restorer—and the concours judge!—who have a need to know.

In addition to the base models the book also covers the rarer Twin Cam and the De Luxe (a moniker the factory did not use) versions, the latter referring to all pushrod-engined cars with four-wheel disks and center-lock disc wheels. Of particular interest to the general viewer will be multiple photos of a sectioned Twin Cam chassis belonging to the BMIHT (possibly the 1958 Earls Court motor show car) which shows bits you don’t normally see. Ironically, the BMIHT chassis is a textbook example of what all can be “wrong” with a car because it features non-standard finishes (not least a lime-green exhaust pipe). There is also another 1500 Twin Cam chassis shown, this one at different stages of assembly.

The photos go hand in hand with the text and were principally taken by Paul Debois who has done the photos for several books in this series. They are augmented by several other contributions. By showing cars in as near-original condition as can be found they provide irrefutable evidence of “factory original.” All of this is of course only relevant to the owner or restorer who wants to return their car to original condition and does not address the issue of the merits of newer/better parts or techniques having come along since. It is also enlightening that the photos cover the whole spectrum, from fairly pristine one-owner car to one mainly held together by rust.

A few pages at the beginning relate the basic history of genesis, development and variants and a few pages at the end contain a quite detailed buying guide. In between, the bulk of the book is devoted to individual components and assemblies, trim, options, accessories, identification, and dating. Comprehensive production numbers as well as paint schemes and color code reference table are also provided.

This was Clausager’s third book in the Original series and was followed by a similar tome about the successor model, the MGB. If you have any of the models covered by this series of books, consider yourself lucky that the various authors have gone to such trouble to distill a common denominator.

The Art of the Racing Motorcycle: 100 Years of Designing for Speed »
« Salmson, la belle mécanique française