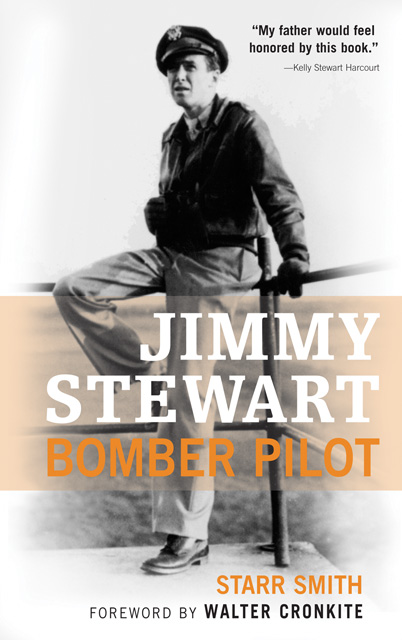 Although he failed his initial induction physical due to being underweight, Hollywood actor James Maitland “Jimmy” Stewart managed to (barely) pass a follow-up physical and was then inducted into the United States Army in March 1941—not long after being presented with the Academy Award for Best Actor for his role in The Philadelphia Story. Private Stewart was assigned to the Army Air Corps. Although technically too old to be an Aviation Cadet, Sergeant Stewart managed to wrangle flight training—being a licensed pilot holding a commercial pilot’s license made this easier than otherwise might have been possible—and was then commissioned a year after his induction as a Second Lieutenant.

A number of Hollywood and sports celebrities entered the service during World War II but few served on the front lines and saw action, most spending their time with activities focused on building morale, participating in USO shows and tours entertaining troops, or making training films. While the value of this sort of role is often dismissed, one need only think of the important role Bob Hope and many others played in boosting the morale of the troops. That, however, was not what Stewart (1908–1997), whose father and grandfathers had served in their day, had in mind for his time in uniform.

Although not quite outright hagiography, neither is Smith’s book quite the biography that it might have been. That Jimmy Stewart rose from being a Private in March 1941 to Second Lieutenant a year later and then to Colonel in March 1945 is a rapid jump through the ranks, even for the Army Air Force during WWII. That Stewart managed to achieve this on his own merit makes his story even more fascinating and intriguing.

To give Smith credit where credit is due, he does provide a good introduction to the wartime service of Stewart. While never quite using his Hollywood fame to gain assignments—if anything, it was usually an impediment—Stewart was fortunate to encounter several commanders along the way who saw the potential in him and allowed him to achieve what he wanted: active-duty wartime service as a bomber pilot.

Initially assigned to fly the B-17, Stewart managed to escape the possible fate of being an instructor pilot serving the duration of the war stateside. Assigned to a B-24 unit heading for Europe and assignment to the Eighth Air Force, Stewart would soon find himself in his element. As someone who served with Stewart, Smith does fill in some of the gaps of Stewart’s time with the Eighth Air Force. He also provides a perspective of those who actually served with Stewart, which helps explain some of both the mystique and the qualities that made Stewart an effective and decorated (Distinguished Flying Cross with Oak Leaf Cluster, among others) combat leader.

While not necessarily the in-depth book we might be wishing for regarding Jimmy Stewart’s military service, the book is still worth taking the time to read. If nothing else, it will deepen one’s appreciation for Stewart the citizen-soldier. That Stewart remained in the service after the war (against the movie studios’ wishes), eventually retiring as a Brigadier General in the Air Force Reserve, was very unusual at the time and probably unimaginable today.

Something that had not registered with me until I read the book was that unlike many other Hollywood stars who served during WWII, Jimmy Stewart never made a (commercial) movie set during that, or any, war. That is in itself an interesting insight into Jimmy Stewart, who as a bomber pilot with 20 combat missions had no need for the celluloid war.

Check out Stewart’s piloting skills for yourself in Strategic Air Command (1955), The Spirit of St. Louis (1957), and 1965’s The Flight of the Phoenix (in which his stunt double was killed flying the one-off plane).

Also available in a 2006 softcover edition