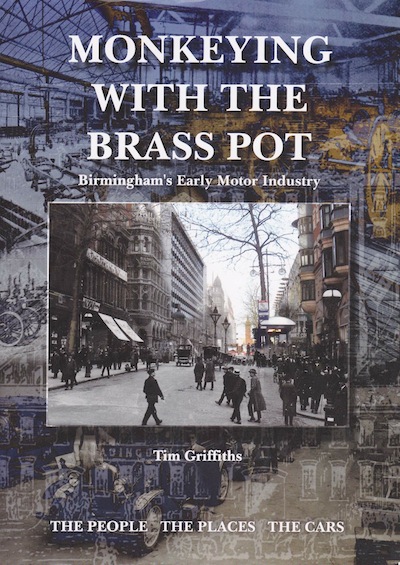 Firstly I must explain the slightly obscure title. “Monkeying with the brass pot” was an expression used in the early days of motoring to describe tinkering with the engine. This book is a most interesting account of over 100 manufacturers of cars made in Birmingham from the earliest days (1894) till 1939.

There is a very good Introduction to the subject.  The book is divided into chapters such as Veteran, Edwardian etc. with each make being in date order within the chapter. As a lover of cyclecars I note that pre 1915 cyclecars take up no less than 50 pages—so popular was this slightly zany form of transport.

Each entry relates to a firm that made at least one vehicle and had the intention of going into production. The text is very interesting and informative and is accompanied by many period photographs, most of which are reproduced well. There is often a picture of the premises and nearly always a print from a period map showing where the firm was located.

Like Coventry, many of the companies making the earlier cars came from the bicycle industry. There are some lovely touches; take the Richmond built in 1901. Henry Richmond made this prototype at home—and it became redundant just before it was finished. The next week he lost a finger when running the engine. The Autocar magazine picked up this story and a man in Bradford was so touched by this and other domestic woes that he sent £6 to finish the car; Autocar donated half a Guinea. Sadly, even with injection of capital, it did not go into production

Some makes were new to this reviewer, such as the V.A.L., Dallison, Hail, JAR, and Wrigley. The last company to start up and build cars before WW II was Atco with its Trainer, at least one of which was taxed for the road. Coachbuilders and the component industries are touched on. There is a very useful Bibliography and Index.

This book will certainly stay on my bookshelf for future reference.