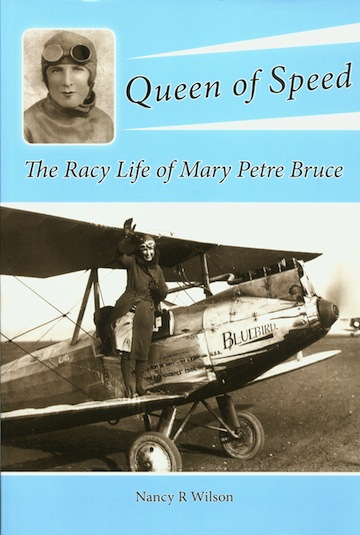 I’ll come right out with it: I couldn’t put it down! I can’t recall a racier or more absorbing read. Hers was a life lived to the full, and more, and for jaw-dropping derring-do it’s hard to beat. Californian author Nancy Wilson stumbled upon the Hon. Mrs. Victor Bruce (1895–1990) in the obituary column of her newspaper. Amazed by such a colorful life, Wilson set upon finding out more about Bruce’s exploits. Countless research trips to England and 20 years later, here is her book. It should be noted that Wilson was an ER nurse for many years and only late in life picked up a degree (with honors) in English. For a first book this is a most polished effort and validates her literary inclinations.

On her trips to England Wilson came into contact with the family who since 1985 own Bruce’s former home, “Priory Steps” in Bradford on Avon, which is a B&B today. The proprietor had come across material Bruce had left there and took it upon himself to preserve it and collect more. Many other sources, including Bruce’s children, made themselves available to Wilson and thanks to that, this remarkable woman can again be admired, undoing the obscurity that befell her some years after her many motoring and aerial triumphs.

Mildred Mary Petre showed interest in speed from her childhood years and her racy life never slowed down after that. This included an illegitimate child in 1920 with Stephen Easter, a wealthy landowner who enabled her to live comfortably for many years. In 1926 she married the aristocratic Victor Bruce (1897–1978), a competition driver for motoring pioneer S.F. Edge and his A.C. car company. He had come 4th in the 1925 Monte Carlo Rally and in 1926 won it, a British first. In 1927 Mrs. Bruce was loaned an A.C. saloon, and with three passengers (Victor included) she drove the entire 1927 Monte herself, through many hardships, and arrived at the end exactly on time and was the first woman finisher. She was awarded the Coupe des Dames and came 6th overall. In 1928 she came 4th.

At the end of the 1927 Monte she drove the A.C. with passengers in a dash through Italy, North Africa, and Spain to Montlhéry in France for a final 1,000 mile track circuit over three days. The whole affair was the wildest drive imaginable and became the story for her book Nine Thousand Miles in Eight Weeks. That July she headed north for an Arctic run (Robert W. Beare’s To the Arctic by Motor Car covered the tale) during which the King of Denmark sought her out to honor her achievement. In December that same year and with Victor as co-driver it was a 10-day trial at Montlhéry, breaking the 10,000 mile record and achieving 15,000 miles at an average speed of 68 mph. Her celebrity status in England was by now legendary. But for Mrs. Bruce it was time for a change.

She took up speedboats and gained the Channel crossing record. Journalism aimed at women also took up her time. In 1928 she drove the entire Coupe des Alpes in the old A.C. saloon but a collision disqualified them from a prize. Sponsorship, endorsements, and the journalism were all making the Bruces ever wealthier, able to take on new challenges. The next one was driving the 1929 Monte in an Arrol-Aster but it ended in disaster as the car had electrical problems. Even so, their triumph was in coping with the conditions at all, and this book time again spells out what Mrs, Bruce had to endure, sometimes not for the squeamish. June 1929 saw a return to form when Mrs. Bruce drove Birkin’s 4½L Le Mans Bentley KM3077, loaned by Bentley Motors, to set a new single-handed 24 hour record at Montlhéry. She found handling this behemoth a change from the A.C.! 2,149.86 miles later, at an average 89.57 mph, with a new honorary life membership of the British Racing Drivers’ Club, she was the first woman to achieve either.

Her 24-hour record on water which followed, and a new Channel record as well, came at a time when British prestige in speed events was at its height. Rolls-Royce at one point held the air, land, and water records with the use of their engines. Mrs. Bruce’s exploits added to the public’s acclaim. And next it was the air. In 1930 she discovered a Blackburn Bluebird for sale in a London department store (!), learned to fly within two weeks, and then set about preparing it for a round the world solo flight (except for sea passage on the oceans). Words fail the reviewer . . . I’d urge you to read the book for this incredible exploit alone! The U.S. crossing was particularly demanding.

She was now the first woman to have flown solo around the world but public reaction was muted (the papers unkindly called her “the flying housewife”). The new economic situation the world faced limited her opportunities to exploit her achievement. In 1932 Mrs. Bruce turned to exploits in the new mid-air refuelling technique, to support 24-hour flying, but this was only partially successful. Running a commercial airline followed for many years, and some quirky car records as well.

By the mid 1930s she had parted company from Victor and became close to her airline business partner Eric Noddings and together they ran the airline and air pageants. Still using the name Bruce, she bought her new man an almost new Rolls-Royce Phantom III, the glamorous 1938 Hooper sedanca de ville 3CP200. She kept it after his death and in old age even did a speed run in it at Thruxton circuit. During the war she invested in more Rolls-Royces as a hedge after the peace but Eric’s death soon afterwards in 1941 was a heavy blow. Her active years from the end of the war included running a glove factory, backing a bus coachbuilding concern, running a magnificent boat, collecting antiques, and property development. She also found time to publish her memoirs Nine Lives Plus. You can say that again. To promote it, aged 81, she strapped on an aircraft again and looped the loop!

As the author says at the end of the book, “How I wish I had known her!” Who could disagree?

Just reading the book is exhausting—imagine doing all these things! Readers of a certain age may recall that in the 1930s it was Ovaltine advertisements that kept readers abreast of her exploits, with Bruce proclaiming “If it had not been for Ovaltine in the flask I should have never been able to keep my strength and nerves together!” So, that’s the key to success . . . every generation has its pick-me-ups!