Quest for Speed: The Epic Saga of Record-Breaking on Land 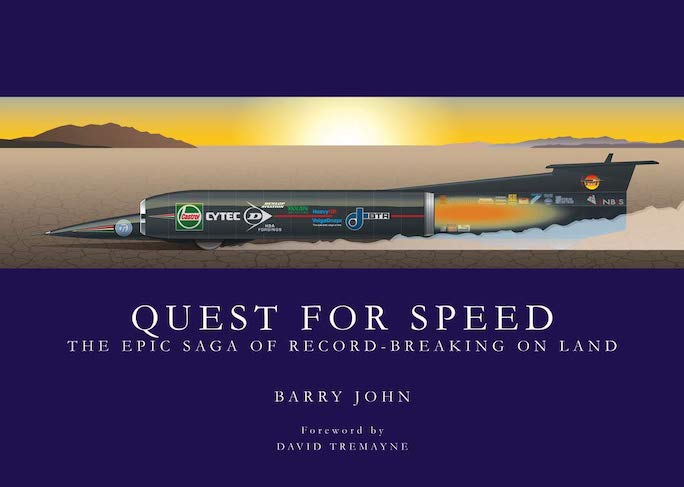 David Tremayne, a noted writer with several of his books already reviewed on this site observed in the introduction he wrote for this one that it “is a wonderful book.” Your commentator wholeheartedly agrees for it truly is a delight visually and textually. And it is also “letter perfect” with nary a typo or misstep to be found plus it has an index!

A Quest for Speed is one man’s words and images, for the author is also the creator of all the illustrations. Taken all together the book is its creator’s joyful celebration of his lifelong fascination with speed. But not undisciplined speed, for this book most particularly celebrates and pays tribute to those straight-line land speed seekers and the machines they imagined, then built, and subsequently accomplished with them. Moreover, it isn’t merely that the book shows and tells, as the subtitle indicates, an “epic saga.” That the book exists is rather “epic” for this is the author/illustrator’s first-ever book.

Barry John did considerably more than the research and writing of the words for, as said above, he also created each and every one of the in excess of 370 illustrations, 327 in color and 45 in greyscale. He also designed the pages including the very useful Specifications table that accompany each of the nearly 100 car/driver profiles provided on facing page pairs. Evro Publishing exhibited great good sense in publishing the book! Moreover, the oversize landscape format selected is just right for properly conveying the overall lengths (some in excess of fifty feet long) of the more modern-day jet- and rocket-powered LSR contenders’ own shapes.

The salt at Bonneville is now too thin to support the very narrow solid wheels and too short to permit a full power run at the speeds Thrust SSC makes. So, builder Richard Noble and driver Andy Green conducted their test runs on a Jordanian desert and the timed run at Black Rock Desert, Nevada. Two Rolls-Royce turbofan Spey jet engines were mated and pushed Thrust SSC past the sound barrier to a top speed of 763.035 mph.

Every page is a visual pleasure with each drawing individually and meticulously created for accuracy of the vehicle and its driver and sometimes its builder. Your commentator was curious regarding John’s artistic inspirations so made inquiry and learned he’s “Long [been] an admirer of American illustrator Nancy Stahl and Japanese artist Hajime Sorayama.” Unfamiliar with either I searched further and then understood. If you are so inclined I’d wholeheartedly encourage you to look at both Stahl’s and Sorayama’s art too. Just key their names into your computer’s search engine. You’ll see!

Further inquiry regarding his medium netted this, “As a graphic designer I am very experienced with Adobe Illustrator. Mine is quite old but there is no need for anything more up to date. Illustrator is ideally suited to drawing mechanical things and graphic logos. Photoshop would take twice as long.

“With reference[s] sorted, I draw a blueprint of the car and then build up each element—tyres, wheels and bodywork on to different layers. Flat colour is then applied, which is relatively simple but only when applying light and dark graduations do the drawings really start to come alive.”

A sampling of three of the “In betweens” include this electric-powered effort in Staten Island, New York at the turn of the century. Called the Electric Torpedo its sinister shape was enhanced by its all-black color. Its electric motor sucked the power from nickel-iron batteries and required a two-man crew as the greyscale drawing shows. Best recorded speed achieved was 70 mph which may not sound that fast but consider the May 1902 date:

Bill Burke ran annually on Bonneville’s Salt Flats for a record in a variety of vehicles he developed and built in many different classes for no less than 50 years. He earned his nickname “father of the belly tank” by being the first to adapt WW II-era aircraft surplus wingtip tanks into aerodynamically-shaped LSR contenders:

Another Bonneville and California dry lakes runner is rather unconventional. Bombshell Betty may look cartoonish but she made speed. Her best was recorded in 2013 at 165.735 mph. Not bad for what at the core is a 1952 Buick Super Riviera running with its straight-eight, admittedly modified and bored out to make 340 hp. And yes, the bomb atop the engine is functional; it’s the air scoop: 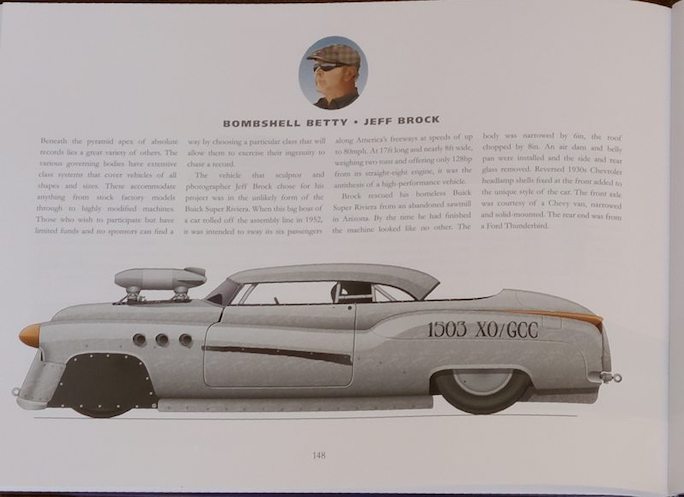 The concluding segments include ones titled “The Last Frontier” and “The Source of Power.” As with all that came before, Barry John doesn’t shy away from technical aspects and explanations but these laying out what’s required in the future are particularly interesting in terms of technology and money not to mention space to achieve that targeted 1,000mph!

So buckle up and prepare for a tremendous fast, fast and faster read.

Quest for Speed: The Epic Saga of Record-Breaking on Land