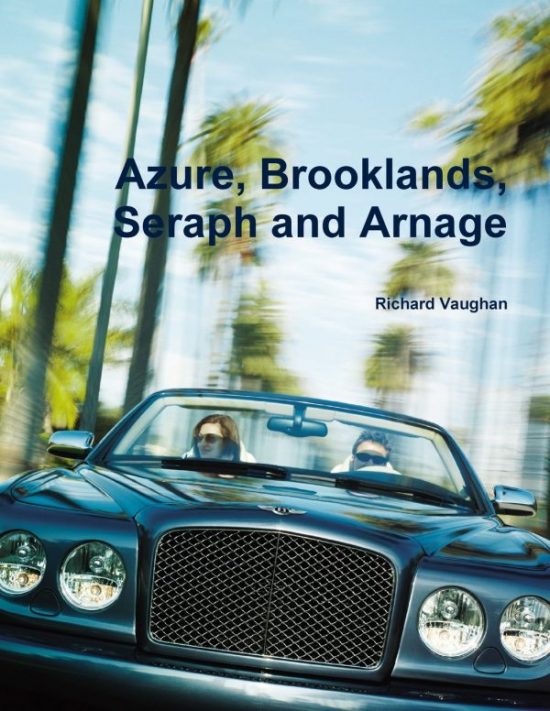 Many, many books celebrating Rolls-Royce have been published over the last several decades. Some authors attempt a complete history, but in the last few years there has been a trend to cover, usually extensively, specific models—consider Martin Bennett’s book on the postwar Phantoms and Davide Bassoli’s book on the Silver Clouds. Malcolm Bobbitt and others have covered the immediate predecessors to the cars found in this book, the Silver Shadows and the Silver Spirits/Spurs. Richard Vaughan has a particular affinity for the generation of cars after those, and here offers a follow-up to his first book on the Silver Seraph series and its Bentley variants. These cars were built from roughly 1997 to 2009. For some, the Silver Seraph (1998–2002; the Arnage lasted longer) is the last authentic Rolls-Royce model because it is the last to be manufactured at the traditional “factory” at Crewe before the Rolls-Royce and Bentley marques were separated under new ownership. 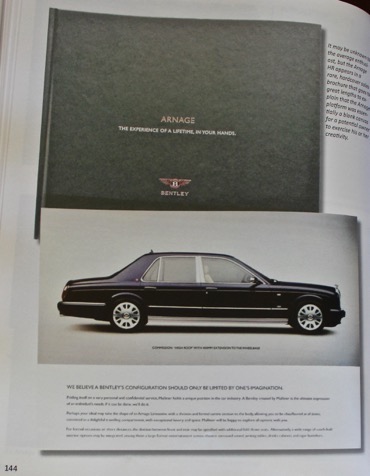 What may be surprising to those steeped in Rolls-Royce/Bentley scholarship—and will definitely be so for the casual fan—is the number of variations of the two basic models, the Rolls-Royce Silver Seraph and the Bentley Arnage of which the Azure is the two-door convertible model and the (second series) Brooklands the two-door hardtop coupe. Variations of both are discussed and illustrated. Vaughan tells of how a section of the factory at Crewe was designated as the in-house coachbuilder, Mulliner, one of famous stand-alone coachbuilders that was absorbed by Rolls-Royce. Many of the cars fashioned there are not well known to the general public, and it is here that the author makes a major contribution to Rolls-Royce/Bentley literature. The photos and the information of such rare models as the Bentley HR (for high roof), the Arnage Limousine, and the armored cars alone recommend the book. 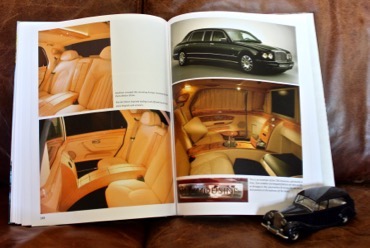 Vaughan includes information on how Crewe, in the 1990s, became heavily involved in encouraging the customer to design individual interior accoutrements, body modifications, and exterior color schemes. Other features of the book include the details of the various wheel options used throughout the series—an aid for hardcore Rolls-Royce/Bentley spotters; production numbers; and detailed information concerning a handful of owners who had made a significant contribution to the design of their cars. Rolls-Royce ties to BMW, the current corporate parent, are explored. Yet another part of the book offers advice and a checklist for those considering a Silver Seraph or Arnage purchase—and here the potential buyer is warned of the considerable expense of repairing, maintaining and/or restoring these exalted, complex motorcars.

Although we recommend Azure, we would be remiss if we did not warn that this book is a sort of curious addendum to Vaughan’s The Complete Guild to the Rolls-Royce Silver Seraph and Bentley Arnage. Much of the text and many of the photographs are repeated here from that book. We would also have liked to have seen a consistency in the quality of the photographs. Many are artistic, sharp and clear, but too many are not. Both Rolls-Royce scholars and Rolls-Royce geeks would have appreciated chassis numbers—and an index would be a welcome addition.

Until Vaughan—or someone else—decides to publish a more definitive and handsome book on the Seraph/Arnage series, something that will probably not happen for at least several years, if not a decade or two, due to the vast amount of detailed research required, this book is worthy of any serious automotive library.