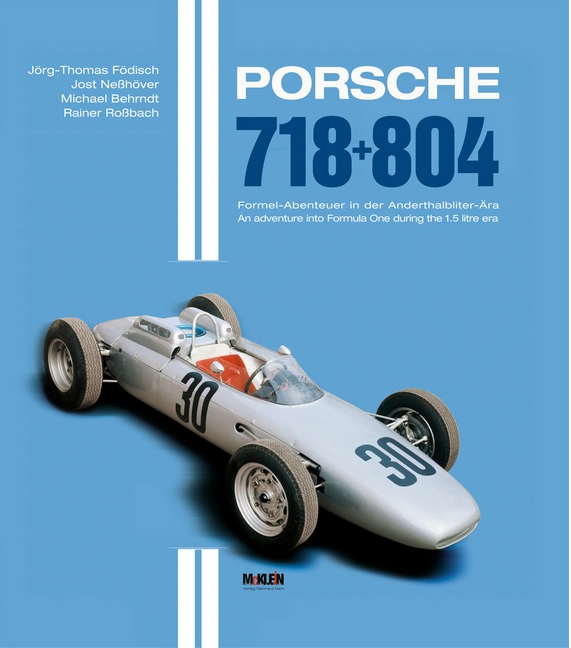 (German/English side by side) Brought to you by a team of authors with a long string of racing books to their names, this large and heavy book fills a gap in the panoply of literature on individual Porsche models. Maybe the reason for the previous lack of coverage is that these particular models had such an uncommonly short lifespan because Porsche never really did wholeheartedly commit itself to being a presence in, first, F2 and then F1. Pretty much from the beginning the firm’s sports cars had been successful in racing and rallying—which, as intended, directly related to and boosted the sale of road cars and in turn provided the cash flow to keep racing—and a campaign in formula racing was seen as a distraction with doubtful return on investment.

The book covers the evolution of the 718 (1958–1962) from the firm’s first purpose-built race car—the 550—and its metamorphosis from road-legal sports car with two seats and steering wheel on the left to single-seater racecar (the 718/2) specifically created for Formula 2 and its subsequent evolution into the 804 for F1.

In terms of engineering this is an interesting chapter in Porsche history and there is much to discover here. From design considerations to rule changes and from building to driving to servicing the cars, a complete picture of Porsche’s foray into this, for them, new and untried endeavor emerges. The technical aspects are seamlessly interwoven with the overall story of commerce and company philosophy, people and events. The largest portion of the book, some 80 pages, covers the races. Two of the authors are credited with writing the text and their respective chapters are identified at the end by their initials. Various sidebars contain information peripheral to the main story; one of them lists the 38 men and 1 woman who fielded these cars.

The story is told in an engaging, almost conversational style. This is especially true of the German version, presumably the original, which is brimming with the sort of colorful figures of speech and colloquialisms so particular to the German language. For the reader who reads the book ineither language, all is well. Each version tells a fluid, cohesive, detailed story—but the two versions are not identical! The basic framework is the same, the same dots are being connected but there are many instances of one version containing detail the other doesn’t—a snippet of deeper background here, a name or chassis detail there. This is not a deficiency, merely an unusual way of doing things, the assumption being that German readers will bring a different level of familiarity with the topic to the table than international ones. One of the main authors did the translation himself and while a British editor went over the text, there are certain peculiarities in the English version that are puzzling. One example: when p. 24 says that “Dusio’s business went into administration” it is only the context of the story that helps us figure out they must be talking about “receivership.” 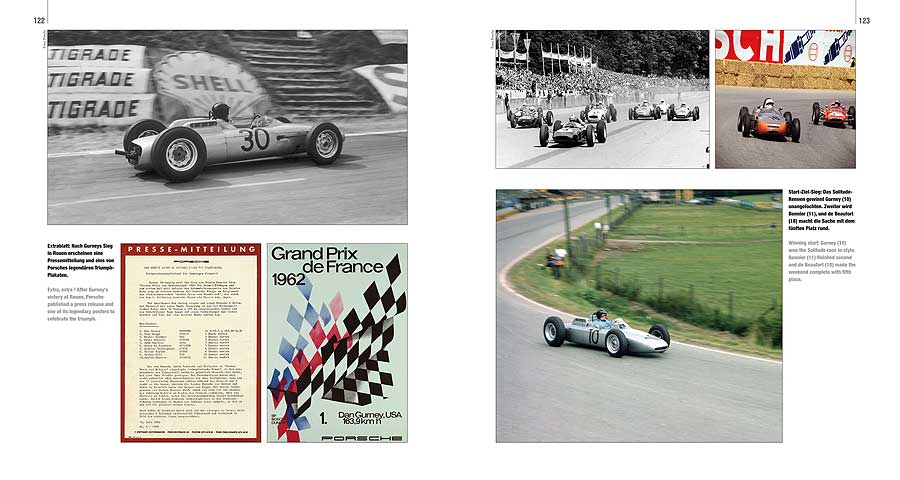 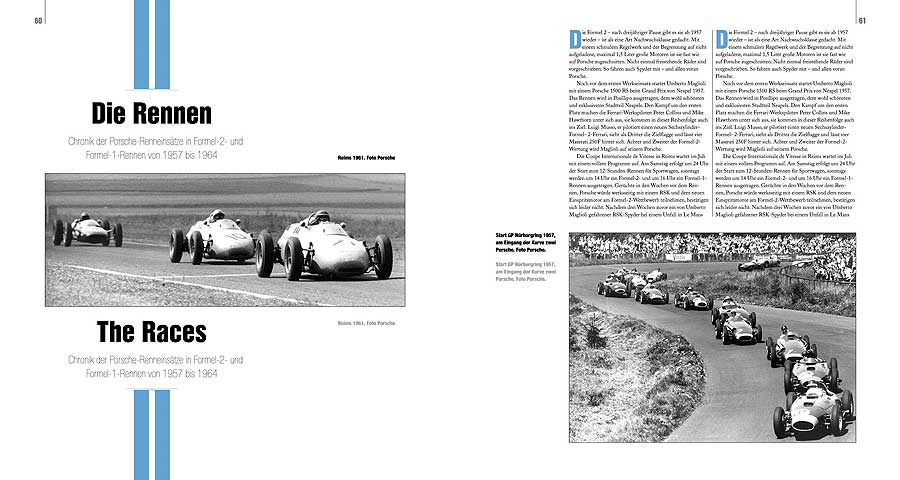 The period photos are a main draw of the book. There are many, often quite large, from a variety of sources, and all very well reproduced on excellent paper. Many are also new to the record. The photo captions are quite detailed, identifying people, cars, and locations. They are followed by their English translation, offset in a different color.

One of the authors produced the almost 20 pages of statistics (the Impressum page lists what each author did, and, incidentally, also contains a bibliography) that covers in satisfying detail the 1957–1964 seasons. They are presented in order of year by date, series, event, driver/entrant, car, qualifying/finishing position, and notes. Each German table is followed by a full translation into English.

Ford in the Service of America: Mass Production for the Military during the World Wars »
« Fast Company: Six Decades of Racers, Rascals and Rods