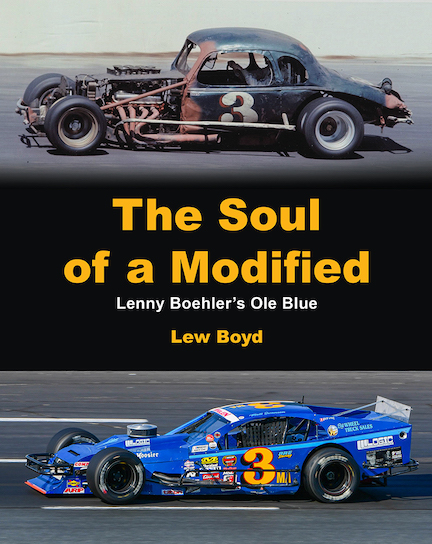 “Dressed like Clark Kent from the farmlands, Lenny was racing’s Superman with a wrench. His mechanical mastery led to hundreds of wins with his home-built Ole Blue race cars, with some of the country’s finest behind the wheel.”

Think of anthropomorphism what you will but the fellow who wrote this book and certainly the people he writes about think that Ole Blue is sentinent, or, in the colorful words of one of its championship-winning drivers, can “smell and grow hair.” Which is odder still when you consider that Ole Blue is not one single car but the collective name for a whole slew of race cars that have been campaigned by successive generations of the same family for over 65 years. Take a look at the cover: except for the race number, these two cars have not much in common. It’s as if . . . wait for it . . . the SOUL of the primordial Ole Blue lives on in its namesakes.

The book is more than a clever title. Its author does not only own his own publishing (and bookselling) house, which has tended to this particular patch of the motorsports garden for going on two decades now, he has been a racer himself, since the tender age of 16, undeterred by a bout of childhood TB. Even a Harvard degree couldn’t keep him away. (The “181” in his firm’s name has been his car number for much of the 43 years he drove; that it reads the same upside down is not without humor because even good racers spend some of their time wrong side up!) And that he also is a Northeasterner is not the least thing he has in common with Boehler who hails from East Freetown, Massachusetts.

This book came out the year Ole Blue racked up its 65th season of turning a wheel in anger. It’s odd that it took that long for anyone to think this was a story worth telling—as odd as it was for the New England Antique Racers Club to make Len Boehler a Hall of Famer only posthumously.

Another preliminary note about this book is to say that even if Modifieds are not your cup of tea, read it for the human aspect of the story, meaning it illuminates the relationship between man and machine. (Also, it’s simply very well written.) A key take-away here is that it wasn’t deep pockets that gave car owner/builder Lenny Boehler’s team staying power and success—300 races, 14 track championships, and six NASCAR Modified series titles—nor was it luck, which, if it does happen, is usually more of a streak than a permanent condition. Besides, there were dark times. The combination of grit, focus, mechanical sensibility, and setting an example that inspires others to follow which all the Boehler clan seem to have internalized is what tips the scales.

This is a bigger story (thank goodness there’s an Index!) then you may have thought when the book title here first caught your eye. There are so many inspiring stories of things and people long gone but what Lenny Boehler started is still here and still strong. Go visit them at Beach Bluff Road in East Freetown. As of 2021, BRE is stepping away from running full-time with the Whelen Modified Tour to focus on events closer to home.

The Soul of a Modified