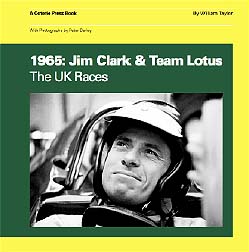 On the face of it, a 208-page large-format book about just eleven race weekends that took place 45 years ago in England seems fairly indulgent. But when the subject of the book is the incomparable Jim Clark, and the year is 1965—the year he won the World Driver’s Championship with six Grand Prix victories and became the first driver ever to win the Indianapolis 500 with a rear-engine car—it suddenly comes clear why Coterie Press produced 1965: Jim Clark & Team Lotus. Actually this book is Coterie’s second book on Jim Clark joining their previous title Jim Clark: Life at Team Lotus that was written by the photographer whose work illustrates this book.

Let’s start off noting that only one of the eleven races covered in this book is a Formula One competition (the British Grand Prix at Silverstone in July) which Clark won from the pole. All of the other weekends were part of Britain’s National series of Formula Two, Formula Three, sportscar and touring car schedule.

Remember, this was the era when even (or especially) a top-form Grand Prix driver like Clark was expected to compete nearly every weekend in whatever machinery was available. For Clark, his close relationship with Colin Chapman of Team Lotus meant that he had access to and would drive some of the best racing cars on the island. Thus his weekend exploits frequently resulted in victory. Chapman had hired young photographer Peter Darley to record on film the team’s 1965 season and it is his wonderfully evocative black-and-white images that illustrate this book.

Arranged chronologically, the book opens with the Race of Champions at Brands Hatch in mid-March. From there it goes to a rainy race at Silverstone, an outing at Oulton Park, onward to Snetterton, then Goodwood, and on. These are among the most famous of British racing venues. But famous or not, each race weekend is presented with careful attention to detail, from practice, through qualifying and the race itself. There are charts for the starting grid and finishing positions for each weekend’s race accompanied by long paragraphs describing the action. Best of all are the occasional quotes sprinkled throughout the pages. Some of the quotes come from contemporary newspapers and magazines, some from people who were Clark’s friends, family, or peers.

Then there are the photos. They aren’t just pictures of Jim Clark, but constitute a veritable who’s who of international motor racing in the 1960s; Graham Hill, John Surtees, Jackie Stewart, Dan Gurney, Mike Spence, Jo Bonnier, Bruce McLaren, Dick Attwood, and Jack Sears, along with a host of other greats and near greats. Those photos share the pages with others of mechanics, racecars, transporters, and everything else that you’d find at a typical race weekend. There wasn’t a lot of advertising visible then either. Those were the innocent days; not every driver had an agent and a PR person or had every square inch of racing togs covered with sponsor logos. If you have been brought up seeing these cars in the grey-haired paddocks of today’s vintage races, what might strike you most is how young the drivers, mechanics, team owners and officials all were. Darley’s photos prove his fine eye for finding his subjects, and they come to life in all the glory of their youth in the black-and-white images on the pages of this book.

Clark could and would drive almost anything. He was devastatingly quick in the tricky Lotus 30 sportscar, a demon in his three-wheeling Lotus Cortina sedan and, when he was on, was all but untouchable in his Lotus 33 Grand Prix car. And, of course he won at Indy driving a rear-engined car in a field made up mostly of front-engine roadsters. Many will know that Clark would lose his life three years later, running in a Formula Two race in Germany. He was a driver who all of the other competitors looked up to and admired. His death was a tragedy that rocked the racing world. But there is no hint of that in the happy faces of 1965, when the race team and its top driver were at the top of their game. If ever there was a dream season for a team and a driver, 1965 was it for Team Lotus and Jim Clark.

The book is beautifully made and a joy to leaf through even without reading the precise prose wrought by author William Taylor. Taylor is not only an ardent racing fan and loyal Lotus supporter, he also co-owns the publishing house that produced this marvelous book. Quality costs money and at $49.95 this book from Coterie more than delivers upon its promise. Indulgent? Perhaps. But it is a wonderful book to pick up again and again to marvel at those innocent and happy days when racing was something more than big-business.