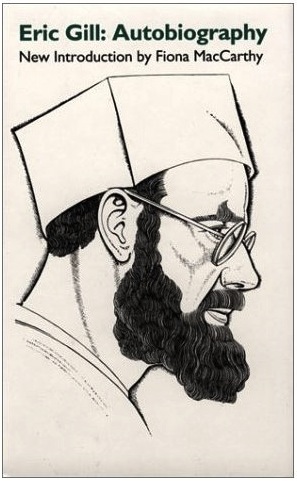 You’ve seen a Land Rover? A Rolls-Royce? Ever wondered about the crisp lettering of the logos? Wonder no more—Eric Gill’s your man.

Admittedly, even for us, who are known to advocate eclectic libraries, presenting this book is a stretch. But, it is a good read, it is a vastly engaging story, and it has a car connection!

Before we get into the book we should mention another car connection, this one rather more “deep” than the Land Rover/Rolls-Royce logo plates even if surely not widely known outside Rolls-Royce circles. The man behind the cars that came to embody the very meaning of perfection, Henry F Royce, once made a remark to a neighbor, Vicar Gill, after repairing his lawnmower. The remark was to the effect that no task, however small, was meaningless. Gill Sr. repeated this remark to his son Eric who paraphrased it and carved a Latin inscription into Royce’s mantle piece that would become the famous motto that is so indelibly associated with the Rolls-Royce company: “Quidvis recte factum quamvis humile praeclarum.” Whatever is rightly done, however humble, is noble.

One can only wonder what the avowed anti-capitalist and Catholic socialist Eric Gill must have thought of the person whose very product reflected the pinnacle of ostentation. As a craftsman and artist Eric Gill obviously recognized a kindred spirit in Royce’s commitment to a job well done but his autobiography does not mention any of the above. In fact, his book is not about events but influences. Gill himself suggested to call it an autopsychography, claiming “. . . nothing particular has happened to me—except in my head. I have done nothing in the way of remarkable deeds.”

The introduction by Fiona MacCarthy hints at the discrepancies in Gill’s autobiography. By definition, an autobiography removes itself from the checks and balances of an independent “audit.” MacCarthy has written a number of biographies of art figures, among them the well received Eric Gill, A Lover’s Quest for Art and God (1989, now out of print, ISBN 0571137547), of which The New York Times said “Few men have been better served by a biographer.” Ideally, one would read both books together.

Unlike his private diaries (to which MacCarthy had access), Gill’s autobiography is so blatantly sanitized that one is hard-pressed to reconcile his public account with other undeniable facts of his life, such as the incestuous relationships with his sisters and daughters or the tumultuous life in his religious arts and crafts community. However, these sins of omission ought not diminish his significant accomplishments as an artist and artisan. Unless you already are familiar with his work you may be surprised to learn just how varied his output is and how inseparable his art was from his convictions.

Gill resisted his publisher for 10 years. Finally, in his late fifties and in precarious health he relinquished and wrote the 100,000-word manuscript in half a year. When he saw it in proofs he mused, “It’s not going to be such a bad book as I imagined.” He died a week later, on 11/10/1940.

Gill’s way of writing, of thinking out loud, reveals a complicated existence. There is a certain disjointed randomness to his reflections about Man, and God, and the Universe, and Deep Inner Stirrings. People who knew Gill say he wrote the way he talked and that in this book his own voice comes through as if he were sitting across from you. This book is not for “speed[y] readers” but, if it strikes a chord, will be a companion for years and food for thought.

Posted Under: Biography, Biography/ Autobiography, Other Genres | Author: Sabu Advani | No comments yet