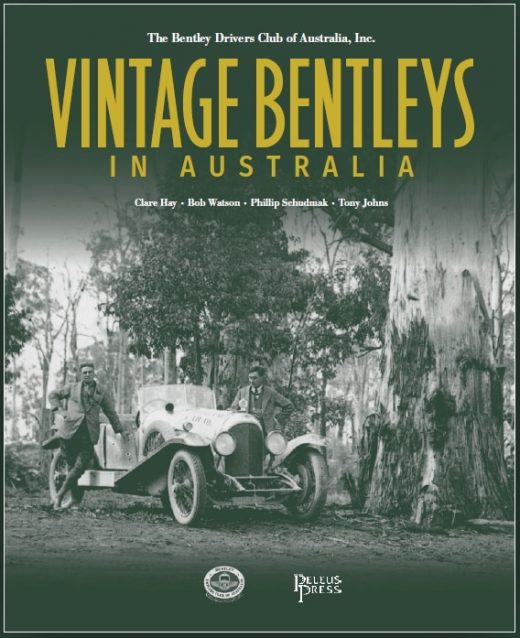 “There is nothing quite as inspirational and impressive as the roar of a passing, hard-driven WO proudly wearing its patina and road chips as a badge of courage. We are fortunate to be custodians of these cars that, even in today’s busy traffic conditions, are able to cover long distances in speed and comfort, which is a direct legacy of their racing successes.”

Well, “comfort” is a relative measure but the fact is that more than half of the 3023 Vintage Bentleys built survive (this is the new consensus figure of what for years was tallied as 3038) and that is a testament to these cars possessing uncommon inherent qualities. It is especially telling that Bentleys did well in rugged Australia, subjected to real-life, prolonged hardships far beyond the weekend “trials” and “hill climbs” to which the sporting crowd took their cars.

Published by the Bentley Drivers Club of Australia (BDCA) on the occasion of the 100th anniversary of Bentley Motors in 2019 this book will be different things to different people, which is not a bad thing but makes it hard to describe. 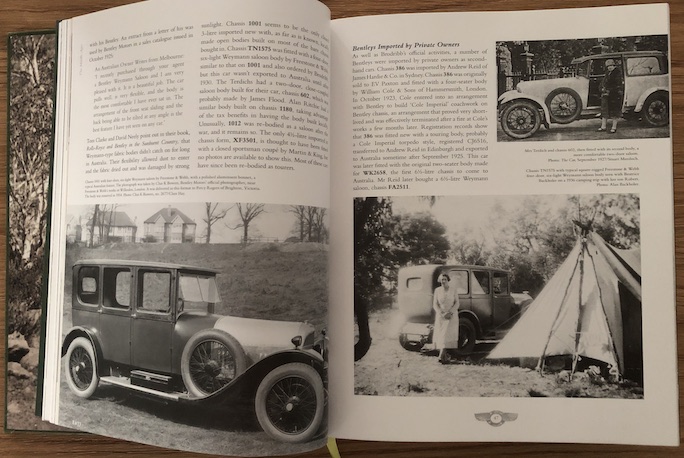 First and foremost it is a history of the BDCA replete with lists of members and committees and trophy winners. As this would be of primary interest only to club members, the book broadens its appeal by recapping the history of early motoring in Australia in general and Bentleys in Australia in particular. 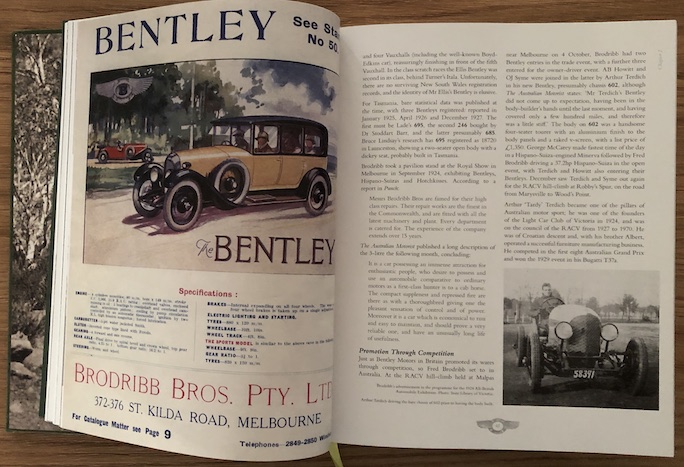 Anyone with an interest in social and lifestyle history, made more colorful by the fact that the continent’s geography spawned fairly unique population patterns, will find something new here. Moreover, the book offers a rich photographic selection that, inevitably, depicts a whole lot more than (heresy!) boring old cars. Lastly, it branches out into a topic of pretty much universal importance to scholarly types, a page-long data set and description for each of the 152 vintage Bentleys that went to Australia. You can gauge the importance of this material by the fact that it takes up about 180 of the 416 pages. The one fly in the ointment here is that the entries (see below) do not begin with the chassis number (although [within model] they are sorted by it) and that the chassis number, the fourth line from the top, is not set large or bold. Nor is there is a list or table of all the chassis, or an index. Everything in the Bentley (and Rolls-Royce) world revolves around chassis number so not featuring it prominently isn’t helpful. 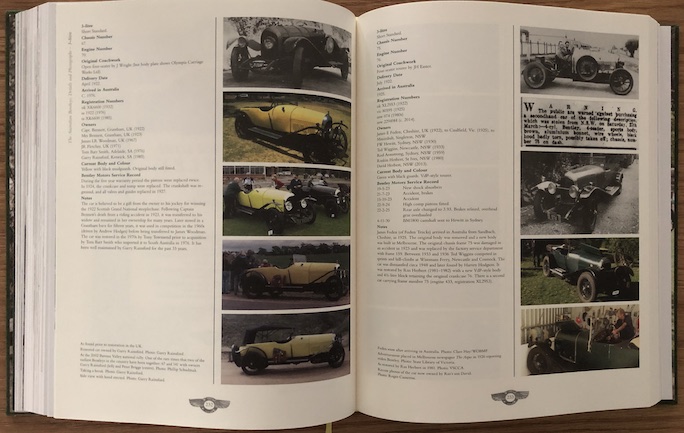 Brimming with high-end production features (paper, binding, printing) the book is limited to 600 copies so if you see one in your future, do not delay! The BDCA, as one would expect and as the book makes very clear, is a small organization so for them to be able to bankroll such a fine publication, which included sponsoring research trips by UK-based lead author Clare Hay, is a truly splendid thing. 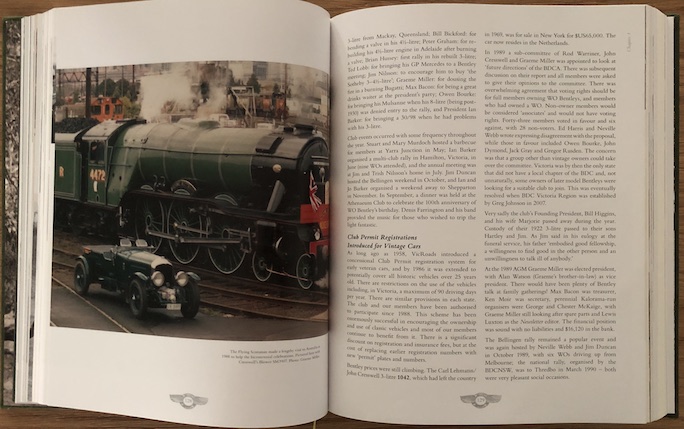 Anyone even peripherally familiar with the Vintage Bentley literature will of course recognize Hay as the towering expert of our time. Her publishing activities have been exceedingly sparse in recent years and for her to have taken a multi-year interest in this project is rather a surprise. The hard data is based on factory service and production records, registration records, and data held by the various Bentley clubs in the world. 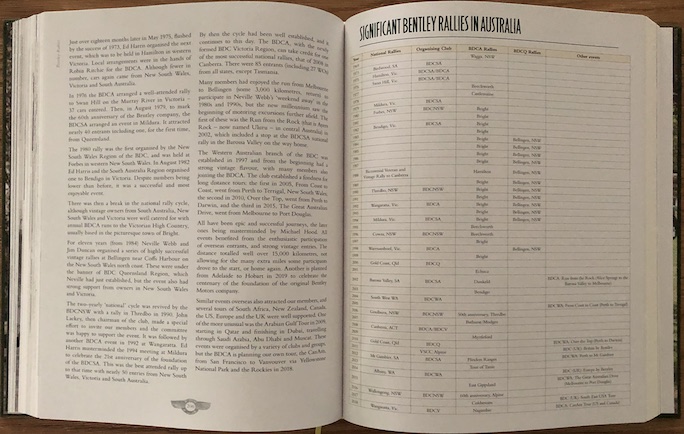 What began in 2010 as a plan for a “booklet” has mushroomed into a properly important book that has no obvious omissions other than self-limiting its scope: coverage ends in 2010, that part of the story, from 1956 onwards, being handled by Australian rally driver and journalist Bob Watson. He also penned the general introduction to motoring in Australia and in fact had come to the attention of the BDCA by having written a similar type of book for the Light Car Club of Australia. The other two authors are BDCA directors and handled specific ancillary aspects of this book such as culling the almost 4000 images submitted for consideration down to about 1000 that then had to be identified and captioned. Since many of these came from dusty attics and rumpled shoe boxes it is a given that they are largely new to the printed record.

Lest you think that Australia couldn’t possibly have mattered to Bentley sales (aside from the fact that the firm was started with a good chunk of the seed money coming from the Australian side of Bentley’s mother’s family, and, later, Bentley Boy Bernard Rubin becoming the first, and until 1983 only, Australian Le Mans winner) consider that far-away and desolate Australia ranked fifth globally in total vehicle ownership ca. 1930.

While the casual reader—or casual car owner—may not appreciate the importance of clubs to the survival of a marque, the chapters in this book detailing the founding of the BDC of Australia (1956) make crucial reading for those who do understand such things. Based on key bits of correspondence reproduced here, it must be said that the first and thus dominant Bentley Club in the world, the BDC in England, did not do itself proud here!

“This book is the result of a stubborn determination to record the history of WOs in Australia before it is lost forever,” says the introduction. The book does that, and so well that it should serve as a primer for other clubs and also a reminder that in anything related to primary sources about vintage cars, time is not on our side!

Images Publishing, 2019   [In US: autobooks-aerobooks.com]

In Australia & rest of world: