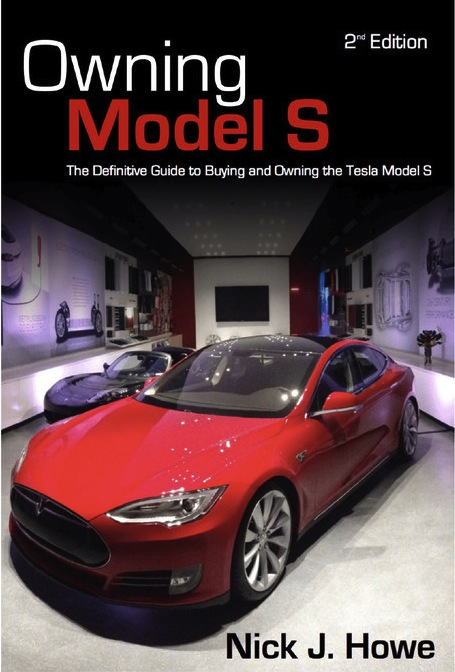 “Model S has been described as not so much a car with a computer, but a computer on four wheels.”

Does your car get better with age? A Tesla does. Every month.

Before we get too giddy it should be understood that pretty much all cars are going to [have to] go that way; it’s just that Tesla is already downloading improvements to your car, once a month, without you having to be involved.

In this, Tesla is not only again a disruptor of ways of thinking that are incompatible with a sustainable future but is setting benchmarks in ways no previous nor current maker of electric vehicles is.

Whether you already own a Model S—“performs like a Lamborghini, has the luggage capacity of an SUV, the fuel economy of a small motorcycle, and the crash protection of an Abrams tank”—or are merely curious about it, the book offers a competent and enthusiastic introduction to a machine that, as Howe likes to put it, “is in many ways like every car you’ve ever owned, but in many other ways is like nothing you’ve ever owned.” The mainstream automotive press, with its playing-up of the bizarre and the titillating (software hacks, car fires, range anxiety, legal issues in regard to how and where Tesla sells cars etc.) has not helped matters much and so it is no wonder that half-baked information is keeping people from fully appreciating the car and the man who put it on the map. (Elon Musk, incidentally, did not start Tesla, which is one of those persistent errors.) 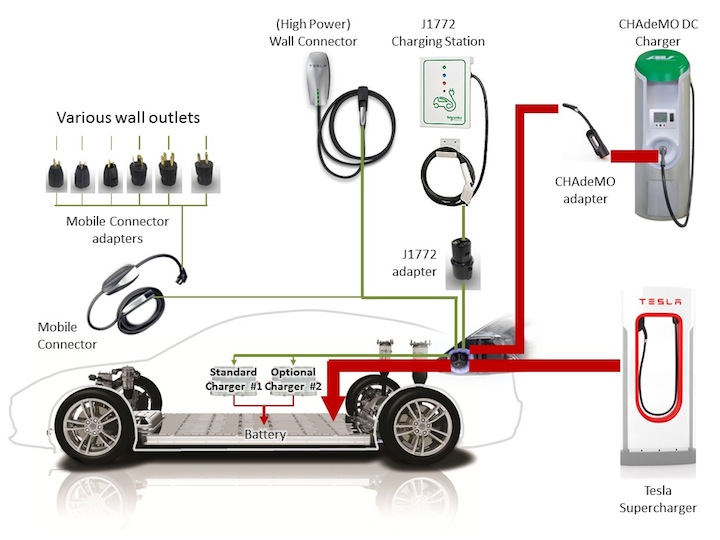 Author Howe and publisher Pressman are both not only Model S owners but early adopters (chassis 2298 and 0184, respectively), so early that when they signed their deposit checks and became “reservation holders,” nothing but a prototype and high hopes that the car would make it to production existed—no matter how much the press derided it as vaporware and a passing fad. Naturally their paths crossed at various Tesla events and over time, Howe, an engineer (VP of Learning and Collaboration at Hitachi Data Systems) by trade and conviction, took it upon himself to organize the growing body of Model S knowledge for the benefit of the Tesla Motors Club. The Teslarati crowned him Answer Man, the go-to guy for other curious souls, and that’s what lead to this book. 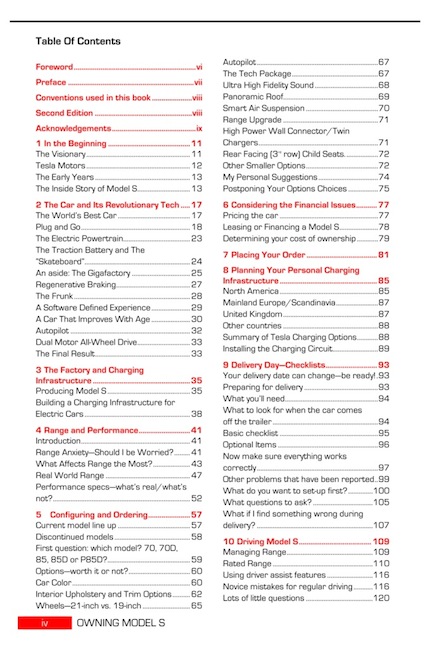 It contains both general information about the philosophy of the BEV (battery electric vehicle) and very specific background and tips for the Model S that will appeal to those who are considering a Model S and those who already have one but want to know more than what the fairly short owner’s manual tells them (one example: the manual says no towing but Howe shows how). With the owner in mind, the book is sized to fit into the glove box (an entirely too anachronistic term for this 21st century!) to be handy when you are stumped by a certain display (there are almost no conventional switches etc.) or an unexpected sound or can’t decide which settings are best suited to a particular environmental or driving condition.

Howe obviously has his own first-hand owner experience on which to draw (20,000+ miles, which, just to make you curious, cost him a mere $600 in electricity) but also, thanks to his role on the Tesla forum, can amend or sometimes event contrast that with other people’s insights. The worldwide Model S fleet of tens of thousands of cars has amassed over a billion miles since 2012 and their owners are uncommonly engaged with each other—an inevitable byproduct of being pioneers. 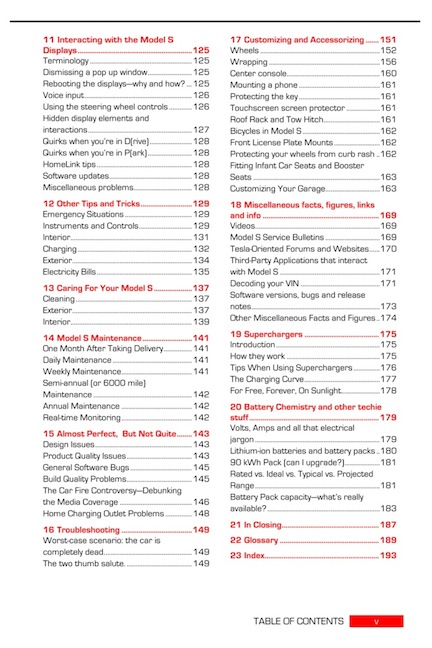 Lest you think Howe is blindly enamored with this new-fangled technology do realize that he freely addresses problematic issues such as real-life average range (there are many moving parts to this calculation, and it is one of the areas in which Tesla is obfuscating) and the true cost of ownership (one caveat: his comparo to a gasoline-powered car assumes a $4/gallon cost but even if you adjust for current prices a BEV comes out way ahead). He is also not afraid to say that per unit of volume gasoline has 20–30 times the energy density than a Lithium-ion cell, which is of course why a Model S needs up to 7100 cells (depending on which of the three battery sizes you select) weighing over 1000 lb. And while he will say that one should expect 3000 cycles out of a pack, he does not say, or even prepare the novice for this fact of life, how much it’ll cost to replace it.

Howe also covers various setups for the most crucial requirement for BEV ownership, the charging station in your home garage. From removing the nose cone to mount a radar detector to aftermarket rim and tire combos or how to get a color other than the limited range offered by the factory (car wraps!) Howe offers answers to questions you didn’t know you’d have.

Well-illustrated, nicely designed, typeset with a clear grasp of how a user will interface with the book (headings, chapter organization, index etc.) there is not one aspect of the book that smacks of amateurism. And especially at this absurdly low price, it is a gift that keeps on giving.

When you do become an owner, know that the publisher offers several nifty aftermarket items.