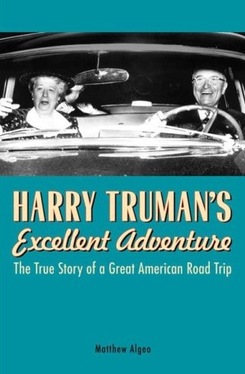 Road trips, and the books wherein the tales of each are told, continually attract and delight readers. First-person stories from writers like William Least-Heat Moon with his Blue Highways and John Steinbeck telling of hisTravels with Charley have entertained, informed, and motivated others to go exploring.

Some, however, needed no third-party inspiration. All Harry and Bess Truman required was time. Time free from other commitments—like the presidency. However, as they discovered, once having occupied the White House as the first couple, it can be a tad difficult to go anywhere without being noticed.

Truman was a Chrysler man making his newly acquired 1953 New Yorker—a black, four-door sedan riding on chrome wire wheels dressed with whitewall tires, fitted with a 331 cubic inch FirePower V-8 that answered to its Powerflite transmission—the “star car” of this particular narrative. But others feature prominently too including Harry’s first-ever automobile, a 1911 Stafford in which he had courted Bess. (Anyone remember those machines?)

There are other vehicles with feature or cameo rolls too such as the elegant “eighty-five-hundred-dollar limo complete with smartly uniformed chauffeur” provided compliments of the Packard Motor Car Company” while Harry and Bess were visiting the destination of their trip, the nation’s capitol. Then there are Ferdinand Magellan, the Presidential railcar, The Sacred Cow, a military C-54 modified explicitly to carry the president, and its successorIndependence, a Douglas DC-6. These airplanes are viewable today—inside and out—at the National Museum of the United States Air Force located on Wright-Patterson Air Force Base in Fairborn, not far from Dayton, Ohio.

We might still have that delightful practice of naming presidential transport to this day if it hadn’t been for that one time when Truman’s successor, Dwight Eisenhower, aloft in his aircraft Columbine flying with “the call sign Air Force 8610 found itself in the same airspace as Eastern Airlines flight 8610. The resulting confusion prompted the designation” that we are familiar with, namely any aircraft with the president aboard is “One” as in Marine One, Air Force One, etc.

It frustrated Harry and Bess that they were so often recognized, but that is also what made this book possible. Harry had been out of office for over a decade before author Matthew Algeo was born. Algeo was but a lad of five when Truman died. It would be fully a half-century-plus after the Truman’s trip that Algeo undertook to retrace their path and write about their—and his—experiences.

Algeo’s linking of then to now provide interesting contrasts to similar narratives about old Route 66. Unlike with The Mother Road, numerous structures, and even specific businesses, that Harry and Bess patronized in 1953 are extant today. While it’s unlikely they’d want to sleep in the same guestroom of the Parkview Motel in Decatur, Illinois, one of this countries first such motoring hotels—even the author declined to do so as it was converted to a minimum-security prison in late 1970s—they could still stop and eat (and the same meal even, albeit not quite at the same price; 70 cents then, $9.50 today) the roast chicken dinner with all the trimmings including desert and coffee at the Princess Diner in Frostburg, Maryland. Plus the Princess Diner is still owned/operated by George Pappas, althoughthis George Pappas is the grandson of the man who had served the Trumans.

I am a fan of books like this one. Understandably these more readable and interesting ways of presenting history would never be approved to replace textbooks. But it is precisely because they do bring life and lend perspective and relevance to history that they should be put in the hands of students. No matter the reader’s age, giving a human face to history suddenly changes learning. As though by magic, real understanding and comprehension comes to what is otherwise just a recitation of dates, events and names.

So, come see America as Bess and Harry Truman found it during their ramble in June and July 1953. You’ll travel with them from their home in Independence, Missouri to Washington, DC, then northward to New York before turning back west, via a different route, toward home. And simultaneously see those same roads, the same stops through Matthew Algeo’s eyes and experiences 50-plus years later all on the pages of appropriately titled Harry Truman’s Excellent Adventure: The True Story of a Great American Road Trip.