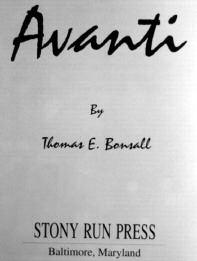 Originally published in 1979 and long hailed as the ultimate book on the Avanti, this updated and revised edition is a must for every Avanti enthusiast. The legacy of the Avanti in the pony car era is all but ignored while lesser marques from the Big Three are eulogized for their contribution to the art. Bonsall does a credible job of detailing the history of the Avanti from its inception to date. While some will disagree with his use of anecdotal comments, others would agree that they add insight to the story of why a car as technically advanced at its announcement, and visually stunning 36 years after its arrival in Studebaker showrooms, could have failed in the marketplace while copy cats succeeded.

The brilliant decision by Sherwood Egbert to start with a blank sheet of paper in an attempt to revive Studebaker’s already failing fortunes. And, the equally incisive decision to give that sheet of paper to the best industrial design firm on the planet headed by Raymond Loewy.

AVANTI: THE ALTMAN YEARS:
There is a joy in this book that rivals any soap opera. The Avanti comes alive after facing impossible odds again and again. The Phoenix rises from the ashes for the first time.

THE AVANTI COLLECTION:
The historical narrative is reason enough to buy the book. But the hidden gem between the covers is the stunning collection of Avanti factory literature, brochures, newspaper articles, and advertisements. They are presented in the middle of the book in chronological order. To the concours contestant, this is a treasure trove of original details from the past.

AVANTI – THE FINAL YEARS:
Blake, Kelly and Cafarro efforts. Whether or not you agree with the decisions they made, you have to concede that they tried. They really tried. The Phoenix Rising again.

APPENDIX I – AVANTI PRODUCTION:
Production numbers by year with explanation when the figures are not precise.

Regardless of where you started in the Avanti saga, you will want to own this book. It describes the origins of your particular car, yet it will open your eyes to the contribution of the other eras. The Studebaker cars gave us a rich technical heritage with industry-definitive advances in engineering and design. The Altman years are a bridge to the modern era. They represent tremendous staying power in the Avanti legend. The Blake/Kelly/Cafarro era brought the Avanti into form as a contemporary car that could stand on its own alongside the high end coupes and convertibles of the time.

The only disappointment in the book is that the illustrations are all in black and white. Given the small production run and the number of pictures, that is understandable. I cannot wait for a color version.

Posted Under: Automobiles, History, Out of Print, US | Author: Other | No comments yet

The Last Hero: The Gallant Story of Donald Campbell and The Land Speed Record, 1964 »
« Damn Few Died in Bed: Memories of a Life in American Automobile Racing