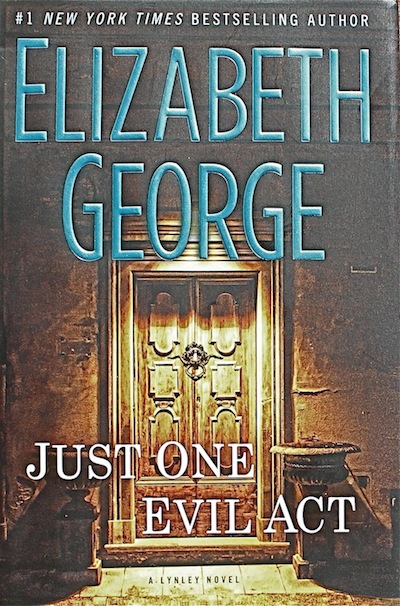 What distinguishes Elizabeth George from most if not all of her colleagues in the business of writing serial detective fiction is that she is a strong and compelling wordsmith. As fun as it may be to read Sue Grafton, her writing style is proficient at best. As a prose writer, even the renowned Agatha Christie is pedestrian. Reading George, one gets the notion that if she were to set her mind to it, she could accomplish substantive literature outside the confines of the murder mystery. Inside of it, she has, through the years, dealt sympathetically and sternly with social and moral issues. She has consistently displayed her gifts for creating round characters, despite the fact that when she initially presented the central characters, who have endured through eighteen books over twenty-five years, she had all but sealed these characters into a box of incredulity.

How likely, really, would it be that Thomas Lynley, the eighth Earl of Asherton, wealthy, aristocratic, would find himself a detective inspector at The New Scotland Yard? In the real world, it is doubtful that his sidekick Sergeant Barbara Havers, frumpy, always sloppily and inappropriately dressed, intransigent, constantly in hot water with her superior officers, working sometimes outside the law, would have sustained her career for any length of time. A complex backstory, introduced early in the series, a love quadrangle among Lynley, his wife Helen, Simon St. James, a respected criminologist, and his wife Deborah, overreaches. But because of the nature of a crime series, these characters must be used throughout the books while maintaining their essential personalities; and it is a credit to George that she has managed to overcome these initial shortcomings to develop, over time, reasonable characters who lead complex lives—as we all do—with their share of good times and bad. We sympathize with Havers as she has to deal with her mother’s dementia and subsequent care. It was a shock and a heartbreak to readers when Helen was senselessly murdered in the 2007 With No One as Witness, the thirteenth installment of the series (Evil Act is the eighteenth), a shock because the killing-off of a central character is certainly unexpected and a heartbreak because Helen was drawn as someone eminently likable, someone with a peculiar mix of frailty and steel. She was carrying their child at the time of her murder, and Lynley’s reaction to her death was disturbingly realistic. 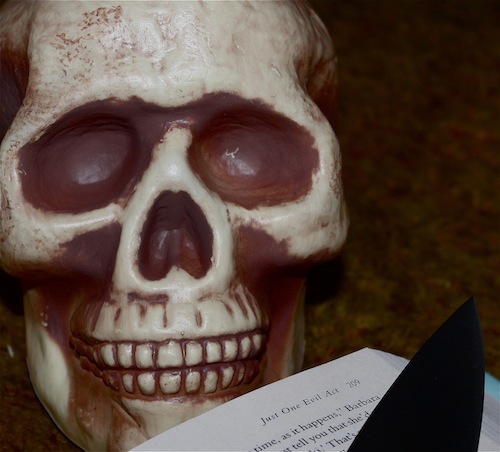 The Lynley mysteries are heavy. Evil Act weighs in at over two pounds. It begins with the kidnapping of nine-year-old Hadiyyah Aszhar, the daughter of Havers’ neighbor and good friend Taymullah Azhar, who is raising the girl alone. The relationship between Havers and the girl is warm and loving; the relationship between Havers and the father, developed through the last several of the novels, is likewise close and warm, but it is also satisfyingly ambiguous. Obviously they are very close friends, but is the friendship infused with romance? Will it be possible that a romance will ever be sexually consummated, a coupling of the slovenly copper and the slender, meticulous microbiologist? It is George’s skill that has kept this tension alive and believable for thousands of pages. The kidnapping takes place in Lucca, Tuscany. First Lynley goes there to sort things out, later Havers—despite the refusal and the warnings of Isabelle Ardery, Havers and Lynley’s guv, who has been for at least three of the novels, including this one, at the very end of her patience with Havers’ shenanigans and insubordination. Then, halfway through the novel, the child is found, safe and unmolested, although the circumstances and the actual perpetrators of the crime, by page 600 anyway, are not yet revealed.

But at this halfway point, Hadiyyah’s mother is murdered, Aszhar is suspected and held by the Luccan police. As is expected by murder mystery aficionados, George has dropped red herrings along the trail, has shined the light of suspicion on this one then that one, has muddied the waters of Havers and Lynley’s relationship and has the reader guessing then guessing again. And it is here that I must make my confession. I am (intentionally) writing this before finishing Evil Act; I have over a hundred pages to go. So I will probably stay up very late again tonight to see how George manages to unravel the plots and subplots and to see if my praise for her is sustainable. Which brings me to a second confession—or, better, a qualification. Despite my praise, my appreciation of her ability to write strong prose, my general approbation of her skills as a mystery writer, I realize that in some ways George can be annoying.

She is an American writer, based in the state of Washington, but she insists on sprinkling the pages, too liberally, with Anglicisms—aggro, tyres, dustbins, fags (cigarettes), and too many bloody hells. These come across as affectation. Also, too often her secondary characters are painted broadly and grotesquely. The tall, athletic villain Em Cass dresses in men’s clothing, including masculine two-tone shoes, and is fond of anonymous sex. Michelangelo Di Massimo, a Pisian private detective implicated in the kidnapping, vain and not the brightest, although dark and hirsute, has his head hair dyed sunshine yellow. Even Lynley’s new love interest Daidre Trahair, albeit not a grotesque, is a zoo veterinarian, treating rhinos, apes and elephants, a formidable dart player and her passion is the roller derby. Well, even Moby Dick and Anna Karenina are not perfect, and though the Lynley mysteries are not quite as famous as these, they are famous. George has sold millions of books throughout the years, has garnered a large, loyal fan base, has won the Agatha, the Anthony and the prestigious Edgar, and the series had been adapted for the British Broadcasting Company. The “Inspector Lynley Mysteries” ran, starting in 2001, for nearly seven years. So, those of you who are already George fans will not be displeased with Just One Evil Act, and those of you who are now being introduced to the author would not be wrong to pick up this book, although the best way to begin would be at the beginning. Turn off the TV—and too, you may eventually have to take leave from your job—procure A Great Deliverance, the first of the series, finish it only to grab hold of Payment in Blood, the second Lynley/Havers adventure, etc. etc. The question then arises: In some cases, does crime pay?