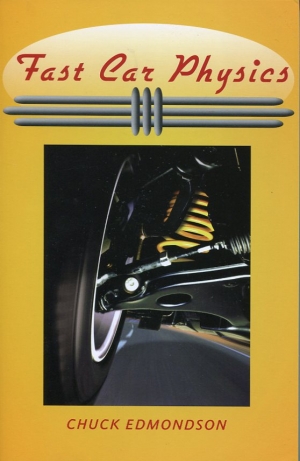 Although the title might indicate it as such, this is a book that covers total car physics, not just vehicle handling. As such Chuck Edmondon, a professor of physics at the United States Naval Academy and keen amateur racecar driver, covers the entire spectrum of how to improve a car’s performance.

He writes in his Preface that he has set out to understand racing from the perspective of physics. While this might immediately sound complicated and put people off, it is aimed at the level of high school and college freshman physics. But if you hate mathematics, equations and graphs, this is not the book for you.

The opening chapter deals with torque or horsepower and understanding the importance the respective curves as well as establishing a method for determining shift points for optimum acceleration. The following chapter deals with estimating 0–60 mph times and quarter mile times from torque curves in which the reader learns how to convert dynamometer data into approximate performance values and how to estimate the shape of the horsepower curve given a torque versus rpm curve among other things.

Other chapters deal with finding the racing line from a physics point of view, basic vehicle dynamics that takes into account the importance of the center of gravity, load transfer and static stability, tire construction and forces, aligning torque and longitudinal force and longitudinal slip. As would be expected, there is a large chapter on steering and suspension but the final chapter is perhaps a bit surprising as it concentrates on green racing which the author defines as the study of energy.

This is a very erudite book that explains in quite some details the physics of performance driving. It will not be everyone’s cup of tea but for those who want to know how it all works from the point of view of physics, this is a must-read book.

Fun fact: next time you watch the movie The Hunt for Red October pay attention to the submarine engineer; that’s Edmondson.

(The reviewer is editor of Race Tech magazine, a monthly technology-led motorsport engineering magazine; Moto Tech, a publication along similar lines on motorbikes; and Bernoulli, a very specialist magazine on racecar aerodynamics and vehicle handling.)