Hot Rod Magazine: All the Covers 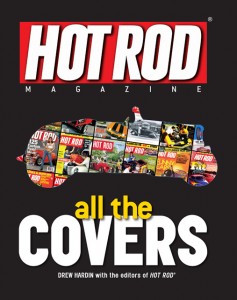 Since its founding in 1948, Hot Rod Magazine has as much reflected as shaped the hot rod movement in the US. It even preceded what today are the mainstream, middle-of-the-road consumer car magazines; in fact, its success spawned their success. The two Roberts who co-founded it, Petersen and Lindsay, saw it grow from a circulation of 5000 for the first issue to exceeding a million copies in its 20th year and peaking at 1.6 million in 1989. And all the while, “pure” rods—the dry lakes racers and street rods—remained on the fringes of the American automotive consciousness whereas certain subsets—like factory muscle cars and dragsters—crossed over.

“No one is blasé about being on the cover of Hot Rod. Even media-jaded celebrities are excited to be featured under the familiar red and white logo. Dale Earnhardt Jr., no stranger to the camera, said his cover shoot for the December 2007 issue was the fulfillment of a childhood dream.”

It wasn’t until 1997 that the great barometer for all things automotive, the Pebble Beach Concours d’Elegance, decided that historic rods were a significant enough phenomenon to implement a rod-related class—but only every other year, lest the sensibilities of its tonier constituents suffer unduly. So, from cobbled-together salt lake rat rod to trailer queen, for good or for ill, hot rods have come a long way. How better to ponder the journey than by looking at a timeline of 60 years worth of some 850 covers of its banner magazine.

It isn’t just the hot rod crowd that will appreciate this compendium but also the general automotive enthusiast and the student of popular culture, and last but not least the magazine designer. From graphics to colors, or the role of women (from demurely kissing their man good-bye to go cruisin’ in the 1950s to the gratuitous swimsuit models of later years), or So-Cal Speed Shop founder Alex Xydias to rock band ZZ Top, the magazine covers encapsulate six decades worth of changing times.

To make sense of it all, Drew Hardin, a former editor and editorial director of the magazine provides commentary. An entire chapter is dedicated to the formative first two years; the subsequent decades are given a chapter each. Each chapter begins with introductory remarks pertaining to trends in the industry—both rods and magazine. The text is augmented with the occasional reproduction of a page spread and archival photos.

All the covers in any one year are shown, with a particularly interesting one being singled out for in-depth treatment, be it the choice of topic/s, artistic treatment or photo shoot execution, commercial considerations (what goes where on a cover), etc. Hardin was able to interview many of the magazine’s past and present editors and publishers, but it is his personal experience as the wielder of the Editorial Pencil (at this and other automotive magazines) that lends his comments credibility and provides insight into the compromise-laden decision-making process of how to make a cover that grabs attention and sells magazines.

The deftly written Foreword by Hot Rod‘s current Editor in Chief David Freiburger offering the proverbial 64,000-foot view of the hot rod/Hot Rod world gives evidence that the current “deciders” have a full grasp of the magazine’s mandate and its place in the world in future.

The front cover design is noteworthy: the book jacket has a cutout of a hot rod in profile that is backed with clear cellophane through which you can see thumbnails of magazine covers printed on the outside front and back covers.