The Airplane: A History of Its Technology 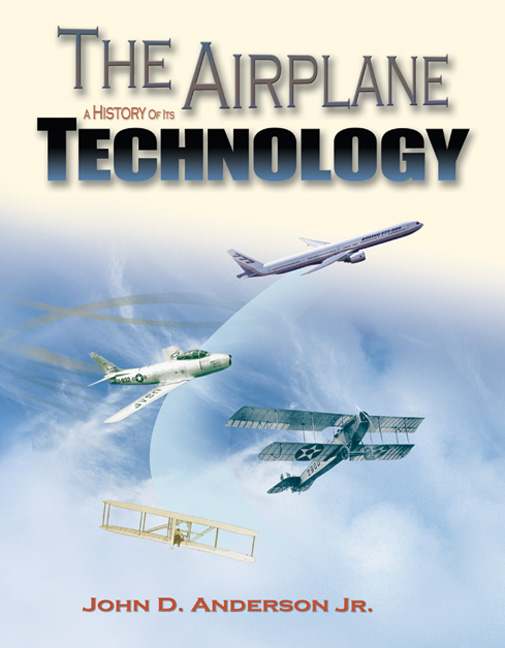 It is only natural that an event as momentous as the centenary of the beginning of powered flight should bring about a flood of books, including this one. Almost all such books begin with the Wright brothers—not the first to fly and certainly not the inventors of the airplane but the first to have a successful plane—and it is ironic to consider that none other than Wilbur W. once ruminated, in a fit of despair: “Not within a thousand years will man ever fly!” Instead, two years later champagne corks popped and life as we knew it changed immeasurably.

This is a clever book by a clever man. It deservedly won Outstanding Academic Title honors by the American Library Association and right from the Preface you see why the author was recognized as Distinguished Scholar/Teacher at the U. of Maryland of whose Department of Aeronautics he is Professor Emeritus.

For every budding writer, in fact, this preface should be the bar for which to aim. Anderson lays out his modus operandi, what sort of reader he has in his mind, explains his choices and concedes that a different writer would have made different ones—in other words he ticks off all the points a book reviewer would look for! Elsewhere he writes: “After you finish this book, I hope that the next time you get on an airplane, you will feel the history of its technology.” And you surely will because his writing is as inspired as it is inspiring, whether you are a reader who knows nothing of science and engineering or have a technical background and whether you read the book cover to cover or hunt and peck. Aside from his academic background, Anderson is also Curator for Aerodynamics at the National Air and Space Museum and the author of several acclaimed textbooks.

Rather than just beginning with the Wrights, Anderson examines the pre-history of aviation efforts prior to and in the 19th century. Da Vinci features prominently in this discussion, as do the scientific revolution and many names that probably are not in your everyday vocabulary. An important and not so obvious point he raises is that the schism between “academicians” and “craftsmen” created a “chronic technology transfer gap” that prevailed into the 20th century. The preceding will serve to illustrate the level of magnification Anderson brings to the task.

While the book is conversational in tone and sprinkled with quotes and anecdotes, heavy-duty scientific principles such as aerodynamic force (trigonometry; gasp) are explained and illustrated with minimal discomfort to the reader. Anderson treats an aircraft as a system combining aerodynamics, propulsion, structures, and flight dynamics and the book examines the parameters for and development of each of those aspects. Since many of the basic principles were developed early on the book is divided roughly 3:1 between propeller- and jet-engined planes (no rotorcraft).

This sort of book stands and falls with the quality of the written word and by that criteria this book is exemplary. The illustrations, on the other hand, serve their primary purpose—clarifying and supporting the text—but do little else. By and large they have no photographic or storytelling strengths, which is not helped by being small and b/w. Knowing what sort of photos already exist or could have been taken, their selection is uninspired. For example, many of the static shots are taken at the Smithsonian’s various galleries which was certainly convenient but yields such boring photos as display engines on their stands surrounded by placards, or planes dangling from the ceiling with lots of visual noise in the background. A little eye candy could only have made the book better. There are quite a few reproductions of interesting technical drawings (fuselages especially) from various international books from the 1920s.

A reader who is asked to part with $75 for a book never likes to hear that “time and space” did not permit the inclusion of this or that, in this case a longer Bibliography (which is just fine as is but its second page uses only 1/6 of the space, making the “space” argument tenuous). The Index is quite deep but does not include formulae.