Art of the Muscle Car 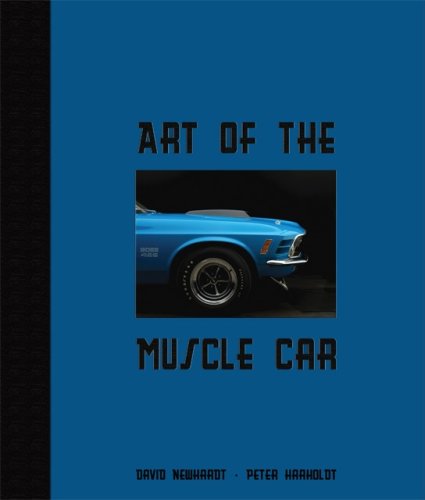 “But charm went out the window when the accelerator was slammed down. Part of the appeal of any muscle car is the whole-body experience; with the pedal down, the sounds, vibration, smells (Is that my clutch?), blurring scenery, and growing pressure on the back added to an intoxicating brew.”

Indeed. But this quote could just as well apply to supercars or any serious sports car. A muscle car is also defined—and hobbled—by a certain brutishness, a lack of refinement, a, shall we say, cheapness. For the latter aspect there is abundant photographic evidence in this book. If you have any sort of manufacturing background you only have to look at the photo on the title page (’69 Chevy) to cringe at the crude stampings. Cheap the cars may have been, back in the day, and even though today’s collector car market has cooled their prices remain at levels no original buyer would have dared dream of.

This book surveys some of the more emblematic specimens along with a few surprises. Philosophically, muscle cars of course harken back to hot rods: small car/BIG engine. You may in fact recall a book with a similar title and done by the same photographer, Art of the Hot Rod (with Ken Gross). The book here has the same opulent production values and mouthwatering photography but is very different in scope. In this one the focus is all on the cars, 47 of them, presented in chronological order from 1964 to 1974 on 4 to 8 pages each.

The number of books on this subject and in this manner is tremendously vast but author David Newhardt has imbued his with noteworthy qualities. Most of this large-format (11 x 12”) book consists of photos but it would be wrong to think that Newhardt’s words only serve to string the photos together. He has a number of muscle car books under his belt and contributed to several magazines—he knows his cars and makes his few words count. Condensed into the salient points and clothed into a sort of dry humor and clever turns of phrase (just consider the titles of the three sections: The Innocent Years, The Excessive Years, The Declining Years), he draws attention to each car’s key features and its place in the larger scheme of things. A recurring theme is that insurance regulations had as least as much, if not more, to do with the muscle car’s demise as the gas crisis.

As a photography major and later commercial photographer Newhardt has worn that hat on several of his projects but here Peter Harholdt does the honors, making this his second book of car photos.

We direct the reader to our other reviews of Harholdt’s work and will only say that the visual strength and technical finesse of the photography defy description, which, ultimately, is its innate purpose anyway. You know the adage of the true expert being the one who “makes it look easy.” The general reader will simply enjoy the photos as fully fleshed out compositions that show what one would expect them to show. But the photo buff turning these pages will have clammy hands. Perspective, elevation, close-ups—there’s only so much you can fix in post; the right idea has to have been there all along. Lighting is the make-it or break-it factor in studio photography. Conveniently, even if probably unintentionally, the book offers excellent case studies in the form of several examples of two shots of the same car being shown side by side (well, top to bottom) but lit differently. Observe the different highlights and reflections and how they enhance or detract from the cars’ features (especially pp. 92/93 and 130/131). The designer, too, will find here apples-to-apples scenarios that school the eye: how different color treatments or graphics affect the stance of a car (cf. p. 78/79).

The photos are not captioned but what they show is almost always self-evident. The majority of the cars shown here are otherworldly clean—not even a trace of a greasy fingerprint on a plastic cable clip deep in the bowels of the engine. One can only hope that they do get driven! Among the aforementioned surprises are a barn-find 1971 Challenger and a 1971 Javelin 401 in Alabama State Police colors.

The Index is perfunctory but this is not a loss as each car is called out on the Table of Contents. Intro by Brock Yates—you know what to expect there: a shot of that “Cannonball Forever!” and “Bring Me the Head of Ralph Nader!” fire and brimstone rhetoric. Interestingly, the first printing was sold out before it was even official released!

The Ambulance: A History »
« Via Corsa Car Lover’s Guide