XKD 603 Through the Lens of Time

The Storied Journey of a D-Type Jaguar 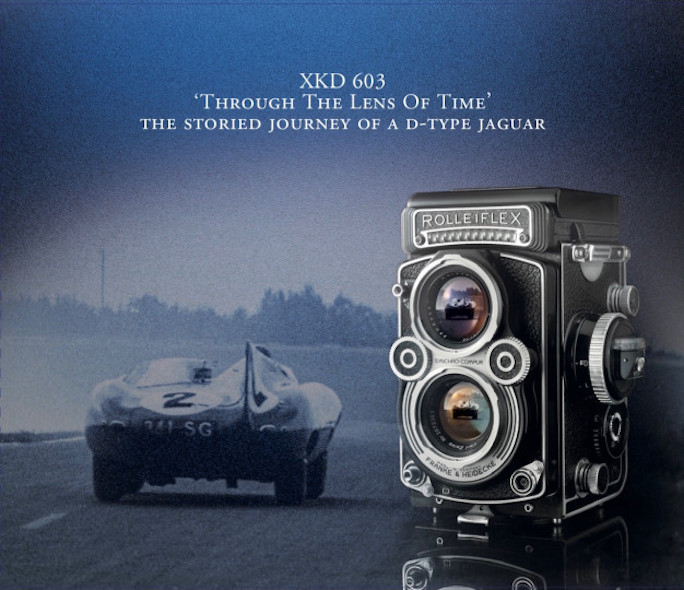 It would be clever enough, in view of the book title, to have thought of creating a collage of the car along with a (period-correct) camera. But it is worth drawing attention to the hours of work it took the designer to get that car picture onto the camera lens just so!

“The Long Nose D-type Jaguar, Chassis XKD 603, has an exceptional and unique history, having competed only at the sport’s highest level for all of her period racing career—1956 to 1959. During that time, seven different Le Mans winning drivers got behind her wheel and she competed in more World Championship and front line races than any other Jaguar, before or since, including four consecutive years at Le Mans. She raced in the golden age of the Works front-engined Maseratis, Ferraris and Aston Martins, each sporting their sublimely beautiful bodywork as they battled on the racing grounds of Spa, the Nurburgring, Goodwood, Sebring and Kristianstad, amongst others. Her drivers had to measure up against the ‘Gods of Motor Racing’—Fangio and Moss, Hawthorn and Collins, Castellotti and Musso, Hill and Gendebien, Shelby and Brooks and even Jimmy Bryan, Johnny Parsons, Jim Rathmann, A.J. Foyt and Troy Ruttman in their Indy cars.”

Indy cars? Racing against a D-type? Think “Monzanopolis”—wherein lies the reason that the Foreword to this book is written by three-time Indy winner Dario Franchitti. Well, also because he’s a Scot—XKD 603 is one of the Ecurie Ecosse cars—and a classic-car guy.

The 1957–58 Race of Two Worlds aka Monzanopolis remains a largely unexplored subject among the multitude of American/European face-offs that began with the Vanderbilt Cup of 1905.

Return to that intro above once more, and savor those names. Pretty special, eh? More special is that this 1956 ex-Works ex-Ecurie Ecosse race car looks and feels pretty much as it did then; it is one of the most original D-types extant—and it is the story of the car and the people involved in it more than the blow-by-blow history (racing stats, engineering minutia and the like) that give this book what author Clive Beecham hopes is its “soul.” The book’s title and subtitle frame that idea just right. 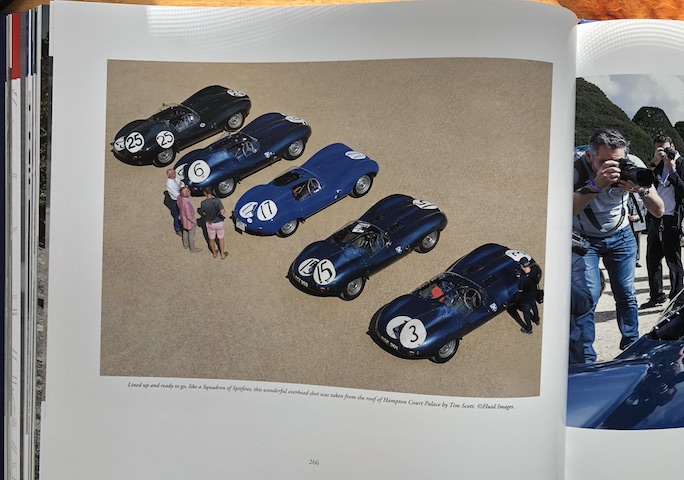 Beecham call his D-type “a Spitfire of the Road,” making this shot a squadron of Spits!

The book certainly has soul, and also intellectual heft and finesse in terms of bookmaking. But it follows an entirely different path from the only other notable book-length biography of a D-type, the 2015 Porter Press book about XKD 504. It beggars belief to accept that Beecham is a first-time author—and researcher/designer [1]/publisher—making it all the more remarkable that his book is such an uncommonly, exemplary even, well-rounded affair. Oh, he owns the car (not his first or only special-interest car) and has worked on researching it since becoming its fifth private custodian, in 2014.

So often, in books written by car owners, one ends up lamenting that this one best shot at presenting the fullest possible hi/story leaves out details because the writer, operating without an editor or other outside guidance, doesn’t recognize them as “important” or may think them too personal, or simply doesn’t have a firm and nuanced grasp of the Big Picture in which the public life of racing cars plays out. None of that is the case here. Posterity will have nothing to complain about except that there is no Index which makes it cumbersome to unlock all the book’s riches unless you take notes as you read.

On the right page an often seen Bernard Cahier photo of Stirling Moss at Sebring 1957. On the following page Beecham gives detail hounds a gift: another photo, surely new to most, that answers a rumor refered to in this caption—did Cahier hand Moss a bottle of coke, in the moving car, that Moss gulped down while driving his lap?

Now, as much as one wants to hold up this book as an inspiration to budding writers, the reality is that Beecham plays at an entirely different level, and that opens doors. Sure, XKD 603  is a multi-million-dollar car but more than that it is his standing as a pillar of the D-type community (mounting meets, tours, reunions etc., as he has done for cars of other makes) that prompts folk like, say Jaguar designer Ian Callum or Jaguar founder William Lyons’ grandson to contribute to the book. Also, all the previous owners have offered reminiscences, and David Murray of Ecurie Ecosse offers first-hand insights (not least in a recurring and usually amusing “As An Aside” sidebar) as do Aussie mechanic Ron Gaudion who ministered to the car on three consecutive Le Mans runs and 1957 time-keeper Hugh Langrishe, as well as people who have worked on the car or driven it in vintage racing. Resources of this caliber are not really available to just anybody who happens to have the wherewithal to own an important car!

It’s rare enough to see a D-type nowadays, let alone with the soft top erected. It was required by the racing regs and does come to the top of the windshield but you’d be hard-pressed to fit underneath it so it really is more of a tonneau cover.

A plethora of period photos and realia, the occasional piece of fine art, and modern-day imagery accompany lively text. Of note, along with the car Beecham acquired piles of paperwork including the super rare Works notebook of which pages are reproduced here.

Readers with a large frame of reference will come to understand why the D-type was so particularly good at Le Mans. To paint a properly full picture Beecham also references two dozen or more competing cars in full-page photos and text. Pondering his path to D-type ownership brings home the point that affinity for a particular model really is a highly subjective matter (it followed the sale of a much less loved Ferrari 275 NART Spyder).

A nice example of the author proactively putting out fires. That lovely transporter in the background is the famous Commer two-decker. It never hauled D-Types during their racing days because Ecurie Ecosse hadn’t replaced their two Leyland Tiger converted buses yet. The caption specifically addresses that. You’d think such foresight would be rewarded but, no, know-it-alls on the Almighty Interweb waste electrons on debating this.

The book is available in the UK through Chaters and in the US through Autobooks-Aerobooks. The standard edition is limited to 603 copies but they are not individually numbered; a special edition of 100 signed copies in slipcase were also produced but have already sold out.

A final and entirely peripheral point, made merely because it is a standard consideration in a SpeedReaders review: when a book is really top-notch, the occasional snafu sticks out all the more. On the typesetting side, umlauts and special characters are the victims. As to the former, look no further than the oft-mentioned Nürburgring. At least that mistake is consistently made whereas, for instance, racing driver Paul Frère is subjected to the indignity of having his surname spelled with three different accent marks, in at least one case on the same page—and sometimes without any at all. There are a very few typos but they do not warrant comment, rather, editor and proofreader deserve full marks for quality work.

Throughout, the photo captions are italic, serif—and, using a printer’s line gauge, all of 6 points tall (being ital it actually measures a touch smaller). While we know there to be reserved seating in Hell for people who do that to their fellow man, there’s no comfort in it!

Incidentally, you can meet author and car in a lovely 13-minute film on YouTube; type “the big six” or “cave bear films” into the Search field.