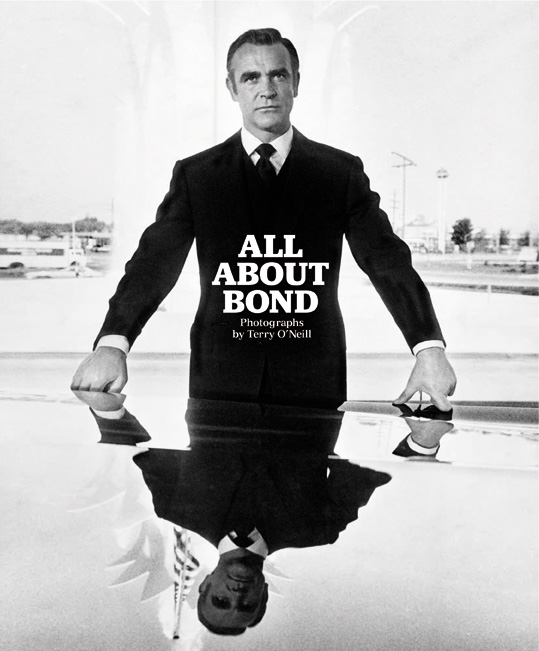 2012 was the 50th anniversary of the Bond films and it is obviously not coincidence that this book came out at the time the latest movie was released, Skyfall. But unlike the masses of merchandise that simply hope to cash in on the halo effect of the longest continually running and second-highest grossing film franchise to date, O’Neill can rightly claim to have had a very specific hand in its success. Beginning with that first Bond film in 1962 it was his photos from the movie sets that brought Bond home and helped popularize him.

When Bond creator Ian Fleming was still in the Naval Intelligence Division, he knew his next “mission” would be to become an author and “write the spy story to end all spy stories.” When Terry O’Neill picked up a camera he did not intend to become a photographer, let alone an iconic chronicler of the Swinging 60s in Britain. He wanted to be a jazz drummer in New York and the camera was, literally, his ticket: working for British Airways as a technical photographer would get him into being an air steward which would allow him to “commute” to his gigs.

Since this book is all about the photos we will stay with the photographer for a few sentences. That BA job entailed going to art school once a week and one of the class assignments was to photograph emotion. O’Neill figured an airport was just the place to capture it and one of his photos—already showing his eye for the moment, that quiet, clever casualness that would become his signature style—came to the attention of a magazine editor who hired him to work the airport every Saturday. A colleague there covering the celebrity beat died a few months later, O’Neill got that gig, and jazz lost a drummer. He didn’t think it at the time but does today: he and his colleagues and their pioneering off-the-cuff on-the-go portraiture on 35 mm film—as opposed to studio shots under controlled conditions—“created” the Sixties. It is useful to appreciate this so as not to look at 50-year-old photos from today’s jaded perspective that does not recognize the concept of privacy but to see them for the unstuffy newness and almost daring candor they ushered in then. Some of the photos in this compilation are obviously staged since that was O’Neill’s job as a set photographer but many are extracurricular snaps that have not been seen by many before. 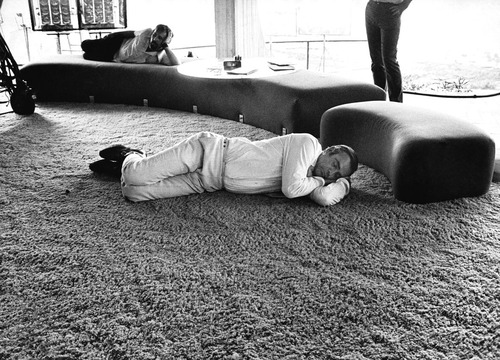 As the title says, the book is all about Bond. But it is not all about Bond. It is only about a few Bonds, movies, and girls. Except for a few of the cars it is not at all about the gadgets. There is no Preface or anything else to set the scene; the nine chapters are written by six contributors and it is left to the reader to either be able to infer or simply “know” their connection to the topic. The book opens with reminiscences by Godfrey Smith who worked with Fleming for a decade on The Times newspaper in London. Within a few sentences the parallels between Fleming and his protagonist become clear: cars, girls, martinis, living large. 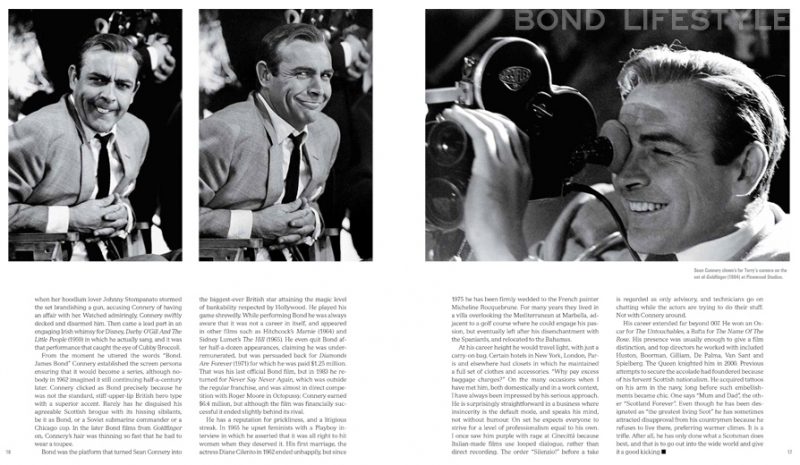 Several chapters are by George Perry and if you didn’t know he’s a well-known film journalist/critic and author of a stack of film books, you’d probably wonder why. He has interviewed a number of film greats and here writes about Sean Connery and Roger Moore as well as the 1967 Bond spoof Casino Royale. That it is Dylan Jones who comments on the sartorial side of Bond makes sense once you realize he’s the editor of the UK version of the men’s fashion and lifestyle magazine GQ. The car chapter by motoring writer Joe Dunn offers the briefest of summaries of some of the principal Bond cars.

Several Bond Girls—Honor Blackman (who also wrote her own chapter), Shirley Eaton, Joanna Lumley, Madeline Smith, and Maryam d’Abo—comment on their characters and the Bond Girl phenomenon in general. A closing chapter is by production designer Ken Adam who worked on several Bond movies and was nominated in 1978 for Best Art Direction on The Spy Who Loved Me. Why his chapter should be entitled “The Oscar Winning Designer” (he has won twice but not for Bond) seems as pointless as the book’s 6-page “Index”—which it could really use—that consists solely of thumbnails of every spread in the book.

Most photos are extensively captioned but it is not evident by whom. Car folks will appreciate that one caption singles out race driver Stirling Moss in a walk-on role as Peter Sellers’ chauffeur.

But, to say it once more, this book is about the photos and the photographer. He’s in his seventies now and if you’ve never known to recognize his distinctive music, fashion or movie photos before, you’ll now come to see it as a loss! The same publisher, a small independent specializing in high-quality photo books, also has his Sinatra and Elton John books.

A limited edition of 500 copies in slipcase is available from the publisher only.

First to Fly: North Carolina and the Beginnings of Aviation »
« Citroën DS: The World’s Most Beautiful Car