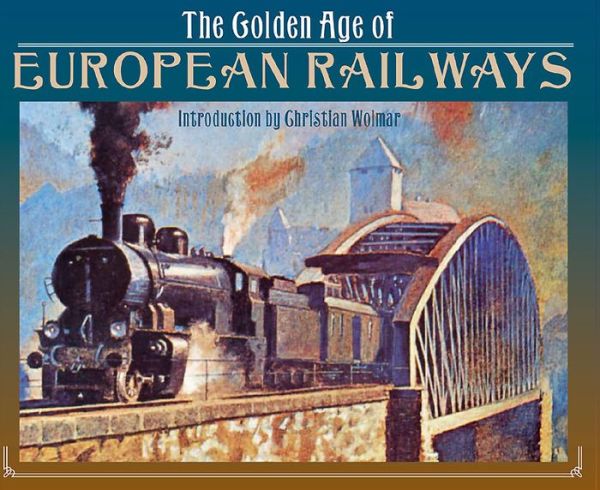 “Golden ages are elusive affairs whose very existence is hard to pin down. The posters, like all advertising, rarely reflected the reality and the railways did not always live up to expectations.”

Most of Europe seems to have transitioned at pretty much the same time, the 1830s, from horse-drawn carriages or cargo wagons pulled on short lengths of track to steam-driven locomotives, making possible for the first time—for better and worse—a form of transport that would change the way the world was run.

The paragraph containing the opening quote above ends, “Slow trains, dirty trains, infrequent trains, unsafe trains, old trains, expensive trains, uncomfortable trains—those were the complaints that could be heard across Europe from both rich and poor.” These sobering words come from someone with impeccable credentials as one of the UK’s leading commentators on transport matters, award-winning writer and broadcaster Christian Wolmar. While he really writes about pretty much any topic, the history and inner workings of the railroads seem foremost on his mind. He also wrote the superb Introduction, wide-ranging and insightful, to this pleasant, informative and, well, pretty book.

Long-time railroad photographer, enthusiast, and writer Brian Solomon is credited as “lead author” which may imply that Wolmar’s influence extends beyond the extensive opener in which he lays out cultural, political, and technological background and context. It establishes what history has obviously borne out, that the start-up difficulties did not keep the railways from spreading rapidly and lastingly.

Lavishly illustrated, the focus of this landscape-format book is more on the routes and infrastructure than the rolling stock. Beginning on the British Isles the writer/s present select lines, examining their origins, historical highlights, landscapes, stations and builders, inventors, and travelers. The same approach, if at a somewhat reduced level of detail, is then applied to the Continent: Belgium, France, Italy, Croatia, Greece, Spain, Portugal, Germany, Austria, Switzerland, Poland, Russia, Norway, Sweden and Finland.

There is much to discover about the railways here but also so much beyond that. For instance, the young nation of Belgium took an early lead in innovation because it recognized the nation-building and military dimension of rail transport while Switzerland was the last to join the club; Germany and France, so similar in industrial ability, went very different ways because of different political thinking.

The illustrations range from fine art to period photos (sometimes also modern ones which is a bit of a disconnect) to ephemera such as train schedules, postcards, travel posters and maps, maps, maps. While the latter are colorful and often large, and of course interesting and relevant, they are rarely dated. For that matter, not all of the photos are either. This doesn’t weaken the book, it just leaves some questions unanswerable.

The writing is fluid and a joy to read, the few typos mostly confined to proper names in foreign languages, and there are no obvious mistakes regarding events and basic history—except on one page (119) where three photos are said to be of Madrid, Spain but all the location names point to Lisbon, especially a reference to “Avenida 24 de Julho” which is an important date in the Portuguese Civil War because Lisbon was conquered that day in 1833 by the newly minted Duke of Terceira.

While jargon is kept to a minimum, for the benefit of the novice reader some words that are used in everyday speech but in a different context would have benefited from definition, such as consist or stock, ditto locomotive nomenclature (or do you know what 0-8-0 and 4-2-2 and 4-8-4 refers to??).

Appended are two pages each on classic locos, carriage design, and a few railway museums and sights (but no specifics such as addresses etc. are given). Bibliography, Index.

It won’t take any arm-twisting at all to spend hours and hours with this nicely designed book! Among the 50-odd books Solomon has written and contributed to is one that covers the US in similar format, The Classic Eastern American Railroad Routes.