The Woman Owner-Driver: The Complete Guide for Lady Motorists 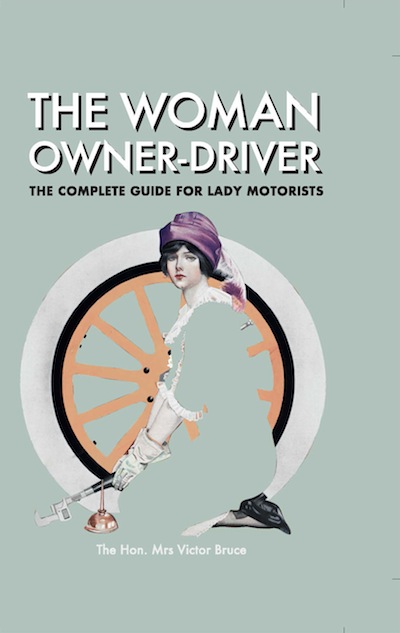 by The Hon. Mrs. Victor Bruce

“Different countries have different peculiarities in regard to driving habits. In Germany and Holland, for instance, one is apt to be embarrassed by the apparent determination of the many cyclists to disregard the rule of the road altogether.”

With apologies to bicyclists everywhere, this could have been written yesterday! But, as you can deduce from the cover illustration—and the ornate language—we must be time-traveling. (Incidentally, people were smaller then, and wheels bigger so the proportions of the drawing are not as cartoonishly exaggerated as you might at first think!) Anyway, it’s 1928 and the motorcar has been around long enough to have become commonplace, at least in certain circles.

But women behind the wheel? Is the world ready for it? Are women ready for it? For the few who are willing to defy convention and also have the means to flaunt their place on the food chain (running a car was not at all cheap then), this little book is a primer on road etiquette, essential skills such as starting the car and traffic rules, and practical considerations such as suitable attire, packing picnics or taking photos on tour. 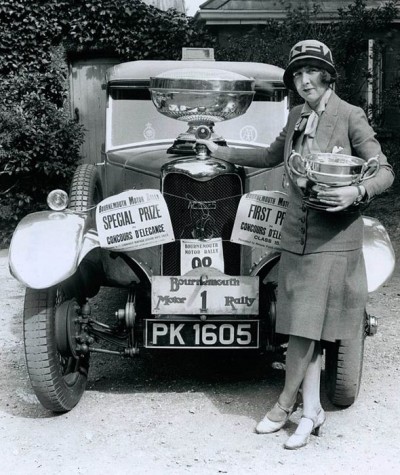 Read by itself, i.e. outside of the context of its specific era, the advice dispensed here is—to the modern reader—as quaint as it is, at times, pedantic or even strident. But that is exactly why it is important to go back to the primary sources to get a flavor for how things once were, without which there is no understanding of how things came to be the way they are.

The beauty of reprints of old material is that original sources are made easily accessible for a new generation to consult and enjoy, offering priceless “color” to add to all the learned treatises of a topic and era.

But the trouble with reprints of old material is that a reader years and decades after its first publication may no longer have an awareness of the importance of the writer or the topic. As to the former, all this book reveals by way of an introduction is that the author was “a pioneering motorist who set a number of world records for motor-racing in the 1920s—and was the first women driver to be prosecuted for speeding.” True enough, but there is sooo much more—speedboats, airplanes, horses, businesses.

Even before she married the aristocratic racing driver Victor Bruce in 1926, two years before publishing this book, her second, Mildred Mary Petre (1895–1990) lived a “racy” life, not least because it included an illegitimate child in 1920 with a wealthy landowner. She drove the Monte Carlo Rally in 1925 and won it in 1926. After the 1927 Monte she tacked on another 1000 miles to zip around Europe and North Africa and recorded the epic drive in her book Nine Thousand Miles in Eight Weeks.

The same year she drove to the Arctic Circle, broke the first of many records yet to come at Montlhéry, crossed the British Channel in record time in a speedboat, and took flying lessons—all the while dabbling in journalism. Hence this book.

Her presence in the dailies was, well, if not daily then frequent enough to be thoroughly intimidating and exotic. So much so that small minds, even some newspapers, sought to belittle her as “the flying housewife” after becoming the first woman to fly solo around the world.

What she had so say in these 14 essays here sounds dainty but comes from the school of hard knocks. No one, man or woman, big enough to applaud her accomplishments would or could dismiss the book as a fluff piece written by an armchair motorist spouting platitudes from a female perspective.

Keep all this in mind when you read this entertaining little book with its often enough timeless advice. She was a towering figure and she didn’t just have her “15 minutes of fame”—at the ripe old age of 79 she put in her fastest speed yet (110 mph in a Ford Ghia Capri), at 81 she got checked out in an airplane once more and then “looped the loop” in a Chipmunk. She was 94 when she died, having lived a life that is almost too fantastic to comprehend!

The Woman Owner-Driver: The Complete Guide for Lady Motorists

by The Hon. Mrs. Victor Bruce