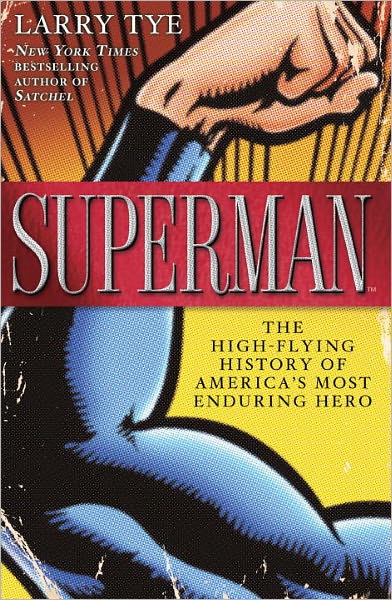 Oy Vey, Ya Allah, and Holy Cow! Superman as a universal religious symbol! Who knew? Well, as it turns out, a lot of people knew that ancient myths make for great story plots, including Superman’s youthful creators Jerry Siegel (story) and Joe Shuster (drawings). Born and raised in inner-city US Jewish neighborhoods, by 1936 these two high school underachievers and cartoon strip enthusiasts had subconsciously incorporated what they had been taught about right and wrong into their new comic book hero, Superman. The basic plot: a child from the heavens lands on earth and grows up to protect humans from evil, eventually dying (briefly) to save them. Not for money or fame, but because it’s simply the right thing to do. Truth, justice, and the American way.

But fear not, the religious undertones of the Superman story take second place to the lively saga of the people and corporations involved in the production and distribution of the Superman franchise. The author, Larry Tye, keeps readers’ interest high as he relates how Jerry Siegel and Joe Shuster sell their ownership of Superman for $130 to Major Malcolm Wheeler-Nicholson. Wheeler-Nicholson promptly loses the rights to two hustlers, Harry Donenfeld and Jack Liebowitz, who make millions as a result. Eventually Jack Liebowitz ends up on the board of Warner Communications and outlives everyone, dying at age 100 in 2000.

While the Superman phenomenon is taking place, the creators, Joe and Jerry, are struggling to make a living by drawing pornographic comic books (Joe), and failing at creating a successful hero to replace his lost hero Superman (Jerry). Eventually it all falls to the courts to decide as Jerry and Joe sue and plead for a taste of the revenue they signed away back when $130 seemed like a lot of money. With mixed success the suits would continue from the 1950s until the present day. Although Joe and Jerry both died in the 1990s, the legal battles drag on.

The book is well written and draws its data from a very wide and comprehensive list of sources. Everyone associated with Superman, including comic book writers and illustrators, as well as radio, television and movie actors, producers, and directors are all quoted and worked into the story line. Out of all this information comes a story as fantastical as a Superman plot.

Another aspect of the general comic book story touched upon that I had totally forgotten: in the early 1950s “. . . 70 percent of adults now believed that comic books were at least partly responsible for juvenile delinquency.” As I recall, I had to get my comic book purchases reviewed by my mother, and I still got into trouble from time to time. Countering that frightening statistic is another equally depressing fact: “The number of unique words in a year of Superman comics was twice the vocabulary of the average fourth grader, studies found, and reading his adventures could help adolescents expand their language.” Either way, the 1950s looked bleak for the kids. Then television came along and Superman became something the whole family could watch. To heck with reading.

The book starts out with a Preface, a Table of Contents listing 11 Chapters (from “Giving Birth” to “Till Death Do Us Part” and “Tights and Fights”), followed by Acknowledgements, Appendix: Superman’s CV (he belonged to eight professional organizations, and one of his vulnerabilities was an “unbending moral code”!), then Notes, Bibliography and Index. The Notes are worth scanning for more detail. The Bibliography at 44 pages is almost overwhelming unless you are a Superman fanatic. A 20-page Index closes out the book nicely. For an interesting 20-minute audio interview with the author, Larry Tye, click here.

A Century of Sea Travel: Personal Accounts from the Steamship Era »
« Porsche 901: The Roots of a Legend