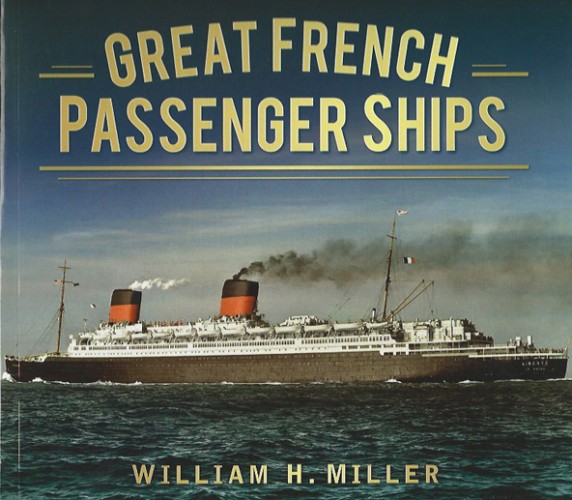 “There is no question about it; the French went on, from 1912, to create some of the finest interiors on the seas. In addition, their on-board kitchens and hotel service often garnered enviable reputations. It was said, even by the 1920s, that more seagulls followed French liners than any others—the scraps of food were so much better!”

If the scraps were so good just imagine how grand the actual meals must have been! The British and the Germans may have built liners twice the size but it was the opulence and finesse of French ships that really did capture the ocean-going public’s imagination. If you didn’t already know that a great French liner was nicknamed “the floating Ginger Rogers” this may be just the right book to tickle your interest.

There’s a reason the author has a nickname too, “Mr. Ocean Liner.” He practically lives on them, having made some 400 voyages by now, and he writes and lectures about them seemingly every waking minute. Over 80 books, a thousand articles, his own quarterly magazine, dozens of TV shows. You can’t say he isn’t fully committed to his subject! 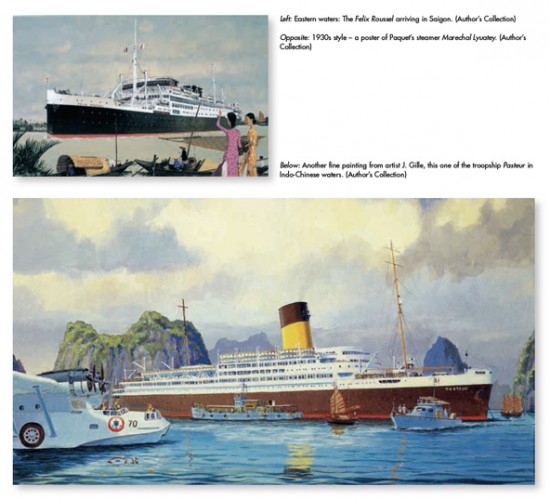 This little book very much has the feel of one of his lectures: a breezy Big Picture overview, peppered with facts and anecdotes and quotes. It’s the sort of thing he can probably deliver extemporaneously over a few cocktails, not least because he also was a teacher for over three decades—which once earned him a proper title, not just a nickname: “Teacher of the Year.”

While Miller writes about all ships big and small and sailing under any flag, it is relevant to this particular book that he was the curator for a 2011 exhibit in New York on the superlative 1930s French liner Normandie. That ship is of course included here but the book begins and ends with two ships named France, the 1912 and the 1962 versions. This is not just for semantic symmetry but because these two ships represent the beginning and the decline of the Halcyon days of France as a major player on the liner scene. 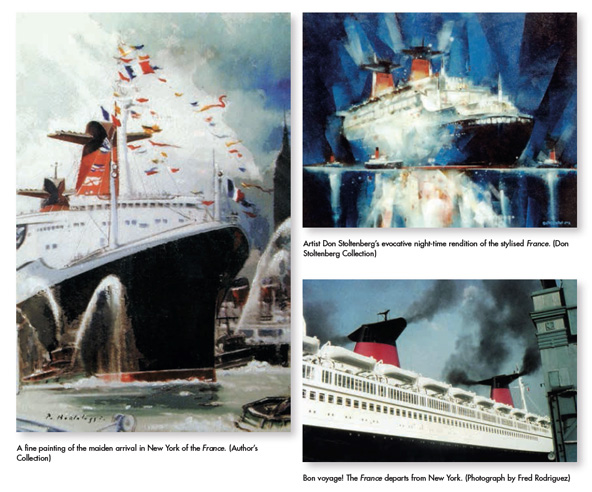 Miller looks at individual ships on the North Atlantic routes but also considers colonial traffic and the various roles ships were forced to play during wartime and the Great Depression (“Old General Depression will not be allowed up the gangplank; these cruises are planned to make Time—which all economists say is the cure—really go to work for you!”).

This is only a 96-page book of modest dimensions so any expectations of encyclopedic minutia are misplaced. Miller uses quite a few quotes from the classic texts and a Bibliography points the reader so inclined to other sources. For what it is, this book is just right in regards to scope and selection. The variety and suitability of the illustrations give an entirely satisfactory impression of the ships in their time—some photos are in fact previously unpublished—and there are even travel posters and quite a few examples of fine art. 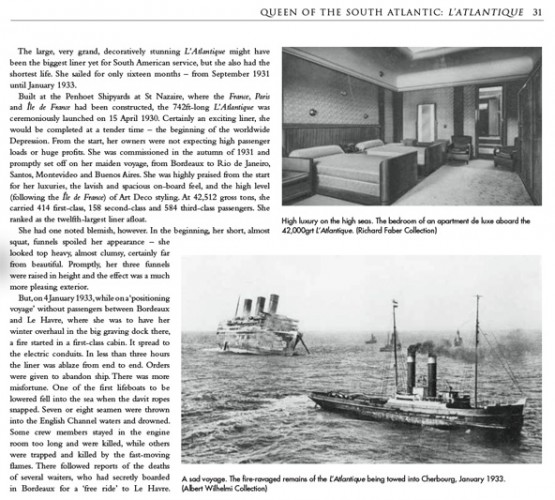 One other aspect that distinguished French liners is not ignored and that is their peculiar proclivity for catching on fire—not because of any technical shortcomings but “human factors.” One particularly dramatic photo shows the Paris lying on its side (1939), tipped over by the weight of the firefighters’ water.

If you consider that the aforementioned France sailed for the first time a mere five days after the indomitable Titanic had sunk, you can appreciate that travel on an ocean liner affected people’s psyches for better as much as for worse.

The History Press, 2014   [In US: Independent Publishers Group]