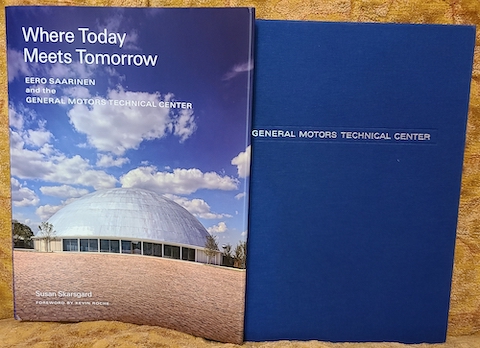 About a third of the way into Where Today Meets Tomorrow the opening lines of the fifth chapter provide a clear and succinct description of the details of the foregoing 97 pages. “Twelve years had passed since the first discussion between Alfred Sloan and Charles Kettering about the idea of relocating GM’s technical staffs to a campus in suburban Detroit. More than eight years had passed since the project had been embraced, designed, excavated, halted, abandoned, and resurrected, during which time the architectural lead role passed from father, Eliel Saarinen, to son, Eero Saarinen. The cost had initially been estimated at $20 million, then revised to $25 to $30 million . . . before eventually ballooning to $150 million by the time of its completion.”

What that paragraph doesn’t say is that the project itself had grown as development and then construction was progressing. Additional buildings were added that had not been part of the original plan such as a building to house an operationally useful wind tunnel and a gas turbine laboratory. And a 1-mile “check road”—which most would, and did, call a test track—was laid out and built as well as the just shy of 1.5 miles of underground tunnels that connected all buildings so that anyone could walk from one to another without ever going outdoors in Michigan’s inclement weather. Certainly not an inexpensive undertaking to design, excavate, and then build and re-landscape. Then there are the 25 miles of above-ground walkways and the not quite 20 miles of roads. 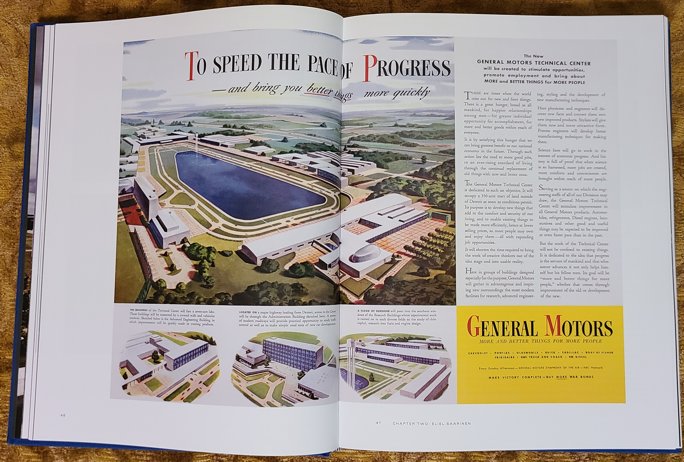 This is a two-page print advertisement that GM ran in 1945. It does not reflect what Tech Center actually looked like when it was dedicated eleven years later but does give you an understanding of the scope and magnitude of the project.

Today the entire 710-acre campus consists of 40-some buildings where just over 20,000 designers, engineers, and their support staffs work. Best of all, it continues to serve GM’s needs every bit as well as when it was originally conceived and built nearly two-thirds of a century ago in part because it has never stopped growing and changing as needed.

To this day too, GM’s Tech Center is looked upon as a significant example of mid-century modern design and more. It was a significant contributor to the development of special ceramic finishes for exterior brick walls; to the innovative interior and exterior modular construction which necessitated developing honeycomb interior wall panels and; quite literally, inventing the neoprene sealing gaskets that enabled exterior glass curtain wall modular components to seal out rain, snow and whatever else mother nature chose to throw at it.

There are more—lots more in fact—technological innovations, some of which GM patented. The construction of its Tech Center was very much “planning forward.” The dramatic floating staircases are another example as is the styling dome, interior and exterior alike. All are described and shown in detail from conception, design, through actual construction on this book’s pages. 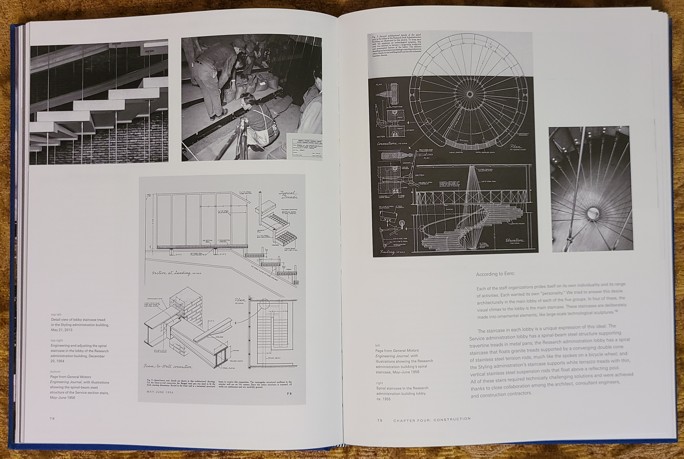 These pages are examples of the type of detail in the book of the design and construction of the floating staircases. 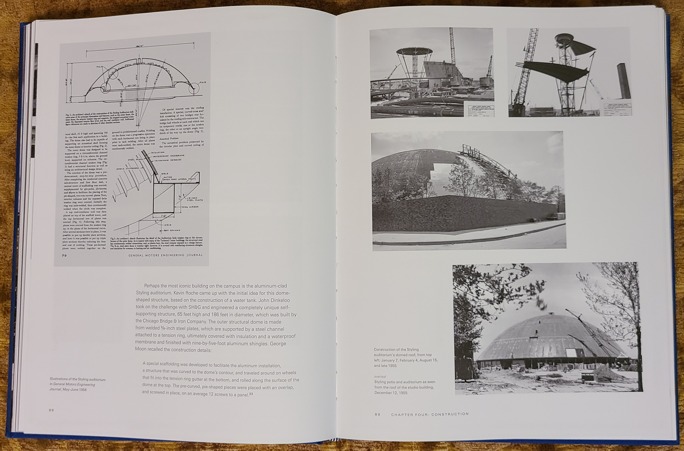 These pages are examples of the type of detail in the book of the design and construction of the 65’ tall, 186’ in diameter Styling Dome that is sheathed in 9’ 5” aluminum shingles that are just as shiny today as when originally installed.

Today—in the 2020s—Tech Center is internationally recognized. In 2000, it was listed on the National Register of Historic Places and, fourteen years later, designated a National Historic Landmark. Decades earlier, in 1986, the American Institute of Architects named it the most outstanding architectural project of its era—a distinction that is wholly due to the Saarinens, father and son.

Author Susan Skarsgard is herself a design staff alumni and the founder of GM’s Design Archives. She has told the story of Tech Center’s creation by conducting interviews, utilizing photographs, architectural drawings, and sourcing documents and other ephemera and utilizes many of them to illustrate her words. Princeton University’s Architectural Press has done an equally stellar job presenting Skarsgard’s work in printed, hardbound form.

One of Skarsgard’s primary sources—among many—was an unpublished manuscript written by GM designer named George Moon who had been assigned by his employer GM to work on the Tech Center as it was being built. As I was turning the last few pages of the book, I was offered the opportunity to read that manuscript. What a treat as Moon does something that would have been inappropriate with Skarsgard’s book; he profiles from personal interviews many of the key people which gave me added understanding. And, as Skarsgard’s words were fresh in my mind, it became possible to see where she’d drawn or relied on Moon’s manuscript which is also supported by her chapter end note references. 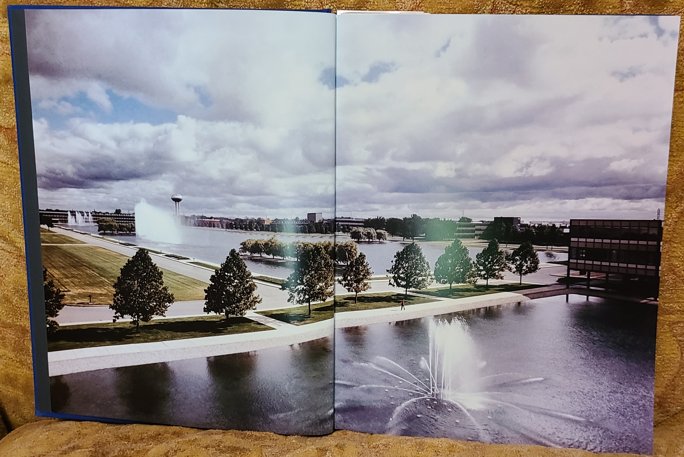 Overview of the 22-acre lake with its two main fountains; furthest from the camera is Dancing Waters created by Alexander Calder; middle is the 115’ long Wall of Water that shoots 50’ feet up; nearest is one of the smaller fountains that adorn other water features scattered around the campus. Also clearly visible is the 137’ 10” tall, 250,000 gallon water tank.

This particular book is, beyond refute, a very special tome with its high-quality content, image reproduction, and overall quality of production and presentation. Do not deny yourself . . . be you interested in the transportation or architectural matters or both.

Posted Under: Architecture, Other Genres | Author: Helen Hutchings | No comments yet