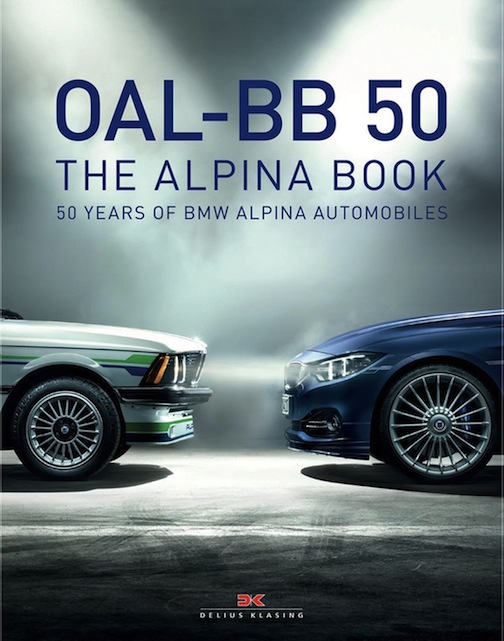 “All pathos aside, this book is based less on feeling than on facts—archive materials, test results, race results and driving reports, all verified as far as possible and compared with the experiences and opinions of makers, associates and critics.”

(German and English, side by side) If the word salad that is the main title makes immediate sense to you—then you must be an alpinist, with a capital “A,” meaning not a mountain climber but an enthusiast of Alpina, the Bavarian company that started as a tuner and BMW specialist and has grown into a certified vehicle manufacturer with easily 1500 cars a year.

This being the firm’s 50th anniversary year, a 50-chapter book is just the way to commemorate it. For the whole of that time, Alpina has been closely and exclusively associated with BMW which will celebrate its 100th next year.

To explain the book title, it’s styled like a German license plate and references Alpina’s hometown, founder Burkard “Bubo” Bovensiepen’s initials, and the anniversary (one can’t help but wonder how this book will fare in title searches). And “Alpina” may well have to do with the Alps—the firm is in Bavaria, Germany—but was inherited from Bubo’s father’s office machine company.

That the man features prominently in the book (as do his sons who started to become pretty involved over the last 15 years) while still alive may cause readers to wonder if Tumminelli’s text will be merely a polite pat on the back. Not to worry. On one page early on he writes, “A song full of praise is, however, not only suspect, but also sounds boring” which is further underlined a few pages later: “As we quoted forgotten deeds and used words here and there that no person would like to see written about them and their own work, not only was BB clearly amused, he also sharpened the texts himself.” This is an important sentence because it already hints at the character of the man, which would become inseparable from the character of his cars. An Alpina car, you see, is not just a blingy poser with an aero kit, supersized wheels and bleating exhaust, it is a serious machine, an answer to a question. 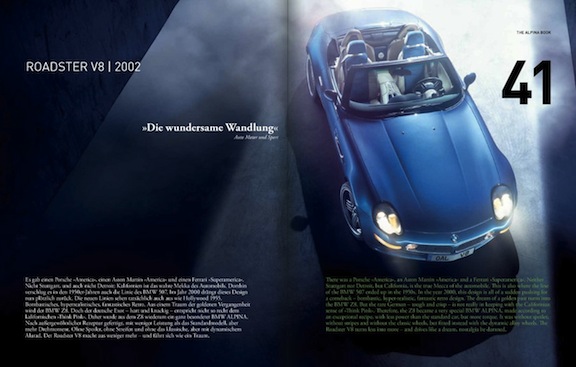 Tumminelli, who did have to put in some seat time in an Alpina (one of the 50th anniversary B10 Bi-Turbos in fact) to get a proper feel for his topic, brings an absurdly long list of qualifications to the table. This professor of design (Cologne International School of Design) is not just a podium-pounding academic but was a practicing designer at Alfa Romeo and Momo, head of strategic marketing at German porcelain/tableware maker Rosenthal, and founder of brand- and design consultancy Goodbrands GmbH and Goodbrands Institute for Automotive Culture. He publishes and lectures, and judges at the Renault Traffic Design Awards and the Red Dot Design Award. His automotive design column is published weekly in Handelsblatt, Germany’s premier economic and financial magazine. Design in all its manifestations and how humans react to it are at the core of his work. 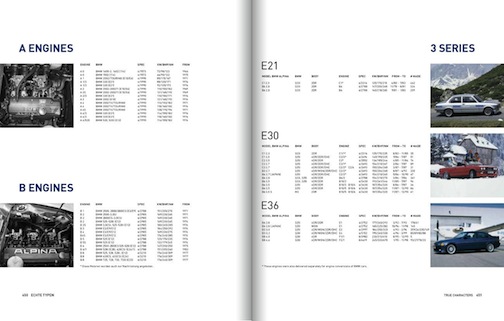 With such serious credentials and an author embedded in that “color within the lines” German take on life one might well expect a book that is measured, ponderous even, facts and stats, all neatly strung together. Instead, this book takes a hilarious tone bordering on the irreverent, full of puns, double entendres, figures of speech. This is most evident in the German version, the English language not possessing such distinctions between formal and informal to begin with. That said, the translator did an impressive job preserving the sparkle. 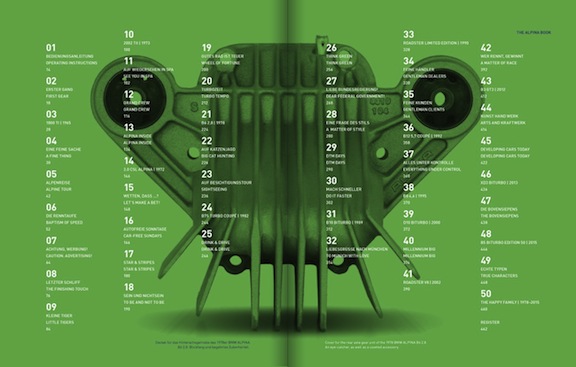 On the one hand, Tumminelli describes the text as “chronologically nonlinear and stylistically schizophrenic.” On the other hand, BB is said to be “strongly opposed to any kind of chaos” and while that is intended to apply to his cars, he did go over every word in this book so it can’t be that schizophrenic. What that probably means to say is that the book is organized into themes and also touches upon unexpected topics such as BB’s taste in office furniture and his love of wine which spawned an entire business enterprise of its own.

Blue and green are prominent colors in the Alpina world and that’s why they’re used in this book; the German text is mostly blue and the English always green, the latter not a happy choice when overprinting dark tints (in which cases the German smartly switches to white). 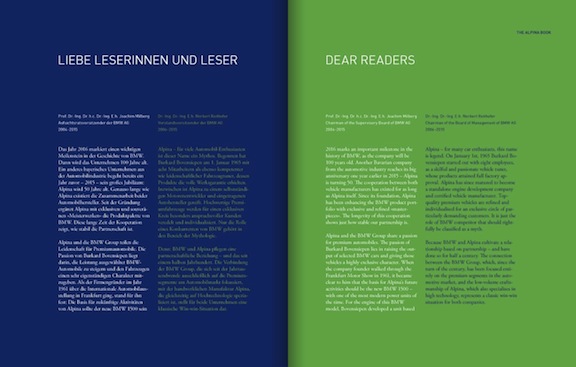 Everything you’d expect to find and much you don’t is in this book. Read it cover to cover in one setting or, better, pick it up anytime atrophying facial muscles need to be relaxed by a grin. Tons of ads and brochures are reproduced, photos of the workshops and parts show what happens where, and, of course, there are the cars.

Appended are motor and vehicle specs by series; a rudimentary index contains proper names only. 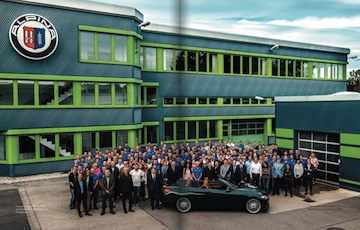 BB once described his cars as “a very good buy for the driver for whom acceleration was of great importance and who also likes to annoy the odd Porsche.” This book—clever, original, entertaining, printed on substantial, matte paper—is a very good buy!